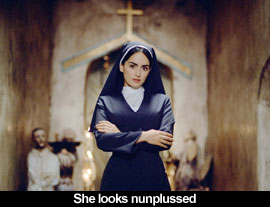 by Walter Chaw Nearly unwatchable from an aesthetic perspective, Nacho Libre is also invasively offensive and cheap-feeling in its gags, its performances, and its targets. Lampooning Mexican professional wrestling seems an onanistic pursuit at best insomuch as, clearly, the sport is already busily in the process of self-parody--but letting Jared Hess (single-handedly bringing the Special Olympics to Wes Anderson) tackle it along with Jack Black doing an "oh Ceeesco" accent in skin-tight tights is a particular kind of torture. The film's going to have its defenders (Uwe Boll has his defenders, too, I hasten to add, as does Hess's Napoleon Dynamite), and I'm thinking that it's going to be along the lines of "Well, sure, it's not Citizen Kane." But does anyone go to anything expecting it to be Citizen Kane? Moreover, have people who like this bullshit actually seen Citizen Kane? It's germane to talk about this because sooner or later it has to be pointed out that pictures like Nacho Libre exist because pictures like Napoleon Dynamite were popular: mean pictures about small-minded folks picking fun for no profit at slow-witted caricatures of racial groups and social classes. Pictures like this exist because people are used to lowering their expectations so much that they're actually irked when someone doesn't. It's most instructive to take a minute to look at how low we go now to construct the straw dogs we mock.

The Hispanic-loathing subtext of Napoleon Dynamite finds full flower in Nacho Libre, naturally, as Nacho (Black), the cookie at a monastery that harbours sadsack orphans, dreams of the riches and women that come with being a top-flight luchador on the Mexican wrestling circuit. The film also loathes fat, though it takes an ambiguous stance on midgets and beautiful nuns (represented by Ana de la Reguera), and it can't be too bothered to give Nacho a heart in that mighty chest of his to forgive his sins of lust and greed. It's a movie without a hero (and even Cheech & Chong were the heroes of their own films), a lot more like Hess's Napoleon Dynamite than like co-screenwriter Mike White's Chuck & Buck in that regard, but its one saving moment is ineffably Chuck & Buck-like: an amorous senorita (Carla Jimenez) pursues Nacho's sidekick Esqueleto (Héctor Jiménez) through a series of "secret tunnels" unaccountably burrowed into the walls of a palatial villa. The image of it is so delightfully bizarre that all at once the forced, almost Brechtian, artificiality of the piece comes clear as intent rather than sloth--if only for a moment. The rest of it (Nacho passing wind when he leaps, Nacho clenching his ass, Nacho drawing childlike pictures, Nacho taking a dump, Nacho blowing raspberries, Nacho replicating the eagle-egg gag from Chris Farley's Almost Heroes, Nacho calling his shirt a blouse) is unimaginative juvenilia marked by a strange obsession with loud foods and a peculiar preoccupation with eye violence. If you're the kind of person who thinks it's funny that a person with a pidgen Mexican accent sounds like she's saying "poopies" when she's saying "puppies," have I got a movie for you.

A "Battle Royale" towards the end of the film features a tall black wrestler named "Snowflake" and a Chinese guy named "El Chino"--satire, if you want to call it that, of either the lubricated showiness of pro wrestling or the callow stupidity of the audience for the same. It's an umbrella that stretches broadly enough to envelop the audience for the film, too. See, I suspect that Nacho Libre is a film that imagines itself as somehow above itself, as commentary on the ugliness of its conception and execution instead of just a pig wallowing in its own slop. I like to think that because it's more reassuring to think it than to suppose that in the year 2006, there are still assholes who believe that making a film that essentially gives idiots the permission to say stupid things in a revolting, derisive accent without a healthy dose of self-awareness and intelligence is okay. (Take this flick with the Hills Have Eyes remake as pictures in 2006 that hate all over their audience.) It's disheartening to try to explain to folks that Napoleon Dynamite is comedy sprung from our basest bullying instinct--and it's that much more disheartening to have to point out that Nacho Libre is about how funny our musty stereotypes of Mexicans are because of the way they talk and the things they like to watch. The joke's on us, though, because we're the ones lining up to throw our cash at this piece of shit. Oh Ceeeesco. Originally published: June 16, 2006.