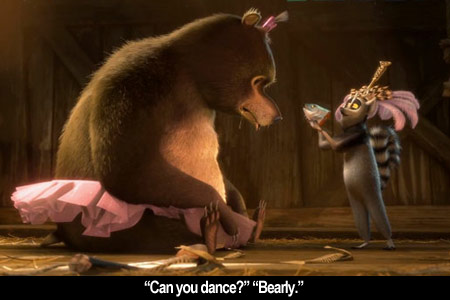 by Walter Chaw Madagascar 3: Europe's Most Wanted (hereafter Madagascar 3) is easily the best one yet and the product, I'll bet, of co-directors Eric Darnell and Tom McGrath's foray into the rigors of gag-writing for an animated TV series ("The Penguins of Madagascar")--though I wouldn't discount the influence of credited screenwriter Noah Baumbach, either. Madagascar 3 is deeply involved in surrealism, rivalling Disney's pink elephants on parade in a circus sequence that, if not as good as Dumbo's, is not as good because it's scored by a genuinely dreadful Katy Perry song. The picture's so cheerfully, indefatigably strange, in fact, that at times it approaches the Golden Age of Looney Tunes. It's an effervescent little artifact housing a psychotic, bestial gendarme named Capt. Chantel DuBois (voiced maniacally by Frances McDormand), who, in a moment of extreme cultural insensitivity, rouses her comatose henchmen with a rendition of Edith Piaf's "Non, He Ne Regrette Rien," right there in an Italian ICU. The picture is lawless in this way: Chris Rock's Marty the Zebra has never been blacker (his signature song this time around has something to do with a circus afro), David Schwimmer's Melman the Giraffe was never more of a kvetch, Bryan Cranston's Russian tiger Vitaly is depressed and bellicose, and Martin Short's brilliantly-conceived sea lion Stefano is enthusiastically, effervescently, Roberto Benigni-stupidly Italian.

They're broad caricatures, all, but Madagascar 3 gets away with it by being good-natured and frequently hilarious. It has a lemur fall in love with a sub-vocal circus bear as our heroes--Alex the Lion (Ben Stiller), Marty, Melman, and Gloria the Hippo (Jada Pinkett Smith)--try to make their way back to Manhattan on the coattails of a moribund circus abandoned midway by its human owners. It's an empty premise given some pretext of tension by the pursuit of DuBois, to whom the animators grant a heightened olfactory sense and what seem like backwards-hinged joints that let her scuttle about like a Gallic cockroach. The action scenes are on a par with those in Spielberg's Tintin; the movie avoids dead weight, such as the romantic subplots that bog down a surprisingly high volume of animated fare; and at its end, Madagascar 3 rejects a lifetime of captivity in a zoo for a lifetime of captive performance in a zoo. But hey, the circus here is a Bradburyian thing all of summer nights and the promises of freedom in a life on the rails--marking it as a quintessentially American picture, despite its largely European setting. America, after all, becomes the Emerald City again in this movie's eyes, and the promise westward holds fresh allure. That's good enough for me.

If there's a major theme unifying the Madagascar trilogy, it's this desire for freedom, and there's something sweet in this final (?) chapter that suggests there's nowhere left to be truly free, except a past we'll agree to pretend was different from the present. Something nostalgic in there; blame Baumbach. For the rest of it, Madagascar 3 is high slapstick carried off with verve and timing. Stefano deserves his own feature spin-off, Puss in Boots-style, and I admire that for as stretchy and physics-defying as it all is, it declines to show the most impossible trick in favour of a gag involving the transference of Marty's circus afro. There are lines ("My tears are real--you are fake") that made me laugh days after, and Vitaly mutters some kind of double entendre halfway through that I missed and wish I hadn't. Best of all, there's a moment where Stefano is trying to follow a story Alex tells that ranks right up there with Chris Klein asking Heather Graham if she has a robot in the otherwise completely forgotten (by me as well) Say It Isn't So--a timeless bit of comedy, perfectly timed/brilliantly executed, in the middle of somewhere you by every right did not expect to find one. Madagascar 3 is great. Even in 3D.

I see the movie as having integrity. What would be throw-away jokes in other animated kiddie pics receive enough of a follow-up in this one that they become successful as a self reference even if they might have fallen flat initially. It reflects a confidence that the writers and performers have in their material that's refreshing. It reminds me of some Pixar films that way.

Also, great physical characterization by the animators. There's a fair amount of more subtle humor going on in the expressions of the characters that helps make the movie more funny without making it more joke-y. Maybe it's just me, but conspicuous jokes have been getting more on my nerves lately. I'm looking at you, Avengers.