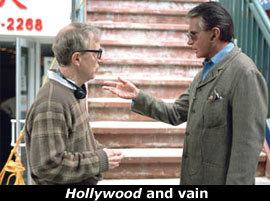 by Walter Chaw Woody Allen's pictures are exhausting things about absolutely nothing save Manhattan and Woody Allen--Allen's fascination with the cinema and younger women, Allen's disingenuous fear of writer's block, and more recently, Allen's desire to reconcile with his children. Sometimes any one of those is enough.

Hollywood Ending is Allen's latest film about a film (just like What's Up, Tiger Lily?, The Purple Rose of Cairo, Stardust Memories, and Crimes and Misdemeanors)--and it's not enough. The twist here is that the variety of blocked artist Allen plays is for the first time a failed feature-film director (the failed documentary filmmaker in Crimes and Misdemeanors notwithstanding)--an occupation according the famed hyphenate more opportunities to take pot-shots at the same people with whom he goes to bed in his Manhattan island paradise. While indisputably among the best and most innovative movie satirists of all time (films like Sleeper, Annie Hall, The Purple Rose of Cairo, Zelig, and A Midsummer Night's Sex Comedy have cemented his reputation), The Woodman's films too often wear us out to no good purpose, unless you count giving Sven Nykvist something to shoot every couple of years and catering to the intrinsically limited (but guaranteed) box office from his built-in New York (and French--Hollywood Ending opens this year's Cannes Film Festival) audience.

Allen plays Val Waxman, a New York-based director driven by his own fears of failure, natch. Ruled by a certain former stand-up comedian's whining diarrhoea of the mouth, he's partial to anachronistic soundtracks featuring Artie Shaw and George Gershwin, and guilty of being very interested in women roughly a third his age. Val is living with bimbo starlet Lori (Debra Messing) while pining away for his ex-wife Ellie (Téa Leoni), who has sensibly left him for sunnier climes and the arms of virile Hollywood producer Hal (Treat Williams). Along the way, people throw wisecracks at Val/Allen's affection for Swedish cinematographers and his fall from critical and popular grace.

There's a speech about "artistic masturbation" in a picture probably best defined as such (the movie's so "insider" that it's at times incomprehensible)--and, not coincidentally, the film being shot within Hollywood Ending is repeatedly referred to as "incoherent." Right after Val develops psychosomatic blindness at the start of shooting his "comeback" film, Allen reverts to the slapstick shtick that defined his early career. (Sadly, for all the pratfalls from scaffolds there is not one moment equal to the subtlety and brilliance of Allen pitching a record out of its sleeve in the act of pitching woo.) What happens, in other words, is Allen manifests himself at his most unpleasant, simultaneously flipping the bird at the suddenly unkind critical community ("Critics are the lowest form of culture," Val's rat-eating punk son helpfully opines--he apparently still living in the Sid Vicious '70's just as Woody is eternally mired in the Roaring Twenties). It is a condemnation all the more hollow for the fact that it appears for the entire world that Allen is taking his detractors' main complaint to heart and returning to the kind of free comedy genre in which he once so excelled.

Allen engages here in his same old same old giant's shoulders standing (where else but an Allen film and the student union can you unerringly find first-year liberal arts undergraduate musings on Kirkegaard, McLuhan, and Rules of the Game?), but this time he sees himself as the "giant" from which he both borrows and meekly offers homage. It's no accident that where in Manhattan Diane Keaton was "one Bergman crack away from a punch in the mouth," now in Hollywood Ending, it's all of Woody's own critics receiving a celluloid knuckle-sandwich.

The result is predictably tedious. Hollywood Ending feels snippy and defensive, its best moments coming in the un-subtitled, unscripted invectives of Val's Chinese director of photography (which might have derived from his collaboration with Zhang Ziyi's cinematographer Fei Zhao on Sweet and Lowdown; one gem translates roughly as, "In what devilry is this white devil engaged?"), and Benny Cheng's performance as the hapless translator go-between who knows of Val's secret blindness and is enlisted to be his "eyes" for the first few weeks of shooting. The performances are weak discounting Leoni's, whose warmth is the only source of light in the film--though not even she can sell her declaration of love for Allen's absolutely insufferable Val. After decades of the same fetishistic folderol it's become impossible to separate Allen's off-screen peculiarities with his on-screen dalliances. The shame of it is that Hollywood Ending invites those comparisons. Worst is Allen himself, displaying little of his gifts for physical comedy in a performance that moves beyond farce into ineptitude. A scene he shares with poor Treat Williams in a hotel suite is especially leaden, awkward, and painful.

Hollywood Ending is Allen's most self-conscious film (realizing that this is a contention made with each new Allen production, and one that holds as much resonance now as declaring that the latest Chris Columbus film is his worst ever), but more than being grotesquely self-absorbed, Hollywood Ending is one of those horrendous auto-critical apologias that intends to gently deflate criticism (last attempted to similar success by Todd Solondz with Storytelling) that succeeds only in appearing weedy and pathetic. Yet, because it's Allen, there are enough hilarious lines and trenchant moments in Hollywood Ending (my favourite is a "Who ordered?" in response to a string of invectives delivered in Mandarin) to preclude a complete nor too furious a condemnation: it elicits more of a merely resigned one. The sad truth of the situation is that we are at a point in American movies where the new De Niro release is greeted with hard-earned derision and the new Woody Allen with fatalistic indulgence. It's the annual visit from that self-pitying uncle who always wants you to sit on his lap. Originally published: May 3, 2002.