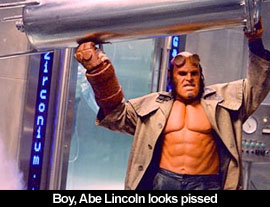 by Walter Chaw A bona fide auteur in an age of facile pretenders, Guillermo del Toro is the pulp genre's Martin Scorsese, his films filtering devout Catholic imagery through a lurid colour palette and obsessed with insectile machineries and mentor relationships between boys and old men. Del Toro's pictures are deeply personal explorations of faith, of redemption and resurrection--he made of Blade II a tale of the prodigal son, and now with Hellboy he's crafted a story of an evolving passion.

An adaptation of Mike Mignola's comic book series, Hellboy seems to be a contemporary Frank Miller dystopic gothic noir infused with surprisingly complimentary unguents of H.P. Lovecraft's Cthulhu Mythos (indeed, del Toro has been attached to an adaptation of Lovecraft's At the Mountains of Madness.) The idea of the big city falling into ruin and filthy with demons and elder gods is a fantastic metaphor for T.S. Eliot's London Bridges and rats' alleys, with the key difference between "The Waste Land" and del Toro's worlds the idea that there might be salvation in the grace of choice. His poet/narrators are outcasts for their existential divorce: pilgrims in search of individualism within faith distinguished from the masses for their jealous ambition. Retaliations against the strictures of true faith, then, del Toro's films betray a ferocious secular humanism informed by the pantheon of superstition, religion, and mythology--they're brass clockworks inhabited by ancient parasites, insects disguised as monks, vampires, haunted orphanages, and now a demon raised in a good home by a loving father, resisting his nature in order to combat the forces of darkness.

Hellboy begins at the end of WWII as the Nazis, led by Rasputin (Karel Roden)--yes, that Rasputin--and Hitler's favourite assassin, Kroenen, open a portal into elsewhere, ushering in a shift in the tides of war now and the apocalypse eventually. The allies are nostalgically on the ball, however, and close the portal--but not before something gets through in the form of Hellboy (played as an adult by Ron Perlman). Sixty years later, raised under the kind auspices of Prof. Bruttenholm (John Hurt) and a splinter agency involved in suppressing paranormal incursions, Hellboy, aquatic empath Abe Sapien (Doug Jones, voiced by David Hyde Pierce), and firestarter Liz (Selma Blair) seek to thwart Rasputin and Kroenen again in their quest to end the world.

Though the picture's production design (by Stephen Scott), special make-up effects (courtesy of Rick Baker's studio), and cinematography (by long-time del Toro collaborator Guillermo Navarro) are all beyond reproach, the moment in which del Toro shoots a marble crucifix soaked in a baptismal flood of rainwater (heralding Hellboy's "birth"), as well as a pivotal crucifix brand that decides whether Hellboy's destiny is to rule in Hell or serve in Newark, are what truly resonates. A romance between the gargoyle and the beauty finds its centerpiece in a scene that reminds of both the blue collar pigeon house epiphanies of On the Waterfront and Perlman's own television show "Beauty and the Beast"; a climactic kiss swathed in blue fire is romantic in the way that only something fresh can be. What works about Hellboy is that feeling of freshness--the courage to have as the hero a giant red devil and, more importantly, del Toro's steadfast insistence to cast Perlman in the lead.

What doesn't work is the same thing that afflicts Bryan Singer's X-Men movies: too many introductions, too shaky a definition of powers for good and bad, plus repetitive enough fight sequences that the audience starts looking forward to the moments in-between. (When the protagonist appears to be invulnerable, his skirmishes are just loud filler.) Weaknesses aside, Hellboy is endlessly watchable for the neophyte and endlessly fascinating for the student. That rarity, the intensely personal blockbuster, the picture fits comfortably within del Toro's oeuvre, finding the gothic rhythm that fuels the most interesting aspects of Catholicism and presenting it in a context that's stomachable for folks not bleating along with the flock. The most dedicated shrine to the delicate elegance of deformity since Hellraiser's cenobites, Hellboy isn't a perfect film by any means (its greatest crime, perhaps, that its ostensible action scenes tend to feel the most lifeless), but it's beautifully grotesque and fitfully brilliant. One part fierce, one part vulnerable: like the director, like his heroes. Originally published: April 2, 2004.