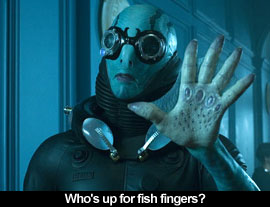 by Walter Chaw It's at the forefront of one's mind during Hellboy II: The Golden Army (hereafter Hellboy II), Guillermo Del Toro's brilliant dance along an ephemeral tightrope between pop and Puccini, that David Cronenberg and Howard Shore recently converted their remake of The Fly into a full-fledged opera: I can see the same thing happening with a lot of Del Toro's pictures. The director's said that after his Pan's Labyrinth "something popped" in regards to his restraint in allowing the menagerie of monsters in his brain free rein over his imagination--and that he endeavoured to bring all the madness of Mike Mignola's "Hellboy" universe to the big screen with or without a commensurately giant budget. (Of Summer '08's blockbusters, Hellboy II, costing around 85 million dollars, might be the most frugal.) The result is a film so crammed to the gills with invention that a bit of background business in a scene set at a bazaar hidden beneath the Brooklyn Bridge (this is the second great genre film this year after Cloverfield to make a pit stop at that particular locale) wherein a creature plays a pipe made out of a tanned human corpse is left uncommented-upon and is somehow ultimately unremarkable. The wonders of Hellboy II as experienced through our avatars Hellboy (Ron Perlman), Liz (Selma Blair), and Abe (Doug Jones, this time vocalizing the character as well)--team members for a covert government agency that deals with supernatural intrusions--are the way the world is, and it's fascinatingly left for the normals in the audience to crane for a better look.

But it's that separation of the mundane from the divine that marks the best of comic art--this wondrous, Nietzschian idea that existence is predicated on the possibility that we pass unnoticed, lest we become the gods asked to dispel ourselves. In Brad Bird's The Incredibles (and, to a lesser extent, his The Iron Giant), the question of tolerance in the "super"-verse is broached as a parallel to the difficulties in making a living (ditto: Raimi's Spider-Man films). Find in Del Toro's film the idea, too, that what's most threatened by being incredible is the possibility of sharing in the American Dream. The key moment in a picture most likely defined by its volume is the quiet, private commiseration of two friends as they listen to bad music, drink bad hooch, and cry over their girlfriends. Hellboy II is shot through with a vein of melancholia, a sense of things that pass, never to return, like an opportunity to tell a loved one you love them for the last time. Charting that grey area between supremely silly and surprisingly poignant is a devilishly dangerous thing to attempt; I wonder if Del Toro isn't one of the few directors now able to do that consistently.

Hellboy, discovered in WWII and raised as a human by his adoptive father (John Hurt), is a demon initially sent to Earth to catalyze the Apocalypse--an Apocalypse desired by Elvish Prince Nuada (Luke Goss), who returns from a centuries-long exile to take command of the titular clockwork Golden Army. His early proclamation that his goal is to remind humans of what it is to fear the dark is an essential, archetypical thing along the lines of Yeats's sylvan mythology, with us as the lost children in mortal peril of forgetting from whence we spawned and that which we believe to have dispelled with the light of reason and science. It's not a religious picture, it's a proto-religious picture. As one of the arch-baddies is revealed to be a green earth elemental, the death of whom announces the extinction of something wild and savage, Hellboy II shows itself to be a terminus film about this moment in time when humans find themselves struggling with the responsibility of their stewardship of the planet. In its way, the picture is Del Toro's manifestation of John Milton's "Hymn on the Morning of Christ's Nativity": a parade of pagan gods marching to their annihilation before the obliterating intolerance of Christian faith, seen here as a truce signed by creatures who have it in their nature to honour it even though it means their banishment to sewers and deep forests. The warning embedded in the picture is that the beings we elevate as saviours are the same ones who will eventually be responsible for the end of times. It sounds familiar. It ought to.

The film itself is lovely, a breathless feast of fantasy anchored by an authentic humanism. It's the product of a director in complete command of his medium and its ability to transmit the contents of his subconscious. Del Toro articulates the ineffable. A late appearance by death, its wings rimmed with eyes, its teeth impossibly smooth and white, speaks to the idea that the picture is about ultimate questions and the indelible importance of small moments. When Abe's immortal beloved Princess Luala (Anna Walton), sister of the fiend, reads from Alfred Lord Tennyson's "In Memoriam", the part she reads isn't the part most are familiar with--but if you know of the piece, you know there's a part that speaks to it being better to have loved and lost than never to have loved at all. Hellboy II is more than spectacle, though it is magnificent spectacle--more than pop art dissertation, though it's that, too. Hellboy II is a film entirely of this time that speaks in timeless images of Catholic grotesquerie and pre-Christian iconography, alive in the fire of invention and flights of fancy. It's not Del Toro's masterpiece (that distinction remains Pan's Labyrinth's), but it is further example of a distinct artist white-knuckling the crest of his genius and, for a while at least, focusing it into these fine, animate points of lush colour and sentient light. Originally published: July 11, 2008.