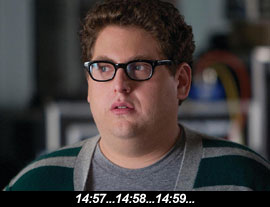 by Walter Chaw I liked the first hour of Judd Apatow's Funny People quite a lot--the last four not so much. Needless to say, focus and pacing are a problem. Focus and pacing are a problem for just about any film that runs two-and-a-half hours. It starts as something different and strange, an experiment that seems to be working whereby Adam Sandler's sociopathic persona is put under the microscope and left to squirm. And then it turns into a James L. Brooks melodrama, and then a Kevin Smith joint. (Its epilogue, taking place in a deli between two protagonists after the storm, is shot in exactly the same way as Brooks's conclusion to Broadcast News, while a late-film kiddie rendition of "Memory" from "Cats" exhumes musty memories of Jersey Girl's Sondheim desecration.) What I'm saying is that Funny People starts as Punch-Drunk Love, transmogrifies into Spanglish, and metastasizes into Jersey Girl. If this were a boxing match between film and audience, the rope's the only thing holding us up for the last six rounds. It would be wrong to say that I hated Funny People; it squanders so much potential that it's closer to the truth to say the overwhelming feeling it engenders is one of intense disappointment.

Neither is that a particular surprise, as Apatow (and Apatow™) pictures demonstrate in macrocosm the same diminishing returns, from the surprise and delight of something like The 40 Year Old Virgin to the more problematic ultraconservatism of Knocked Up to this, only his third turn at bat, and already the situations are overwhelmed by fear of controversy despite a high volume of cunnilingus and cock-size jokes. More obvious this time out are Apatow's limitations as a director: there are as many push-ins and pull-outs in Funny People as in a Michael Bay film, if the cumulative effect is obviously less bombastic. (For an artist so dependent on his writing and casts, that sort of dramatic crutch is all the more grating and unnecessary.) Funny People loses its way after that first hour--in the parlance of its stand-up comedian characters, it runs out of material and dies a painful death in the spotlight.

George Simmons is Adam Sandler, and he's just found out he has a rare blood disease that will invariably prove fatal unless he finds himself among the 8% an experimental Canadian drug has proved effective in curing. No fair guessing his outcome. Because he's been diagnosed, too, with the narrative lubricant of a "rough road ahead," George decides to hire a lackey to help him fetch Diet Cokes and write the occasional joke. Said toady is Ira (Seth Rogen), who, because it's quirky, lives with two friends--also struggling comics--and, because it's expected, is in love with mordant stand-up Daisy, played by the Linda Cardellini-esque Aubrey Plaza. Evidently, like Tim Burton and Alfred Hitchcock before him, Apatow has a type, and that type is completely different from his wife, hottie Leslie Mann. George himself carries a torch for old flame Laura (Mann), who is currently married with two kids (played by Mann and Apatow's two kids) to Aussie caricature Clark (Eric Bana). What this means is, were you to go there in your head, freak/geek godhead Apatow has just cast himself as Eric Bana. Anyway, the first part of the film is about George dealing with fame and mortality and Ira discovering the essential emptiness of immense wealth and notoriety without the love of a good woman. When the dust clears well into the film's third hour (though to be fair, it only feels like two days), everyone learns a good, hearty lesson about friendship and fidelity. It's incidentally the same lesson we've learned at the end of every single Apatow production. Couple that with the fact that we've heard variations on all the jokes, too, and of course the last time anyone attempted anything like this was Punchline, a sequel to or remake of which no one in their right mind was eagerly awaiting.

The part that's good, the first part, has Simmons revealing himself to be a shallow, disturbed, unjustifiably successful guy who has systematically alienated every person in his life to the degree that he has to hire a friend with whom to spend the last days of his life. The second part is about Simmons slowly learning through his brush with mortality that you should be nicer to people and that love is a many-splendoured thing not to be taken for granted. We learn that Apatow is an unrepentant moralist and the kind of incurable romantic you want to slap in the face. This means that nothing unexpected or risqué will happen despite a wealth of unexpected and risqué patter--which doesn't mean there aren't hearty laughs to be had, but they tend to be enhanced by the absolute deadness of the rest of it. Funny People reaches its climax when George and Ira respond to more bad news by mocking the messenger (after that, the picture only ever earns another bit of grace when it makes possibly the most inappropriate reference to The Deer Hunter in history)--the exact moment, as it happens, the film finally plummets off its balance beam and becomes a mawkish spectacle of self-love and over-reaching. It's a degree of smugness that hasn't infected Apatow's pictures in the past, though it is the hallmark of Sandler's. In their collaboration, one finds explication for countless scenes spooled from Simmons's idiotic (and successful) comedies as Apatow sets himself somehow above it all with his own puerile monuments to the nuclear family. Yes, a movie about a talking baby with Sandler's face is ridiculous--but no more so than Apatow giving his own little girl the moral of the story as she summarizes George's character arc in one piping, carefully-drilled recitation. Funny People is a movie about freaks and geeks written by a famous millionaire married to Leslie Mann; is it any wonder that it loses its way? Originally published: July 31, 2009.