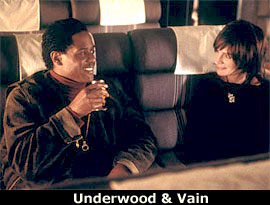 by Walter Chaw An experiment in perceptual distortion that questions the nature of viewership and the law of observation that states, in part, that the nature of the process of observation necessitates a change in the essential quality of the observed, Steven Soderbergh's Full Frontal is a hyper-pretentious film-within-a-film-within-a-film conceit so gimmicky it hardly matters that by the end gimmickry is its point. The picture begins with the opening of a fictional film called "Rendezvous" starring Calvin (Blair Underwood) and Francesca (Julia Roberts), written by Carl (David Hyde Pierce) and produced by Gus (David Duchovny), and as this "fake" film proceeds in perfectly acceptable 35mm, it is interrupted by long stretches of extremely grainy digital-video footage that purports to represent "reality."

In that "reality," the writer Carl is having trouble with his icy bitch of a wife Lee (ice queen Catherine Keener, much better in a surprisingly similar role in Lovely and Amazing), Calvin and Francesca are being directed in the "fake" film by David Fincher (as is Brad Pitt), and Gus has a much-publicized encounter with Lee's masseuse sister, Linda (Mary McCormack), herself due for a cyber-date encounter with arty community theatre director Arty (Enrico Colantoni). Meanwhile, Soderbergh breaks the fifth wall (or the fourth wall twice, or whatever) by making a cameo, the duration of which he spends with a black box covering his face. All of these characters (but not Soderbergh, who is, of course, directing "reality") are set to meet on the rooftop of some chichi hotel to celebrate producer Gus's birthday, but unlikely and untragic tragedy strikes, a dog eats a batch of hashish brownies, and the unquiet ghost of The Anniversary Party is first raised, then mourned.

There's a ridiculous bit of faux-doubling in the destruction of a pair of red envelopes, terrible performances punctuated by oodles of obvious improvisation, and even time made for a storyline involving a theatre piece that posits Hitler (Nicky Katt) as a Type-A executive type (and pain in the ass actor). The play--called, hardy har har, "The Sound and the Fuhrer"--appears to also have been written by Carl the writer. With so many plates in the air, he shouldn't really be so sad about losing his job at L.A. MAGAZINE, where the flaccid riposte seems to involve endless Brad Pitt covers.

Full Frontal has an idea about what it wants to be, I suspect, but no real idea of what it wants to do to get there, for some reason secure in the knowledge that since Roberts, Pitt, Duchovny, Pierce, and Terence Stamp (still playing the stiff he played in My Wife is an Actress) are so intimately familiar with the life and times of self-obsessed artist-types that all one need do is point the camera to get a withering reality-bending satire. It has a great many coffee shop-deep things to say about the creative process and it appears to desire to connect that process with greater issues like love and identity, but the ways it chooses to address these existential quandaries are sophomoric and melodramatic in equal measure. It's plodding and it's hollow, an experiment that crosses a line between courageous and ostentatious in an essentially unforgivable way that Soderbergh's own reality-testing sex, lies, and videotape never did.

In the end, the difference may be that while the Soderbergh of sex, lies, and videotape was a hungry young filmmaker with something to say freed by the bonds of his miniscule budget, the Soderbergh of Full Frontal is a hot A-list commodity, bored and wanting to get a few of his other A-list pals together to "do something vital" to save their souls. Full Frontal is so claustrophobically masturbatory that it becomes something only an avowed art film crowd, fat on pseudo-intellectualism and a jovially misplaced sense of superiority, can possibly embrace. Mock-obscure--it sort of reminded me of animated critic Jay Sherman's student film--and unpleasantly puerile, Full Frontal's greatest sin is that at the end of all that (sometimes literal) huffing-and-puffing it attempts to deflect criticism by winking that maybe, just maybe, it's supposed to be this bad. A statement on the ultimate banal inconsequence of these celluloid illusions we take as a kind of lunar sustenance, perhaps, and perhaps expanded to include how we use movies to shore against all the perceptual lies that comprise our lives.

Right. So tell me something I didn't know. Originally published: August 2, 2002.