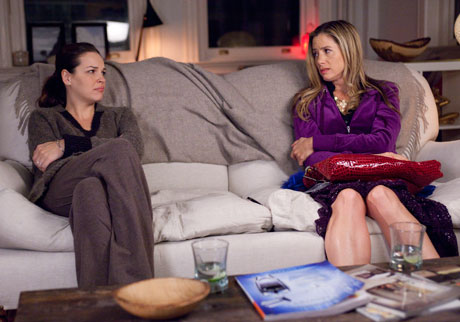 by Angelo Muredda Following the boys-only slate of the Cannes Film Festival, which made room for tepidly-received efforts from the likes of Andrew Dominik and Lee Daniels but shut out women in a comparable phase of their careers, June has been a surprisingly fruitful month for female directors of North American independents. Not that it's compensation for that snub, but it's heartening to see Lynn Shelton's Your Sister's Sister and Sarah Polley's Take This Waltz get the lion's share of positive indie press in recent weeks, putting them in good company with Wes Anderson, whose Moonrise Kingdom did make Cannes's official selection. You could think of the Female Eye Film Festival, now entering its tenth year and running through June 24th at Toronto's Carlton Cinemas, as a low-key companion to those higher-profile releases.

The fest is something of an international sampler platter of feature films, documentaries, and shorts directed by and focused on women. Bookending its 5-day festivities are opening-night film Billy Bishop Goes to War, FeFF Honorary Director Barbara Willis-Sweete's crack at John MacLachlan Gray and Eric Peterson's slice of Canadiana, and festival closer Union Square, a Mira Sorvino starrer from former Sundance Grand Jury prize-winner Nancy Savoca. Both had their world premieres at TIFF 2011, but FeFF is a good chance to catch up for those who missed them, and Savoca will also be in town for a talk on the 23rd.

Among the other dramatic features is a pair of genre films. Tuyet Le's Patient 17, a thriller about a pair of medical interns trying to crack the mysteries of the titular patient with multiple-personality disorder, overdoes it early and often with its "CSI" filters and quick cuts, though it's engaging enough as a dramatization of mental illness and boasts a nice performance from Cornelius Macarthy, who might be vaguely familiar from his host of bit parts on British TV. Desiree Lim's The House is a much more curious and less successful stab at psychological horror, despite the gorgeous Vancouver home in which it's set--a chrome-brushed, glass-panelled mansion as imposing as Julianne Moore and Liam Neeson's unreal palace from Chloe. Its limited scares, however, don't justify the 110-minute running time, the puzzling digressions about post-9/11 trauma, or the acoustic guitar-strumming ghosts in bathtubs.

Things are stronger on the documentary side of the programme. Eliaichi Kimaro's A Lot Like You is a moving account of the filmmaker's effort to reconcile her present life in the U.S. with her Tanzanian heritage. Although Mariam Demian and Andrea Gilbert's short Children of Who? is significantly rougher around the edges and vague on the ideological positions of its talking heads, it's still sobering as an essay on the Cambodian orphan crisis, where boys, as one expert from UNICEF puts it, are treated as gold and girls as thread. Most appealing for those with an interest in the arts is Treasures from the Rubble, Alexandra Branyon's profile of Alabama folk artist Lois Wilson. Putting aside the overly literal posthumous voiceover from an actress voicing Wilson, it's a lively portrait of a forgotten artist for whom grocery bags were a fitting canvas, and shoe polish as good as any paintbrush--the kind of character you hope to unearth at an outsider festival like FeFF.