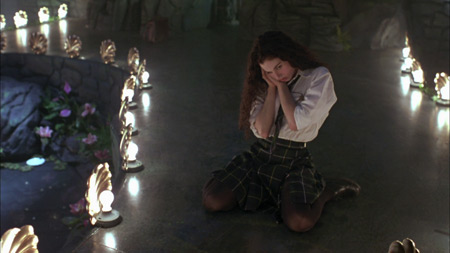 by Bryant Frazer When Exotica debuted at Cannes in 1994, Atom Egoyan had already earned a reputation for curious, low-key explorations of memory and alienation. His Family Viewing, Speaking Parts, and The Adjuster leaned on video as a kind of metaphor showing how relationships become dependent on individual frames of reference that each move in only one direction--how one person's blank tape is another's cherished memory, or how one person's pornographic display is another's lifeline. Exotica represented Egoyan's commercial breakthrough in part because he found an enticing venue for those observations. It's one of the most fundamentally despairing movies that I know, and yet there is in the precision of its craft, the bravery of its conception, and the depth of its empathy something fundamentally uplifting.

It helps that, although the relationships at its centre are deeply, deeply fucked-up in ways that have to do with the conflation of sex and death, Egoyan finds room for a playful side story involving Thomas (Don McKellar), a small-time smuggler of rare birds who takes up the ballet as a hobby upon discovering therein a foolproof way to meet cute boys. The film's title is in part a reference to the fragile eggs, taped close to his belly, that Thomas smuggles through Canada Customs in the opening scene. (It might also describe his taste in men.)

But Exotica is most obviously named for the lush, fictitious Toronto strip club where the film's real action takes place. The manner in which characters behave inside Exotica raises questions about what brought them there in the first place. There's Francis (Bruce Greenwood), the bearded professorial type who spends evenings glowering miserably, as if the next table dance is the only thing that will save his soul. There's Zoe (Arsinee Khanjian), the benign earth-mother type, bulging with child, who apparently runs the place. Perhaps most provocatively, there's Eric (Elias Koteas), the chiselled club DJ, who introduces the acts in the dulcet, faux-seductive tones of a depressed FM radio DJ, his open contempt for his own sexy-girls shtick registering in nearly every syllable that escapes his lips. "What is it that gives a schoolgirl her special innocence?" he murmurs into the mike. "Her sweet fragrance, fresh flowers light as a spring rain?" As you ponder the question, Christine (a 19-year-old Mia Kirshner) steps out on stage in white shirt, tie, black stockings, and tartan skirt and starts performing a sad, mechanical dance to Leonard Cohen's "Everybody Knows." (Hilariously, this is cued in the Blu-ray subtitles as "Lively Music.")

As Christine hitches up her skirt and starts swinging her hips to and fro, it's hard not to be simultaneously titillated by her confident, choreographed moves, conflicted by Eric's ersatz pedophilia, and mystified by Francis's Gloomy Gus routine. Watching it, you become acutely aware of your own status as spectator. What, exactly, is the intended sensation? Arousal? Disapproval? Sympathy? Disgust? At some point, your brow starts to furrow. What has gone wrong with these people? 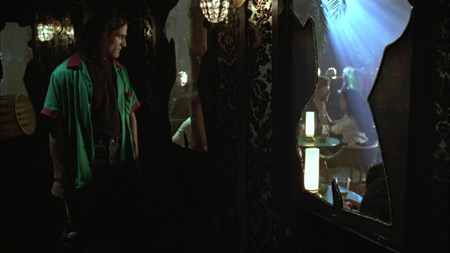 Spectatorship, if not outright voyeurism, is rife in Exotica. From the seashell stage-light fixtures and Playboy-grotto production design to the generally murky green atmosphere, Exotica has the same visual quality as the untended fish tanks in the pet shop that fronts for Thomas's lucrative side business. As it happens, Francis is a tax inspector for Revenue Canada assigned to audit Thomas's books--an officiousness that clashes with his fragile demeanour at Exotica. (Thomas, who seems confident in his own sexuality despite a somewhat nebbishy appearance, is in many ways an inverted double of Francis.) Exotica itself is much like one of Thomas's fish tanks, in the sense that it easily facilitates our observation of the fascinating little beasties inside. There are multiple levels of spectatorship within Exotica, however: DJ Eric glares down from his crow's-nest perch at the spectacle below; conspicuously-pregnant Zoe peers out at her dancers through a hallway lined with one-way mirrors; Francis watches, mesmerized, as Christine sways within arm's reach.

You can look, but you can't touch. That is the social contract that allows the strip club to function. (It's also, incidentally, a fundamental limitation that faces cinema audiences.) When Francis is ejected from Exotica--expelled from his tawdry paradise--for laying a perfunctory paw on Christine's belly, it at first looks like Eric is being unnecessarily cruel. Eventually, we realize that Eric has staged an intervention: No matter how enticing the environment inside Exotica, a lurid, vaguely incestuous fantasy life will never restore Francis's mental health. There are demons to be confronted, and as Francis's lone-wolf façade finally cracks, Exotica makes it clear that some pain deserves to be shared.

Egoyan orchestrates the intricate spectacle using a flashback structure that reveals layers of meaning slowly, as the movie progresses. To that end, Exotica employs one of my favourite edits in all of film. About 15 minutes in, we're watching Christine from Eric's point-of-view in the dark environs of Exotica itself, as she sucks, mock-innocently, on the tip of a cocktail straw. The noisy, bass-heavy sound design characterizing the club falls away, replaced by a single, synthesized chord. Suddenly, cut, and we're looking out across a field of golden-green grass as a line of people becomes visible just over the horizon, moving purposefully towards the camera. A simple piano motif begins to play. The effect isn't so dramatic on a TV set, but on a big screen, it's unforgettable; the picture is suddenly so bright you have to squint. And who are those walkers, anyway? I always thought this image had the whiff of the afterlife about it, and it's significant that this is the visual thread that will introduce death to the world of Exotica. 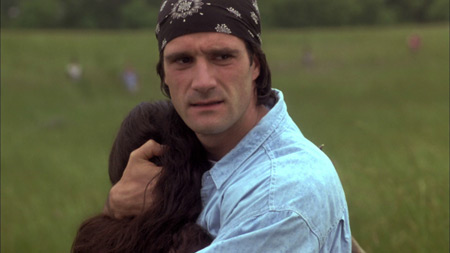 I hope I haven't given the impression that Exotica is merely a high-toned adventure in miserabilism. It's well-acted, finely scored, and immensely intriguing. It's occasionally very funny and even genuinely sexy--Egoyan is too honest about human nature to completely discount a place like Exotica, though he's too savvy about same not to question the motives of everyone involved. And his sometimes-elliptical style can be playful, too. When Francis drops young Tracey (Sarah Polley) off near a dicey-looking strip mall, handing her a $20 before she gets out of the car, we're obviously invited to imagine the worst. It will take a few more iterations of their conversation before we suss out what's really going on, and what specific role she plays in Francis's private theatre of unhappiness.

Too, despite a hefty payload of human misery that amazingly increases in scope as Exotica edges through its final, heartbreaking minutes, it's one of the most optimistic movies I know. It's fearless in its psychology, giving Francis a mix of paternal grief and queasy desire that only seems comprehensible when framed by the film's surpassing humanity. In its insistence that ordinary, decent human beings can be pushed by circumstance into toxic behaviour, and that it will take other ordinary, decent human beings to rescue them from that downward spiral, Exotica finds a moral imperative in the apparently inconsolable sadness of others. 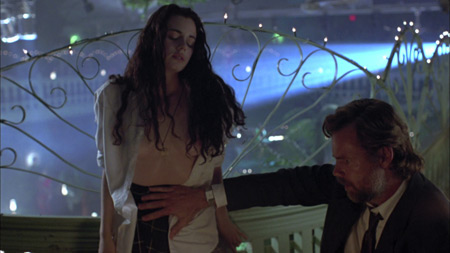 THE BLU-RAY DISC
Seeing Exotica at home has generally meant watching the non-anamorphic widescreen DVD issued by Miramax way back in 1999. That disc wasn't terrible, exactly, but it suffers badly in comparison to the new release from Canadian distributor Alliance. The revelation here is the colour timing, which keys the film's overall colour scheme to a unified palette heavy on greens and purples, rather than the super-cool late-1980s blue where the DVD lived. Flesh tones are notably warmer here, and the image has been brightened considerably, vastly improving the readability of scenes set inside Exotica. Judging from the severely clipped highlights in a few shots, I might argue that the new transfer was brightened too much, but there is no question that it's a much better overall reflection of DP Paul Sarossy's work. As a bonus, more information is now visible on both sides and at the bottom of the image, framed at an HDTV-precise 1.78:1.

I'm less happy with the overall level of picture detail. The image remains a little soft throughout, and it's hard to tell whether that's a characteristic of the film as shot, an artifact of the source materials used, or a remnant of noise reduction. (The average bit rate is 24.6 Mbps, which does not match, say, Criterion standards, but does easily fit the movie on a single layer.) Contrast-wise, this transfer appears to be especially generous in the midrange, with a lot of detail pulled out that might otherwise disappear into the shadows. A degree of grain is visible throughout (especially in low-light scenes, where the relative brightness of the transfer highlights it), but not at distracting levels; it may have been digitally muted. An occasional wobble suggests an uncorrected glitch in the source print. While it's an adequate presentation, I could easily see a studio with some money to splash around creating a richer, more impressive version--or mucking it up entirely by reverting to the blue-on-blue palette favoured by Miramax.

Listening options are English and French 2.0 DTS-HD MA; de-matrixing the original English-language track yields a surprisingly aggressive surround soundfield with lots of space for the music and ambient sound effects to spread out. Overall fidelity isn't stellar--dialogue can sound a tad muffled, especially when there's a lot going on in the mix--but I assume it accurately reflects the source material. Although a head-to-head comparison reveals that the DVD may be just a touch brighter, the spaciousness of the lossless audio absolutely clobbers the compressed Dolby Digital, particularly where Mychael Danna's ethereal score is concerned.

Extras begin and end with the third audio track on this disc, a feature-length commentary by Egoyan and Danna. The decision to pair the composer with the director is not a bad one--certainly, the ensuing discussion has a different flavour from your usual yakker, with special attention lavished on the (excellent) music choices. Though I'd love to hear what some of the actors have to say about their performances, people like Kirshner, Koteas, and especially Bruce "Captain Pike" Greenberg are obviously in very different places in their careers now. Danna does prod Egoyan, repeatedly, to explain what he was thinking about some aspect or other of the production. (If you ever wondered why there were parrots in so many different places in Exotica, well, now you'll know.) At one point, Danna says he wishes he could still write scores as good as Exotica's and Egoyan responds by saying he wonders why he can no longer make movies as good as Exotica. Insert your own Chloe joke here, har har, but that exchange is a nice example of the candid shoptalk vibe.