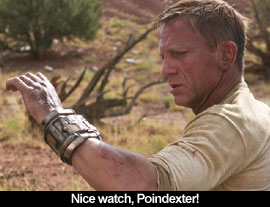 by Walter Chaw Let's be clear: if there were a Hippocratic oath for movies, and there should be, it would be "first, do not suck." It's not about any desire for depth in something called Cowboys & Aliens, but rather the hope that the movie achieves some kind of baseline competence without, along the way, tripping off issues it doesn't have the muscle to address and therefore shouldn't also try to ride to an illusion of depth. It's the difference between Brett Ratner using the Holocaust as a plot point in X-Men: The Last Stand and Matthew Vaughn doing the same in X-Men: First Class; I mean, talk about it or not, but if you bring it up, have something to say. So when Cowboys & Aliens director Jon Favreau casts Adam Beach as the adopted--and hated--black-headed stepchild of racist cattle baron Dolarhyde (Harrison Ford, gruffing it up in a role named after the serial killer in Red Dragon), he needs to do better than offer up a noble Redskin who, with his last martyred breath, all but invites his would-be dad to go be white with his real boy, Dolarhyde's psychotic son Percy (Paul Dano). It's the message of the film, sort of, where no message was necessary or even welcome--this transformation of Dolarhyde from a rawhide-chewing bastard into a dewy-eyed, dyed-in-the-wool liberal who lowers himself to rescue the chief savage (Raoul Trujillo) after taking a second to complain about the disconnectedness of Yankee leadership in the Union army. It's enough to root for the South to rise again.

The aliens of the title are more ridiculous, naked, animalistic monsters come to the 1870s West in search of the gold in them thar hills; despite having discovered the miracle of interstellar travel, they've yet to master seeing in the daytime or clothes. Described as "scouts" in an apparently popular trope nowadays (though I do have more hope for Battleship and its "scouts," if only because Peter Berg is directing that one), they're armed to the teeth and spend their spare time "ropin'" human locals for their gold knick-knacks and fillings, although this doesn't explain what it is they're doing to our Man Without a Name, Jake (Daniel Craig), who wakes up in the desert with a fancy bracelet and his memory wiped. The product of some grand plan from our alien spoilers? I wish. No, Cowboys & Aliens never really pays off anything it sets up, with Favreau packing a full hour of incidental, second-unit footage into the running time of people riding on horses to nowhere to do something they'll figure out once they get there. Yes, it's bad. Yes, it's boring.There's also Olivia Wilde as lovely-little-thing-with-a-secret Ella, who, for no explicable reason, brains Jake at one point, in direct conflict with the revelation later on and constantly that she believes Jake to be her only hope against the aliens. Yes, upon discovery of the last, best hope for survival, pistol-whip him almost to death. When we finally arrive at the climactic battle, there's no sense of geography or space, so that friendly Indians lining up along a ridgeline to shoot at baddies not harmed by bullets (until they are) may as well have been inserted in post-production along with the antagonists. (Luckily, the aliens seem to prefer hand-to-hand combat to simply blowing the primitives to bits with their drones and laser cannons, and frankly, none of this would matter if any of it were the least bit exciting.) There's a dog, an orphan, a drunk preacher (Clancy Brown, the best thing about this whole mess, so of course he dies fairly early on), and an exchange late in the belly of the stupidest alien spaceship since the one in Super 8 where Ella implores Jake--and the rest of us who were supposed to identify with this glowering cipher--to "stop thinking." Fair enough.

But if you were suddenly without thought, you'd still find in Cowboys & Aliens a collection of disconnected explosions and flat production design, with characters who declare things to each other in inhuman exchanges very much like the ones in Relativity Media's last fucking disaster that's worse than you already think it will be, Season of the Witch. You'd find Daniel Craig looking bored and confused with the rest of us, Ford at a complete loss and reduced to acting out reaction shots from his Indiana Jones catalogue while getting upstaged by the dog, and other amazing actors like Sam Rockwell, Keith Carradine, and Dano doing their best not to betray that they are, in fact, still thinking and, more specifically, thinking they need new agents. You'd notice that the aliens' technology appears to be, on the main, goop-based; that none of the good guys ever try to pick up any of the bad guys' superior weaponry (it's not thinking too much, it's the Tao of "Halo"); and that no amount of changing film stocks during limp flashbacks makes them useful or interesting. Cowboys & Aliens is this year's Van Helsing. At least it's not in 3-D. Originally published: July 29, 2011.