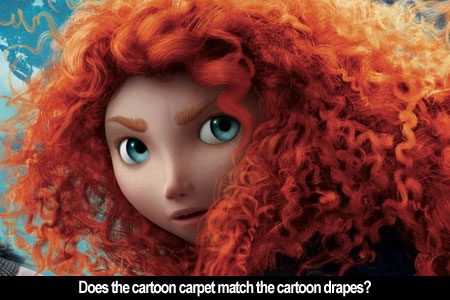 by Walter Chaw Brave...isn't. Not very. It's by far the most conventional Pixar film, and while it's better than either Cars, that's only because the Cars movies are simply awful. Brave has a plucky girl heroine who disobeys her mother, makes a hash of things, then solves everything at the end through the murder of the antagonist. It has an adorable animal sidekick (three of them, actually), treats an entire culture like a broad ethnic joke, and misses every single opportunity to be about something. Huzzah! When we say as a culture that something's for children, we mean that it's better--unless we're talking about media culture. Brave is for children, and its only connection to things like WALL·E, Finding Nemo, Monsters Inc., The Incredibles, or Ratatouille is its company's pedigree, fading fast until Brad Bird or Andrew Stanton decides to strap 'em on and jump back in the ol' computer-animated saddle, riding to the rescue as the company founded on their beautiful complexities descends into absolute, uncontroversial, shallow mendacity.

Anyone who's ever seen a Disney movie could have written the script for this one--just swap out the culture, insert a couple of culturally-specific jokes and familiars, and there you have it: box-office gold, a fast food tie-in, and a naughty, adult-themed costume. Princess Merida (Kelly Macdonald) doesn't hold to tradition, so when her Ma (Emma Thompson) shoehorns her into a corset to be auctioned off to a neighbouring clan's inbred prince, Merida takes up her trusty Hunger Games bow and shows all the boys that a girl can shoot, too. Mortified, Ma and Merida have a throwdown, leading to Merida stumbling upon a Witch™ (Julie Walters) in the beautifully-rendered CGI forest from which she requests a magic cake that will change her Destiny™. The cake, instead, turns Ma into a bear, which, given that Ma's husband, the King (Billy Connolly), is obsessed with murdering bears, is not so great. This leads to a moment where Merida declares to her father that she will not allow him to kill her mother, which should have a ton of Pixar emotional weight and gravitas attached to it, but is instead like that piece of gristle in a hot dog. It's already bad; now it's worse. There's a time-limit to the curse (à la Beauty and the Beast, The Little Mermaid, etc), stuff about haggis and how stupid and bellicose are the Scots, a final battle, reconciliation between mother and child, and a Legend™ around which it all revolves like a monkey on a hurdy gurdy's chain.

Sure, Brave is beautiful--you can see every single frickin' wet hair on the bear's body when it's hunting for salmon--but it has no longevity. People will love it, yet it will be no one's favourite. It's empty and it would be offensive, too, if anyone were looking out for the Scots--and if you really want to dig into it for some reason, I'm sure you could also say something about the portrayal of women in traditional roles. There are precious few stakes throughout and the message at the end is seemingly that if you shake the tree, you'll get beaten down until you toe the line; that mother is the bad guy who desperately needs to loosen up and listen to her hormonal progeny, spiralling out of control; and that dad is funtime/boys will be boys. But who's digging? The only thing Brave inspires me to investigate is why a trio of art-department people, videogame designers, and the woman who directed that smash hit Prince of Egypt were entrusted with a project that looks and acts like one expensive missed opportunity. I'm telling you, as the father of a wonderful, quirky, strong, amazing little girl, I was breathless with anticipation over a Pixar film with a female protagonist. Imagine my disappointment when they gave me another Disney one.

Also, if you were asking: La Luna, the opening short about three generations of guys who clean the moon, is edgeless treacle--the animated-short version of Oscar-baiting.

You Know u are an idiot. While this wasn't great, the 2 Cars movies were among the best. It is so obvious that u aren't an American.