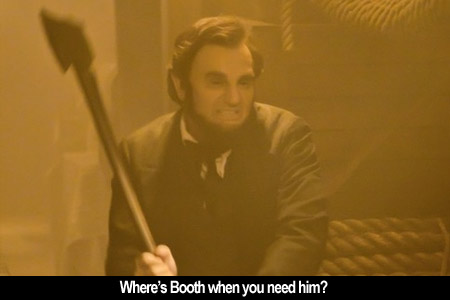 by Walter Chaw That idiot Timur Bekmambetov continues his reign of terror with Abraham Lincoln: Vampire Hunter, an adaptation of a Seth Grahame-Smith novel co-written by Grahame-Smith himself that tries to walk the Pride and Prejudice and Zombies line between reverence and camp but only manages to be ugly and stupid. Abe's (Benjamin Walker) superpower is honesty, natch--and a silver-coated axe. One night, as a child, after witnessing a vampire kill his mother but somehow not turn her into a vampire (vampires don't fear the sunlight in this one, either, or at least fear it only as much as Edgar Winter does), Abe embarks on a vengeance-crusade aided by vampire hunter-trainer Henry (Dominic Cooper). Henry has a secret! It doesn't matter. Nothing matters. Abraham Lincoln: Vampire Hunter inspires a sense of absolute despair and hopelessness in the viewer, as it's not just bad, it's misguided in every way a film can be misguided, from conception to execution. There's a horse-stampede fight, a burning bridge and a train, grotesque misuse of slow-motion and CGI, and nary a naked Angelina Jolie anywhere to leaven the stew. I want to muster up some outrage at the portrayal of Confederate soldiers as bloodsucking legions of the damned, but that actually strikes me as the least offensive of the film's myriad offenses.

By all appearances, Abe is a mild-mannered shopkeeper, wooing the hand of hotsy-totsy Mary Todd (Mary Elizabeth Winstead) and pissing off Mary's fiancé Stephen Douglas (Alan Tudyk, uncredited because he still wants a career after this), lending the seen-but-not-heard Lincoln-Douglas debates a little Twilight ribaldry. Delicious! Abe, as he's learning to be a lawyer, moonlights (haha, see what I did there? Moonlights) as a serial killer, emptying sleepy Springfield--without arousing any suspicions whatsoever--of bankers, pharmacists, and other hale citizens. We get cameos from Harriet Tubman and Jefferson Davis, since the confederate vampires, led by Adam (didn't-you-used-to-be Rufus Sewell), are using slavery as an endless source of food for the larded gentry. This is offensive to some group, but I frankly don't know which. Abe also has a black sidekick, Will (Anthony Mackie), who acts as his aide-de-camp because Abe one day consented to be whipped alongside him when white vampires stole Will's parents. This inspires in Abe a deep, abiding sense of fairness for all races, of course, leading to another mischaracterization of the Emancipation Proclamation and an epilogue that depends on the delivery of a sterling silver payload to Gettysburg. I'm not sure where Abe got time to write the Address he delivers on the back of an envelope, given that the train he's riding is filthy with the bloodsucking damned, but he's a superhero, don't you get it?

I like the bit about how vampires can't kill themselves, because the way that Bekmambetov illustrates it reminded me a little of how David Lynch visualized the force-field thingies in Dune. I also liked how Bekmambetov abandons this little thing during the final fight because, you know, who's listening anyhow? Abraham Lincoln: Vampire Hunter is awful. It's soul-sucking in the way that only movies this poorly-conceived can be soul-sucking: exhausted, exhausting, Wild Wild West all over again. It dangles its bizarre high-concept like an angler-fish lure, and the people who bite will likely bite because they want to make fun of it. I used to think there were movies that were so bad they were good--I'm coming around to the idea that those movies are just good and that these movies are just bad. Abraham Lincoln: Vampire Hunter is miserable stuff, like every other film Bekmambetov's ever made; like every film he's bound to make. He's Uwe Boll with a bankroll, meaning only that more people will see his movies, giving people with money the feeling that they should give him their money to make more movies that will make them money. His name above the credits is fair warning; shame on me for not heeding it.

I can't think of a movie less deserving of zero stars--not that it deserved four, mind you...well, maybe more like five? Or all the stars? A Civil War movie that actually has the stones to have absolutely zero sentiment regarding the Confederacy--no, "well the South were noble warriors too"--no, the Confederates were VAMPIRES WHO DRAINED THE BLOOD OF BLACK PEOPLE. Which is, you know, true. That alone makes it worthwhile. I mean, jeez, it's like the political inverse of Birth of A Nation.

And it succeeds because it takes its ridiculous premise and plays it straight. It's like a really great 70s horror comic. Try to do this stuff camp and it falls apart. Try to do this stuff Whedonesque and, okay, there's a fine line there that works for some and not for others. In AL:VH Lincoln really really did free the slaves from vampires and that is it--that is the story. I mean it doesn't have a lot of competition on this score, but as a "different" take on the Lincoln mythos? I loved it.