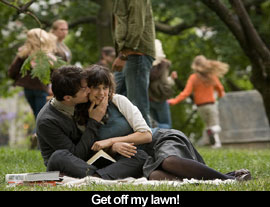 by Ian Pugh (500) Days of Summer is another entry in a bizarre trend of films expecting a medal and a cookie for recognizing romcom clichés and concluding that relationships are difficult (see also: He's Just Not That Into You, Whatever Works, the upcoming Paper Heart, and the narrative distractions from the raw emotional power of Harry Potter and the Half-Blood Prince), respectively, although there is, admittedly, some instinct that makes you want to play along with this one. You'd like nothing more than some assurance that the smug asshole hitting on the protag's girlfriend will get punched in the mouth--but attendant to that is a peculiar desire to see said asshole defy convention by rising up from the floor and slugging the guy right back. Each of these scenarios plays out in (500) Days of Summer: In an admirable attempt to strike at both the base of the spine and the depths of the brain, hopeless romanticism shares time with intellectual cynicism without ever pretending they can be truly reconciled in matters of romance. But grabbing your attention with this tactic is the film's idea of a trump card--and the apparent intention to dig a little deeper only results in uncovering the same old revelations imparted dozens of times before by much more eloquent voices. And then there's the question of who, in this day and age, needs to be reminded that the greeting-card industry is built on banal emotional shorthand.

That particular issue is brought to the fore by twentysomething Tom (Joseph Gordon-Levitt)--a wannabe architect writing cutesy missives for greeting-card consumption--picking apart his former relationship/current obsession with quirky receptionist Summer (Zooey Deschanel). He was a hopeless romantic, she was free-floating and non-committal; their relationship and its aftermath are told almost entirely in the past tense, without strict regard for the boundaries of linear chronology or even reality itself. It's a pale imitation of Annie Hall, in other words, complete with the unnecessary explanation that while there are plenty other fish in the sea, some fish you never get over. (500) Days of Summer comes hot on the heels of Woody's own Whatever Works--the coda to Manhattan nobody asked for--which makes you wonder if the old man, despite his increasing insularity, hasn't had his finger on the pulse of popular culture all along.

Indeed, (500) Days of Summer steals the younger Allen's penchant for reality-bending absurdism without any of his concern for context: true love is a high-falutin' Broadway number set to Hall & Oates, while post-break-up blues are a melancholy Bergman picture with profanity-laced subtitles. What this is supposed to say about the characters as individuals and how they feel about their situations, fuck if I know--but it sure is silly and ironic, ain't it? Perhaps silliness and irony could become the only ways in which one is capable of responding to complex feelings like infatuation and love, yet their presentation here is not deceptively simple because there's nothing deceptive about it. The film practically crafts a mission statement out of empty post-modern nostalgia, having no opinion or perspective on what it's referencing beyond the familiarity of the references themselves. Love is pleasure, love is pain, unrequited love hurts, and true love might be lurking around the corner. And?

It's symptomatic, I suppose, of the populist-indie paradox that professes disgust for mainstream values while encroaching on strictly formulaic, crowd-pleasing territory. Though a dry, coolly-sarcastic narrator declares at the very beginning of the film that this is not a "love story" (meaning not the uncritical, love-conquers-all pap Hollywood churns out several dozen times a year), (500) Days of Summer still surrounds itself with Meet Cutes and wacky trips to the art museum where neither party understands what the pieces are supposed to mean. But, uh, Tom's friends also play tabletop arcade games, so the characters are original enough, right? A lack of ambition also manifests itself in the casting of Deschanel, whose kaleidoscopic irises haven't quite had the desired effect on the characters she's been playing as of late, since her mere presence has become a lazy shorthand for "quirky muse." The film's claims that Summer is a free spirit are largely unsupported except by Deschanel's persona and a couple of uninspired idiosyncrasies.* (She loves The Smiths and Ringo is her favourite Beatle.) The movie itself seems ready to call Summer out on her shallowness by rocking her non-belief in commitment offscreen, but any growth on her part seems to exist solely for Tom's benefit, causing the whole smarmy thing to collapse in on itself. So the eccentricities are offensively easy to digest, and the emotional crises feel orchestrated to make us nod in agreement; whatever its aspirations, it's a sugary loaf of romantic-comedy nonsense only marginally more meaningful than the greeting cards it goes out of its way to disparage. I guess the fact that Tom first seeks advice from his sage ten-year-old sister (Chloe Moretz) should have tipped us off. Originally published: July 17, 2009.

*Deschanel's role in Yes Man is pretty much identical to her role in this one--and, really, how much more middlebrow can you get than Yes Man? (What I wouldn't give to see her in another mad, unpredictable piece of work like The Happening.)