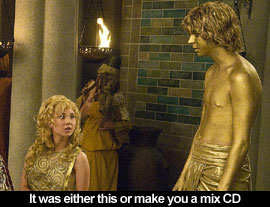 by Ian Pugh Maintaining relevance is a bitch, ain't it? Just ask Harold Ramis. His sequel Analyze That marked the point at which Robert De Niro lost his self-parody cred; seven decades' worth of film noir had beaten him to the punch at everything he had to say in The Ice Harvest; and the ball is only now starting to roll on that third Ghostbusters movie that's been unwarranted for the better part of fifteen years besides. But, having found a friend in Judd Apatow, Ramis finally has the means of making a movie for the here and now and gathering together an ensemble cast composed of all those funny guys the kids seem to like these days. Unfortunately, with cinematic trends as fickle as they are, most of these ultra-popular comedians already passed their expiration dates a minimum of two years ago--and, to the surprise of absolutely no one, Year One ends up being another rotten egg in what is thus far the weakest summer for movies in recent memory. As cavemen, Jack Black is still the wild-eyed idiot and Michael Cera still the stuttering virgin; Forrest Gump'ing their way through the Old Testament, they cross paths with Cain (David Cross) and Abel (Paul Rudd) as well as that other famous pair, Abraham (Hank Azaria) and Isaac (Christopher Mintz-Plasse, reprising McLovin as anticipated). Rest assured that, if the film really wanted to jump around the Book of Genesis, it probably would have featured Jonah Hill as Esau and Will Ferrell as Jacob, doing whatever it is they do anymore without deviating from what you know about them. You pays your money and gets what you expects, and that's precisely what's so deadly about Year One.

I mean, it's not like the premise doesn't have potential: When the cavepeople find themselves sold into slavery at the hands of more advanced cultures, Year One has a plum opportunity to deflate the self-seriousness of ancient epics like Apocalypto and 10,000 BC. (Was there ever a movie moment riper for parody than a caveman saving the world by chucking his spear into an Egyptian Fu Manchu?) The whole thing looked terrible from the get-go, but I have to admit I held out some hope that the premise was going to be just silly and out-there enough to betray a sense of self-awareness with regards to the casting of one-note comics so clearly out of their element. Ramis, alas, prefers to put himself in the awkward company of Disaster Movie by ignoring the world's most inviting targets in favour of toilet humour that could be told in any setting, at any time, without any context necessary. A scene that sees Black eating bear shit has nothing to do with prehistoric rituals/mores and pretty much everything to do with Jack Black eating bear shit; meanwhile, Cera is forced to give Oliver Platt (playing an evil high priest--evil less for any overarching scheme than because he's an icky homosexual) an oily, hairy rubdown and, later, pees all over himself. Nope, no self-regard there, at least on their end--the moviegoing public will perhaps take this film with that other recent, urine-soaked nadir of American comedy, Land of the Lost, as final confirmation that this shit needs to change, and fast.

The unpopped kernel of interest here lies in an interpretation of Biblical stories where God isn't much of a presence at all--which, consequently, includes a hedonistic Sodom (where the majority of the action takes place) that isn't engulfed by supernatural flames*. Sadly, that concept is pretty roundly defeated by so much oppressive scatological nonsense. It would be reasonably interesting, I suppose, to rewrite Abraham as a homicidal nutjob with a fetish for circumcision if the film didn't see him as a mere opportunity to crack a heap of identical jokes about "chopping off the end of your dick." That's not going to stop Year One from reaching past its self-imposed station, though, no sir. With Black's character anointed as a "Chosen One" of sorts for reasons too tiresome to recount, the film comes to fancy itself as a Life of Brian-esque satire of Christian tropes and religious fervour in general, climaxing with the standard plea for individualism that notably goes without the ironic bleat back from the congregation that would lend weight to the idea. So, hey--back to the piss and shit.

What earns Year One that half-star is David Cross's Cain, who, after taking a rock to his brother, protests his innocence and double-crosses his comrades with the kind of desperation you would expect in a more intelligent comedy of this nature. Cross appears to be the only one here with any idea of the implications of a society like this--he plays it with a seeming awareness that idle threats and the disingenuous impression of guilt may be all you need to become an alpha dog. (This point also invites a deeper conversation about why Cain is the only one who produces any laughs, however minimal. Does it have anything to do with the fact that he's the only character who has direct contact with God, struck as he is by lightning that inflicts his character's "mark"?) In case you've forgotten, over a decade has elapsed since "Mr. Show" ended, and Cross is still capable of an uproarious performance; he's the lone indication throughout this entire mess that comedians can break away from their usual shtick and deliver something both appropriate and unexpected. In bringing Year One's screenwriters on board for Ghostbusters III, Ramis has essentially assured us that a mistake like that will never happen again. Originally published: June 19, 2009.

*It's still not enough to stifle Year One's homophobia: naturally, the gay Platt character is burned to death by film's end.