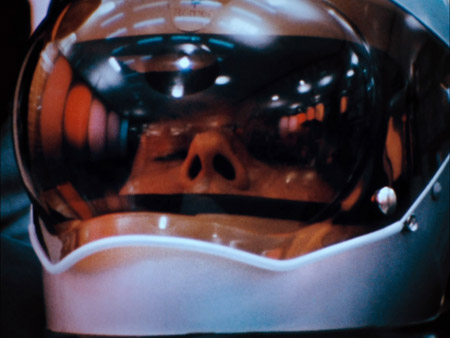 by Jefferson Robbins If computer engineer Fred Stiller (Klaus Löwitsch) doesn't realize he's a digital simulation, you can forgive him for not having seen The Matrix. Rainer Werner Fassbinder's two-part 1973 movie for German TV, World On A Wire, populates Stiller's environment with so many characters who are obviously automata, of greater and lesser sophistication, that he really should get a clue. Most of the people he encounters are over-painted, pancaked and rouged to the point of looking like mannequins or clowns. There are the beautiful women who materialize exactly when needed and stand by for male appreciation. There's the bartender who stands waxen until, as if activated, he lunges forward to offer a cocktail. Even Stiller's own responses to stimuli seem at times posed and inauthentic. But we suspect Fassbinder's satirizing a notoriously affectless society. The distant miens of Stiller's peers and strangers could simply reflect a heart-freezing German ennui--or a universal egotism, in which we mentally reduce everyone not in our immediate circle to the status of clockwork extras.1

Stiller heads a state-funded program to build and manage Simulacron, a computer model that generates reliable social and economic forecasts of the coming decades. It does so by imitating our world so completely that the fully-conscious "identity units"--synthetic people--who inhabit the model do not realize its artificiality, or their own.2 The strange death of a senior engineer and the inexplicable vanishing of a security chief--from place and memory alike--lead Stiller down a rabbit hole, bumping up against Mephistophelean institute director Siskins (Karl-Heinz Vosgerau), who's hungry to profit from Simulacron's data. He's aided and enticed by the missing man's gorgeous daughter Eva (Mascha Rabben), as well as by the zaftig secretary Gloria (Barbara Valentin). Along the way, he ventures into the Simulacron construct to grill  Einstein (Gottfried John), an identity unit painfully aware of his state of nonbeing. The artificial personae at this level are even more heavily painted than Stiller's "real world" contemporaries, though they react more genuinely: Einstein aches to flee his virtual Habitrail, and a unit Stiller bullies out of the phone booth where one exits Simulacron (a conceit paralleled in The Matrix) responds to the abuse just as indignantly as you or I would. Levels of reality and identity begin to peel back, and Stiller's increasingly-frequent migraines (heralded by Gottfried Hüngsberg's assertive electronic drones on the soundtrack) lead him to the inescapable conclusion: He's being hacked, by a computer operator much like himself, on some higher stratum of the universe.

It's easy for a society that has by now experienced William Gibson, the Wachowskis, and "The Sims" to dismiss World On A Wire, but Fassbinder's piece is about existential enlightenment and struggle within a framework of noir-style gumshoe beats, nervous chase scenes, and corporate intrigue. Stiller embarks on these adventures while trying to hold his mind together in the face of faith-shattering revelation. He becomes a King Lear of his corporate office, muttering and fidgeting his way through board meetings as Siskins and his underlings openly plot to oust him. His contortions over the truth of his world look a lot like horrible panic attacks. This is stuff Neo coped with by vomiting once, then learning kung fu. Stiller, alas, has no outlet: He's trapped in mounting anxiety until his maker, omniscient and invisible, decides to delete him. Just like the rest of us.

Fassbinder and Karl-Heinz Vosgerau adapted World On a Wire from American writer Daniel F. Galouye's 1964 novel Simulacron-3--a book Philip K. Dick should have written and sort of did, thematically, in short stories and novels throughout his thrillingly unhinged career. Stiller and his peers live in a world of misdirection and delusion, giving Fassbinder vast leeway to pose characters against their mirrored selves. The pattern begins as crazed engineer Vollmer (Adrian Hoven) presents a hand mirror to a state bureaucrat and asks, "What do you see?" Here's the beginning of one of Fassbinder's satirical threads: It's Philosophy addressing the State, which sees itself as the sole reality. From there, I lost count of the number of times Stiller speaks out of a reflective surface, addresses someone else's reflection, or encounters faces occluded by translucent barriers. Even in spaces where you'd think the camera would find no room for this, as when Stiller visits staff psychologist Hahn (Wolfgang Schenck) in his tight little study, there are reflections gazing at reflections. In his colour palette, his Paris locations3, his production design (by Kurt Raab, who also acts in the film), and his shot angles (courtesy outstanding DP Michael Ballhaus), I see Fassbinder inventing New Wave--not the nouvelle vague cinema, but the kind of aesthetic that would embed itself a decade later in pop music videos and Slava Tsukerman's Liquid Sky. Conceptually, of course, it prefigures the unwoven-reality-film cascade of 1999: The Matrix, eXistenZ, and The Thirteenth Floor (itself another adaptation of Simulacron-3).4

Fassbinder deploys the cast like good-looking chess pieces--but what chess pieces! Löwitsch has the clench and intensity of a compact, bowlegged Harrison Ford. He's springy and hungry, bored but wolfishly alert. Like other characters, he's prone to strange eruptions, but in Stiller they're usually expressed as bursts of action-hero physicality: Here's a computer dork who's nonetheless fit enough to hurtle fences like a parkourist. Löwitsch plays charmingly off Valentin's fatale but less convincingly off Rabben, whose beauty becomes an opaqueness. The tragedy of her character--a woman nursing an impossible love, perceived only as a love object herself--isn't clear without hindsight. Members of Fassbinder's standing troupe are present in bit moments, including Magdalena Montezuma, Ingrid Caven, Margit Carstensen, and El Hedi ben Salem (one year before Ali: Fear Eats the Soul), as one of Siskins's black-hatted enforcers. A film in which the characters are, in narrative terms, playthings must have appealed to Fassbinder, infamously manipulative in his personal life and an aggressive chronicler of interpersonal manipulation in his work. Yet freedom from such manipulation is the quest of World On a Wire. "I am," Stiller murmurs in the enigmatic coda. Maybe Heaven is eternity in a small blue room with Mascha Rabben. It wouldn't necessarily be hell. 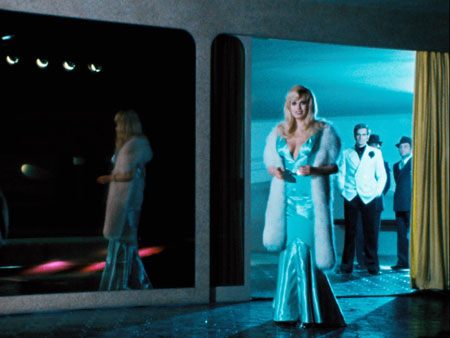 THE BLU-RAY DISC
World On a Wire arrives on a Criterion Collection BD with less scholarship than I've come to expect. That's not a bad thing--a scholarly audio commentary, for instance, might have mostly subtracted from the film's innate mesmerism. (And considering the picture's length, disc space may have been an issue.) Restored in 2010 under Ballhaus's supervision, the film looks as clean as fresh film stock in its 1.33:1, 1080p presentation. This being a 16mm production, the heavy patina of grain is a given, but its buzz soon lapses into the background and, perhaps, adds to the air of unreality in the proceedings. (Ditto the slightly blunted definition.) The restoration pays attention to Fassbinder's adventurous use of light, although the transfer struggles in the darkest scene, Stiller's underlit backseat chat with Eddie Constantine. Nothing is lost in the German-language LPCM 1.0 track, which maintains dialogue clarity while letting Hüngsberg's score ping and wobble evenly about the room. The two-minute trailer that heralded the 2010 theatrical release is also onboard in HD.

German film lecturer Gerd Gemunden assesses the film from multiple angles in a 34-minute, HiDef talking-head piece. The vastly prolific Fassbinder was just 28 circa World On a Wire, and fiercely ambitious to reach a large audience. Television was one route, given that Germany at the time had only two TV channels and his two-part film was almost guaranteed a 50% audience share. But perhaps owing to the demands of a home audience, Gemunden says, "It has a charismatic hero that you do not find all that often in Fassbinder films."

"Fassbinder's World On a Wire: Looking Ahead To Today" (50 mins., HD/German DD 2.0) is a 2011 round-robin of Fassbinder's enablers and co-conspirators, bookended by a telecine session at which Ballhaus holds forth on the film, its shooting challenges, and its director. (Juliane Lorenz, Fassbinder's late-period editor and one of his former wives, directed the documentary.) Ballhaus notes that for many smaller roles, Fassbinder used actors from an earlier cinematic era who would've resonated with German audiences--Adrian Hoven, Ivan Desny, Elma Karlowa, and Valentin herself, who came to fame as a va-va-voom cheesecake star in the 1960s. Rather than familiarity, the ploy was meant to evoke alienation, Ballhaus says: "The cast alone is what made you think they were from another planet." Co-writer Müller-Scherz outs Löwitsch as a disciplined alcoholic who kept himself in shape for the role of Stiller. "He was perfectly in control of his drug," Müller-Scherz says. "...He could work under the influence." The two writers had to pay for the rights to the novel out of their earnings from WDR TV, which balked at the price, yet Müller-Scherz recalls the production period--searching for futurism in a growing Paris cityscape--as one of his and Fassbinder's happiest times. The doc ranges a little farther afield, to science-fiction fan Moritz Eggert complaining about the film's mystifying end scene and cyberneticist Roland Blach demonstrating a virtual-reality environment, yet these episodes don't gain much traction.

Critic Ed Halter provides the de rigueur essay for the keepcase pamphlet, wrapping Baudrillard and McLuhan into the argument and reinforcing my perception that World On a Wire "signals futurity through the most alienating elements of contemporary design." The future is Now, and always has been.

1. In Fassbinder's world, waitstaff function this way quite a lot. A statement of class, perhaps, that servers are the least "activated" identity units in the computer environment, like the table-clearer (Elma Karlowa) who interrupts Stiller in the midst of a fistfight to ask if he still wants his beer. return

2. Identity unit characters refer to themselves as "a bundle of electronic circuits," a failure of technical fluency that attributes "personality" to the hardware instead of the soft. You saw this a lot in ’70s SF. return

3. Stiller's glass and concrete research campus reminds me of the college halls where my father taught for years--while simultaneously reminding me of the future. Modernist ’70s architecture and design is a constant foreshadowing of a coming age that never quite arrives, yet still defines the landscape I expect to one day look down on from my fusion-powered flying car. return

4. I watched The Thirteenth Floor almost immediately after World On a Wire, neither knowing nor suspecting that it was a) based on the same novel, and b) produced by Michael Ballhaus. Streaked with the fingerprints of co-producer Roland Emmerich, however, it is nowhere near the same film. return

Strange, I don't know how my comments were translated in the subtitles, but I am sure I did not complain about the final scene of "World On A Wire" because I absolutely love it!
Best,
Moritz Eggert ("science fictio fan" and composer)