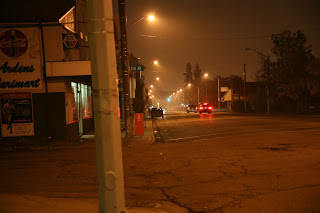 by Angelo Muredda A vérité portrait of a group of sex workers in Edmonton, Rosie Dransfeld’s Who Cares? is a sobering and uncondescending look at vulnerable people who work without a safety net on the outskirts of society. The film begins with a pair of police officers on a taskforce called Project Care, which spearheads other departments’ investigations of sex worker murders by registering the DNA of the living, so they can be identified in the event that, as one officer puts it, “something bad should happen.” That’s an alarming concept, and Dransfeld leaves the officer’s euphemism about an intervention that only happens after death hanging uncomfortably. It isn’t that their heart is in the wrong place, the film suggests, as the men express real sympathy and concern for the daily abuse these women face, but that their structural response to the problem leaves these workers invisible and unprotected until they’re gone.

Dransfeld redresses this elision of the living person by periodically handing filming duties off to former prostitute and recovering addict Courtney, who points out that most people know her only as “The Prostitute from 117th Ave.” “No one ever sees me,” Courtney confesses after a conversation with a male patron at a bar about how she’s getting her life back on track instantly segues into a pickup attempt that negates her story and suggests the man hasn’t even been paying cursory attention to her. The doc is an unflinching response to her complaint, which gives Courtney and Shelley, the other main subject, opportunity to narrate their personal histories both at work and in the daytime on the corners they first claimed for themselves as teenaged prostitutes. Dransfeld goes a long way toward demystifying her two subjects and registering them as women – defining them not just by their labour (or their DNA) but by their personalities. Shelley is caustically funny, trash-talking a john who calls her a “whore”: “Get it right: I’m a cocksucker.” But that’s a rare moment of levity amidst both women’s devastating stories of physical and emotional trauma. Who Cares? is a hard watch, but bravely unsentimental and committed to its subjects as both workers and people. ***/****