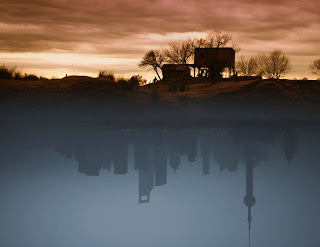 by Angelo Muredda “The world spins, but they’re always below us.” That’s one of the many pearls in Victor Kossakovsky’s ¡Vivan Las Antipodas!, a high-concept travelogue that fleetly covers four pairs of dry-land spots at exact opposite ends of the earth. The opening epigraph from Lewis Carroll aside, Kossakovsky gravitates to such homespun maxims rather than headier stuff, and the film is all the more dazzling for it – an intoxicating riff on the Looney Tunes bit where Yosemite Sam digs through an outcrop and lands in China. While he’s interested enough in the locals, particularly the source of that comment, two guys who ferry busted cars over their pontoon bridge in Argentina, the director generally turns his Red camera to beautiful images of animal life, fauna, and architecture, weaving strange textures out of his startling juxtapositions between, for instance, a volcanic rock formation in Hawaii and an elephant’s hide in Botswana.

These conceptual match cuts might have felt precious in less assured hands, but Kossakovsky comes at his antipodes with a quixotic rather than a programmatic spirit. He’s happy to capture accidental overlaps and stark contrasts of this sort without jumping to inane grand statements about how we all inhabit the same earth. No such editorializing here. Shifts between locations are signalled by steady rotations of the camera – and occasional bits of digital trickery that see entirely different skylines reflected in geographically distant bodies of water – which throw us off balance, forcing us to cross that Argentinean bridge into an upside down tunnel in Shanghai. If the material he captures is fortuitous, guided only by a playful mandate to leave no strange cat or toothless dog unfilmed, Kossakovsky’s minimalism and formal rigor are nevertheless unimpeachable. This is the weirdest and maybe most rewarding film here. ***1/2/****