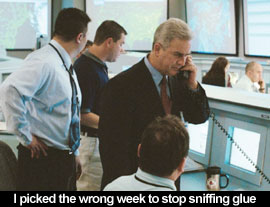 by Walter Chaw I guess when you talk about a movie like Paul Greengrass's United 93, you have to talk about the propriety of the project: Whether death, fear, and suffering at its most obscene is something we should try to know or gratefully shield ourselves from. Should 9/11 already be an Oprah special and a national holiday? It's an essential question, a defining one--and on either side of the question's divide, you'll find one person who thinks we should see our soldiers' caskets draped in American flags and another who feels that seeing war casualties is somehow bad for morale or, if our fearless leaders are to be believed, somehow unpatriotic. Ignorance is as blissful now as it ever was--it's one aphorism the film honours. Another is that you reap what you sow: The belief that our civil liberties, for which we eagerly fight and die to protect on foreign soil, are the first things we seem to sacrifice in times of peril (including a vocal rabble wondering if we're "ready" for a 9/11 film), is far stickier when the proposition before us is that Islamic extremists don't like us because of that which defines us as Americans. ("They hate our freedom" is the party line.) So when our government begins to infringe on our personal freedom after a meticulously organized and coordinated terrorist attack took us completely unawares (I still recall with a shudder how then-Secretary of State Condaleeza Rice claimed that no one could have imagined it) more than four years ago, that means--more than over twenty-one hundred military dead (and counting) does--that we've already lost.

United 93 is a deeply divisive, deeply political picture that, in portraying the "facts" as we either know them or want to know them or want to deny them, paints a portrait of an administration so unprepared for the possibility of a full-scale terrorist attack on American soil that the only person with the authority to set the rules of engagement in that situation for a military response to the immediate threat was unavailable for those precious minutes at the beginning of the crisis, where it could have made a difference. Greengrass is fairly unapologetic as far as Bush Jr.'s conspicuous absence is concerned, and during the height of the crisis as it's portrayed, the frustration of military and civilian leaders waiting for a word from on-high is a key component of the tension. In other aspects, though, there's an equanimity to Greengrass's approach that some will remember from his treatment of another still-fresh historical event, Bloody Sunday, a film that recreates the moment the IRA became a viable terrorist organization, just as United 93 is a film about the moment the United States became an overt stick stirring an already covertly-riled hornet's nest. The two films could be companion pieces in their mutual suggestion that western civilization is sliding backwards--maybe all the way back to the Crusades that Bush Jr. name-dropped so casually, so appallingly, at the beginning of our latest troubles.

Greengrass's film is a clever thing, lingering in its apparent vérité randomness for an extra beat on a sexually suggestive perfume ad in the airport terminal as a terrorist passes by--or on a Westerner's foot resting casually against a stranger's luggage. United 93 is about a sum of offense; it's about a hijacking of technology by a sophisticated and worthy opponent with a list of grievances; and it's about arrogance, too, the common refrain of air traffic controllers and military watchmen in the film being that it's unthinkable that a hijacking could occur on an American airplane. A foreign passenger presumably more experienced with violations of this sort pleads with his peers to do nothing, demonstrating with subtlety the way that the parameters of the game were suddenly and irrevocably changed by hostiles who had apparently been studying the same rules of engagement. The portrait of their actions is frightening because they don't seem the frothing Hun we'd like to see them as, but rather they appear to be intelligent human beings of the belief that they're doing the right thing in the name of their god and country. They're portrayed as we like to portray ourselves, especially when we're put upon. It's frightening that they can use our technology against us--that they understand that what makes us great is always the same thing that makes us weak. (Greengrass shows how the very qualities that mark the heroes of Flight 93 and those that would cause a country to favour a President fond of championing inarticulate aggression in the name of aggression are one and the same.) Suddenly United 93 is a sharp, uncomfortable microcosm.

The film's finale, depicting events that will never be known in the detail Greengrass presumes to know them, are the only ones worth a real moral discussion, because it's here that the director dips heavily into conjecture and, in that license, reveals his thesis. At the picture's climax, Greengrass shows passengers and terrorists alike deep in prayer to their respective deities before sending everyone in the whole goddamn mess to their graves in the cool whimper of a cut-to-black. The suggestion is that the only possible resolution in this kind of religious war between fundamentalist extremes is mutually-assured destruction. There are no real heroes or villains in United 93 (indeed, during the last rush to the cockpit, Greengrass envisions the passengers battering one terrorist's head to a bloody pulp with a fire extinguisher long after he's been neutralized), just victims fed to a complete failure of ideology. In Greengrass's appeal to the bloodlust of his audience, there's a certain contempt for the patness of a bloody Old Testament resolution that's well-placed and, given the hysterical reaction of some members of my screening audience, not at all in vain. It is at its core a cry for reason in the offering of the extreme before an impossible situation escalates into, I guess, what it's escalated into already or, if you take the more cynical view, what it's already been for thousands of years. United 93 is tightly-constructed--a painstaking progression of circumstances (what some see as a corporate shill of a title, I see almost as an idea of order) and, along with V for Vendetta, it's another early-2006 film about terrorism that is complicated, controversial, and, most bracingly, strikes at the heart of how far we've come since 9/11. And how far we haven't. Originally published: April 28, 2006.