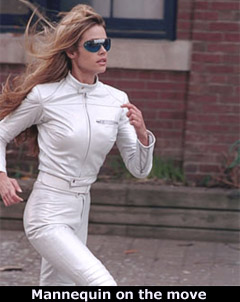 by Walter Chaw A comedy with ideas, courage, and intelligence, Malcolm D. Lee's follow-up to his surprisingly good The Best Man is the blaxploitation riff Undercover Brother--and man, when it's right, it's really right. Unfortunately, it's only right about half of the time. Its digs at racial stereotypes and dedication to honouring the images and conceits of black cinema from the Seventies are dead on-target for the most part, while its attempts to marry it all into some sort of spy plot are subject to the same extended dull spots suffered by any dinosaur Bond flick. All is forgiven, though, when Eddie Griffin, as the titular afro-super-agent, splashes through a window like Dolemite, does a "white man's" dance while singing a karaoke version of "Ebony and Ivory" (with über-bimbo Denise Richards, not in on the joke), and navigates his caddy through a tailspin without spilling a drop of his orange soda.

Undercover Brother Anton Jackson (Griffin) is a "ghetto Robin Hood" and master of disguise sneaking into banks to erase mortgage records so that lower-income (presumably black) families can avoid having their houses foreclosed on them. The rich socio-political commentary of a tremendous prologue only gets richer as Anton is recruited by shadow agency The Brotherhood (Chief (Chi McBride), Sistah Girl (Aunjanue Ellis), Smart Brother (Gary Anthony Williams), and Conspiracy Brother (Dave Chappelle)). The Brotherhood is engaged in a never-ending struggle against the forces of Whiteness embodied by forever-in-darkness The Man and his head lackey Mr. Feather (Chris Kattan), who's waging his own war against his inner soulster--always one Mary J. Blige song from jiving loose. (That Kattan is almost unwatchable, an actor swallowed whole by his own shtick, is the first sign that Undercover Brother isn't going to be a film that lives up to its promise.)

The Man's latest nefarious plan is to feed the first credible Black presidential candidate (Billy Dee Williams) a brain mickey that will make him opt for the gaffed life of a fried-chicken magnate. The commercial for his chain "The General's Chicken" embodies in two minutes what Malcolm Lee's cousin Spike's Bamboozled couldn't convey in over two hours. When Undercover Brother turns its gaze like this on the images assigned in our culture to its two dominant races (with boy bands, mayonnaise-love, and NASCAR on the one side--platform shoes, the gender-divided idolatry of white women--a.k.a. "Black Man's Kryptonite"--and the guilty denial of O.J.'s culpability on the other), what emerges is a sociological treatise scathing and observant. Even the issue of sampling has a destabilizing moment as Anton and his new squeeze White She-Devil (Richards) listen to Michael Bolton's remake of Sisqo's "Thong Song" ("I usually don't like it so heavy, but this is kind of catchy!").

Undercover Brother targets the fashion of the 1970s while exalting it to the status of artefacts of a failed revolution; likewise, it takes a dual approach to its breaching of politically correct taboos, acknowledging the unavoidable truth of racial differences as it pokes equal fun at those who deny them (liberals) and those who wield them (conservatives). It houses its smarts in a vehicle that borrows scenes and style from movies as diverse as Billy Dee's own Hit, Jack Hill's Coffy and Foxy Brown, Shaft (of course), Bare Knuckles, and Jim Kelly's kung fu sagas--especially Black Belt Jones and Enter the Dragon, from which a Kelly sequence appears on a television set at one point in Undercover Brother. And when it resists bogging it all down with flat gags or, worse, extended periods free of both racial commentary and blaxploitation homage, Undercover Brother is something canny, cunning, and hilarious. It's so good in these spots in fact, that it's a shame it ever wastes its time on anything else. Originally published: May 31, 2002.