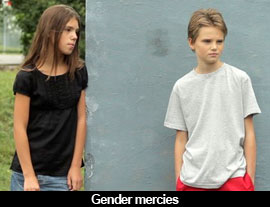 by Angelo Muredda "It suits you." So Lisa (Jeanne Disson) tells her new crush, Mikael (Zoé Héran), after she's given him a lipstick-and-rouge makeover. What Lisa doesn't know is that Mikael is nominally Laure, a 10-year old girl who's just moved into the neighbourhood and is more interested in donning baggy pants and stretched shirts to play soccer with the local ruffians than in wearing the feminine outfits her mother (Sophie Cattani) hangs in her closet. Tomboy, director and screenwriter Céline Sciamma's poignant and sharply observed follow-up to 2007's more acerbic Water Lilies, smartly downplays the precarious position Laure is in: trying on a new identity in this foreign environment could be disastrous today, it suggests, but there's always tomorrow. Sciamma mostly steers clear of the prescriptive aphorisms about girlhood that Catherine Breillat's recent output trades in. Instead, she gravitates towards the more mundane ambiguity of moments when adolescents who are already in a highly transitional state grow wise to the arbitrary way their identity gets decided for them by accidents of birth and other people's coercive gestures. You get the sense that Laure is all-too conscious of how innocent gifts of dresses--or, for that matter, lipstick--might actually be gender-normative roadmaps, but until an unfortunate last-act revelation, the film doesn't reach for the polemic; any revelations come only through cinematographer Crystel Fournier's tight hold on our protagonist.

In abstract, Tomboy seems a bit slim, but its depiction of children preoccupied with presenting their bodies and the selves they supposedly encapsulate to the world is unexpectedly substantial. There's a lovely scene early in the film, for instance, when Laure and her 6-year-old sister Jeanne (Malonn Lévana) sculpt each other's hair in the bathtub into amorphous shapes temporarily glued in place by shampoo. Jeanne later has her older sister pose for a portrait, a marker sketch that's all shaky circles and enormous brown dots for freckles. Héran and Lévana are completely without affectation; they make a terrific pairing, responding naturally and more or less without judgment to one another's strange ideas. What's a little gender uncertainty among siblings who already have a secret compact like theirs? Their free moments together are contrasted with Laure's increasingly tense outdoor encounters with Lisa, who will surely want to play doctor someday, likely before her crush gets outed as a girl in the fourth-grade roster. Sciamma is deft at shifting between these safely domestic and more unruly outdoor environments. This is high-concept filmmaking without the fuss that usually accompanies it--think, for instance, of Pedro Almodóvar's latest confection The Skin I Live In, which arrives at roughly the same conclusion about the unclear relationship between gender and body but only after some convoluted narrative backflips.

While the closing scene is a nice grace note, free of the tragic hand-wringing that often accompanies such identity-in-crisis films, I don't buy Tomboy's last act on the whole. It hinges on some callous behaviour on Laure's mother's part, and nothing in Cattani's otherwise-affecting performance up to this point prepares us for how she forces her daughter to atone for her relatively minor deceptions. That could be the point--that perfectly liberal people turn into tyrants in search of clear definitions when it comes to their own children--but something about the tone of inevitability that hangs over these events suggests that Sciamma intends for us to read her solution as the only viable one. It's here that the film's tight focus on Laure and lightness on broader sociological details become deficits. We're suddenly forced to read the Parisian suburb Laure has moved to, glimpsed only through the group of boys (plus Lisa) she meets outdoors, as a stand-in for a more systematic societal intolerance of all forms of queerness, which Cattani's character is either embodying or cruelly preparing her daughter for. It's a bit of a shame, because Tomboy is otherwise a refreshingly personal and non-allegorical –portrait that doesn't presume to have its enigmatic protagonist's life all mapped out. Originally published: December 7, 2011.