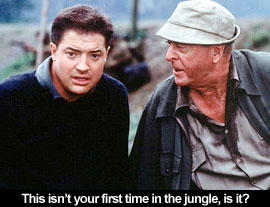 by Walter Chaw Walking a fine line between nostalgia and regret, irony and earnestness, Philip Noyce's The Quiet American, adapted from the novel by Graham Greene, is a lovely film that captures, like Hemingway's A Farewell to Arms, the delicate balance between romance in the immediate foreground and the backdrop of war and politics. Evoking the colonial decay of Greene's work while evincing one of the best performances of Michael Caine's career, The Quiet American stars Caine as a British journalist in Vietnam who falls in a hopeless kind of love with a beautiful girl a third his age. His subsequent desperation and jealousy feel real; take note of an anguished scene in a bathroom stall--Caine suddenly seems to be getting better with every role.

Thomas Fowler (Caine) is a foreign correspondent seduced by the sultry promise of a Vietnam still under the uneasy control of French colonialists. Not writing much anymore when the film begins (his existence taking on the dimensions of an Al Stewart song), Fowler's taken up with his mistress Phuong (Do Thi Hai Yen) in a state of purgatory, caught in the midst of the heaven she represents and the hell that Alden Pyle (Brendan Fraser) brings. Pyle is the titular Yank, an unassuming optometrist by trade, in country for the well-being of the third-world nation's eyes. His occupation is important, particularly as it relates to The Quiet American's themes of knowledge and ways of seeing (the journalist, the eye doctor, the mistress's faith, and the sister of the mistress who doesn't trust Fowler's intentions)--and important again in the introduction of the key revelation of the picture's third act.

The Quiet American, however, is more about the ephemeral nature of joy, reminding a good deal of Tender Mercies in that respect, particularly the key line from that film, the heartbreaking "I don't trust happiness." Expressed in so many words, the sentiment of gathering rosebuds is trite, yet expressed as Noyce does--in a series of wonderfully-composed images married to novelist Greene's melancholy shame--the platitude becomes something almost unbearably poignant. The whole of the film is balanced on the knife's edge: each relationship at its crisis, the political situation at its breaking point, each façade worn thin by inattention and Vietnam's lulling feeling of otherness. The look of the film seems deliberately artificial, its interiors and exteriors alike drenched in a decadent complexity and warmth. Even the police station where Fowler finds himself after The American is murdered (the film opens with Pyle's corpse on a slab) is shot in earth tones and soft light.

Belonging to a different era in filmmaking and a different ethic in literature, The Quiet American is the more intricate of the two Noyce films for 2002. The other, Rabbit-Proof Fence, while very fine, is a simple tale told with a deceptively epic feeling; The Quiet American, on the other hand, is an exceedingly complicated tale told with a deceptive simplicity. That it never stops feeling like an exercise and a film are perhaps by design--fables are meant more for their didacticism than their realism--but the aggregate is the same. There is much to admire about The Quiet American (its professionalism is above reproach), but like Fred Schepisi's The Russia House, another screen translation of a hale British author's work directed by an Australian and starring a European and an American, coolness ultimately undermines its sweep and scope. Originally published: November 22, 2002.