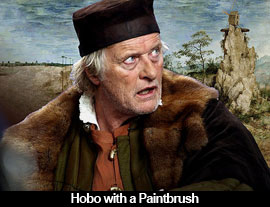 by Angelo Muredda The opening voiceover in Polish-American filmmaker and painter Lech Majewsi's dry but compelling The Mill and the Cross nicely prepares us for both the fastidiousness and the playfulness that follows. "I want to do something about their clothing," Flemish painter Pieter Bruegel, a droll Rutger Hauer, says as he surveys a handful of the 500-odd subjects that populate his bustling 1564 painting "The Way to Calvary." At this point it's still a work-in-progress, a living tableau of Christ's crucifixion filtered through the artist's critique of the Spanish occupation of the Netherlands. Depriving us of the panorama that comprises the finished artwork, Majewski offers only a limited frontal view of the wailing women in the foreground, embodied by actresses who stand in stark relief against the computer-generated backdrop of the painting. As the camera tracks alongside them, it gets snagged, in a manner of speaking, on their dresses: it halts its procession so that Bruegel himself can enter the painting as a makeshift costume designer, fussing over their fabrics and setting the gravity of the scene through his sartorial choices. It's a smart statement of purpose, announcing Bruegel's and Majewski's simultaneous interest in the particular and the allegorical, and placing the film at various crossroads--between, for instance, art history lesson and dramatic recreation, and, more interestingly, between artifice and accident.

This material might have lent itself to a hyper-explanatory treatment, saturated in general historical background information as well as in generic biopic-style humanizing of the artist, but Majewski and co-screenwriter Michael Francis Gibson, an art critic on whose book the film is loosely based, have nothing so facile in mind. Aside from some stilted expository speeches from Bruegel's frilly-collared friend and patron (Michael York), in which he pontificates on the brute tactics of Spanish soldiers to a dazed-looking woman huddled in a corner, context is left for us to either decipher or abandon through largely dialogue-free vignettes with a host of peasants, who each go on to make their subtle mark on the canvas. As for Bruegel, he remains an aloof presence, tending lazily to his litter of armpit-farting children and napping in the grass, occasionally breaking to rattle off nascent aesthetic theories and cryptic explanations for his work. His political investment in these peasants' rough lives is hard to divine, and it's just as well, as they're neither fully real nor fully recognizable as types as presented here.

The individuals who register do so because of the flashes of cruelty that interrupt their otherwise banal lives--the fate of one man savagely beaten by redcoats for obscure reasons, then hoisted on a rack, to be pecked into oblivion by crows, is lyrical, brutal, and eerily concise--or because of the inherent visual intrigue of their work. The miller, for instance, is at once hollowed out for his allegorical potential in the geographical schema of the painting--his elevated position lets him preside over the commotion below with godlike indifference--and rendered with lovely attention to detail. When the townspeople have convened and assumed all the right places late in the film, Majewski first pans up to the miller as if to ask for permission to proceed, and it's no wonder he does: the worker's mechanical daily routines and the slow transformations in which they result are hypnotic fodder for a pair of artists, Bruegel and Majewski, who are clearly enamoured with intricate processes aimed at creation. Majewski follows the grain through the mill to its resting state as flour with a deliberate pace that will enrage as many as it will absorb, but there's real pleasure to be found in the film's unhurried rhythms, if you can get into them.

There's also a modestly inventive streak that's infectious, in spite of the gravity of the premise. Majewski returns frequently to the work-in-progress glimpses with which we start, in stately long takes that frame a peasant-filled countryside through Bruegel's perspective. In a recurring formal trick, the camera roams horizontally through a still, seemingly painted tableau that betrays signs of movement several layers deep: a coat rustling in the wind behind a statuesque cross-bearer here; a restless horse shuffling behind the woodchoppers there. The Mill and the Cross can be a maddeningly flat picture, especially when Bruegel takes to sharing bits of wisdom with York, his interlocutor, who gets an earful of useless interpretive aids like, "Next to it is the Tree of Life, with fresh leaves." But in the end, these ostensibly illuminating asides seem incidental to Majewski's project, and Bruegel is no more the master of ceremonies here than the barely-seen Chaucer is in Pasolini's adaptation of The Canterbury Tales. The real work--like the real fun--of the film is in temporarily busting the painting out of the austere gallery in which it hangs in the closing moments, if only to hold it close enough to our faces that we can see every torn or carefully pressed seam. Originally published: November 18, 2011.