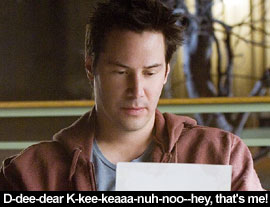 by Walter Chaw I couldn't help but conjecture, while watching the trailer for Alejandro Agresti's inexplicable The Lake House, that when Keanu Reeves' character is poring over a letter, a little thought bubble above his head would say, "Dude, I totally can't read." Continuing to think that is the only thing providing much of a distraction during the laggardly-paced, sloppily-scripted, hilariously-acted proceedings, which, as that same preview gives away, concern the romance of two people separated by two years, exchanging letters through the providence of a magic mailbox. Argentinean director Agresti's visual compositions are meticulous and his eye for architecture is almost as good as that of his protagonist, Alex Wyler (Reeves), but it's cold comfort against the raging inferno of illogic attending this scenic, stupid, Nicholas Sparks-ian shipwreck. Not helping things is Agresti's lamentable penchant for cornpone, exhibiting itself most stridently in the piano-tinkle, magical-elf-opening-a-treasure-chest score and a series of whimsical wipe-edits and dog reaction shots. Among its dedicated sub-genre of time-warp kiss-face (Somewhere in Time, Happy Accidents), The Lake House is a dud, too, frustrating first because its big gushy epiphany is solved by everyone with a working pre-frontal within a second of it happening, and second because Wyler, lagging two years behind his beloved Kate (Sandra Bullock), never once thinks to ask for a lotto number or a World Series winner.

Even within the logic of the film, when Alex misses a date with Kate (he makes a dinner reservation two years in advance of Kate's next night), everyone in the audience not only knows why he doesn't show, but also wonders why Kate doesn't just pick up a phone book and ask what's keeping him. Two years isn't two hundred years, after all, and in this era of shrinking time, it isn't really two years, anymore, either. Just within the rules the film establishes for itself, nothing that these characters do to achieve their inevitable moment of suck-face makes a lick of sense. It's a one-trick pony and that pony is tortured near to death. Worst might be the casting of Reeves (whose romantic films--like the legendarily stupid Sweet November, in which he slings a dish-washing machine over his shoulder and carries it up a fire escape through a second-story window, or the also stupid, if dishwasher-free, A Walk in the Clouds--should be screened in conjunction for a good understanding of pop surrealism) against Bullock: he with his drugged incomprehension, she with her fussy, animated-pig voice (like a non-drag-queen version of Kathy Griffin) constantly chewing itself around the same romcom treacle that should by now belie the perception of her as a smart cookie. Agresti uses tricks to suggest the two are talking to one another, their gentle (some would call it boring) repartee impossible to conceptualize as correspondence left in a mailbox--but there you have it. As a film, then, it's more like a dinner party idea rushed to the drawing board without a middle or a resolution.

Genuinely insipid, The Lake House is home to profession-/dialogue-as-character development, like Alex saying he's an architect because "I like to build things." (Meanwhile, Kate is a doctor because she's "dedicated to caring for the sick.") Alex's sidekick is a ghostly sketch of a brother (Ebon Moss-Bachrach) while Kate is saddled with poor, thankless Shohreh Aghdashloo as her no-nonsense, tough-talking surgical resident--both second bananas are invested with the picture's perfunctory skepticism, and both are shuttled off into the atmosphere as soon as they've given the star-crossed lovers a chance to ooze on about how "Dude, she's like more totally real to me than a real girl... Dude." I liked the sick little black girl who introduces Kate (and us) to the idea that the love story in Notorious is the ideal model for Kate and Alex (brought to us by people who either have a really sick sense of humour or have never seen Notorious), because, truly, what other purpose is there for ailing minority children than to facilitate a date for two upper-class white folks (see also: The Interpreter and its million dead black people). I liked how Alex plants a tree in the past and it materializes, suddenly and terrifyingly, right next to Kate in the future (lucky that it doesn't appear under her or through her). And I really liked how the picture introduces Jane Austen's Persuasion not once, not twice, but thrice, I guess to give the picture a little literary juice. The final nail, though, is a ten-minute finale that tries like hell for inscrutable reasons to transmogrify this trudge through Moronville into a rip-snorting suspense flick (which hinges, of course, on Alex being able to read something and--aye, here's the rub-- understand it as well), wrapping it all up package-neat without also resolving how it is that this thing is at all like Persuasion, Notorious, or even Kate & Leopold. Originally published: June 16, 2006.