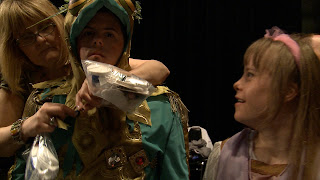 by Angelo Muredda The Frog Princes is so big-hearted you wish it had more to say than “way to go.” Copping its framing device from Rushmore, the film shadows a theatre troupe over a few months as it prepares for its debut performance of The Frog and the Princess. The hook is that the performers all have developmental disabilities, and are part of an initiative headed by Stephen Snow, a psychotherapist who teaches drama therapy at Concordia. “Steve” to his players, Snow comes across as an amiable guy whose high standards inspire self-confidence and a good work ethic in people from whom society shamefully expects little. There’s joy in seeing actors like cutely named Ray-Man, a young man with Down Syndrome, channel their untapped self-confidence into something tangible. Ray-Man makes a sharp contrast with Tanya, a clinically depressed woman with Prader-Willi Syndrome, whose nastiness and frequent minor meltdowns give the film a welcome edge whenever she’s onscreen.

What we don’t get, unfortunately, is a strong sense of either the treatment or the play – not insignificant gaffes, considering Snow insists that the experience culminate in both good mental health and a watchable play. Directors Omar Majeed and Ryan Mullins capture some fun on-the-fly footage backstage when things head south in the first dress rehearsal, but their insistence on hammering home how charming these players are reveals a blindspot: they take no interest in the experience of being disabled except in the triumphant moment when an impairment is overcome. You wonder why Ray-Man is in therapy to begin with, but the film wishes you wouldn't. There’s no shortage of such overcoming narratives about disability, and likeable as its subjects are, this one does little to distinguish itself from the pack. **/****