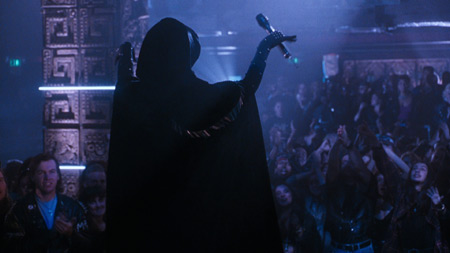 by Walter Chaw Kevin Costner and Whitney Houston have a conversation about Akira Kurosawa's Yojimbo (whose title means "The Bodyguard") in the middle of Mick Jackson's hilarious camp artifact The Bodyguard, the one where Costner plays a barely-vocal lunk and Houston plays a singer-turned-actress with severe personality flaws. And that little chat, occupying a minute-and-a-half or so of screentime, encapsulates everything that's priceless about this flick: It's stupid, embarrassing, and watered-down, but it's also surreal, queer, and hermetically sealed in a rhinestone-studded mason jar. Have no fear, though, as that revelatory discussion of one of the great films in world cinema segues in record time into a heartfelt rumination on the lyrics of a Dolly Parton song, and then into a courtship ritual involving a big samurai sword and a piece of silk. Is Kevin going to sheathe his blue steel in Whitney's purple scarf? Ah, the decadent ribaldry! What could it all mean?

Frank Farmer (Costner) is a blue-collar schlub from a working-class family who hires himself out as a flesh shield for the rich and famous--said rich and famous being, in this example, Rachel Marron (Houston, she of the Muppet eyebrows). The twist that's really interesting is that the Mandingo of this scenario is a white guy and the rich bitch who asks him to put everything on the line for the sake of her continued richness is a black woman. Because there remains a paucity of interracial relationships in American film, much less those which reverse the economic caste issue, it's fair--and sad--to say that The Bodyguard is an important film--praise that is tempered, though, by the fact that under the same criteria, Whoopi Goldberg's Fatal Beauty is an important film, too. Made from an early spec script by master of the genre piece Lawrence Kasdan, The Bodyguard is composed of a couple of fortuitous action set-pieces played for pathos or light comedy and intercut with stultifying character interactions that have Frank running into old buddies with a frequency that suggests ex-Secret Service agents grow on trees. And then there are those wondrously overwrought seduction melodramas.

Proof positive that fame is ephemeral, particularly for the explicitly untalented (Houston) or fatally unhinged (Houston, again), a line or two where oily manager Sy (Gary Kemp) complains that Frank is cramping Rachel's style during her brief solar flare of popularity rings unexpectedly poignant. The great Bill Cobbs is great again in a mentor capacity as the guy who hires Frank to be Rachel's protector (ditto Ralph Waite as Frank's daddy), and scenes where Costner expresses his sexual jealousy by beating the crap out of some guy smoking in a hotel kitchen ring with a satisfying caveman truth. But the bulk of The Bodyguard is Lifetime Channel stuff: bodice-ripping and noble ass-kicking enacted by a pair of played-out superstars engaged in the sometimes-naughty fantasy of princess bride and knight errant. When Rachel is finally tamed, agreeing to do anything, anything, Frank wants, however, it suddenly becomes a different kind of fantasy altogether. Is it surprising that The Bodyguard was a box-office smash?

THE DVD
Warner's Special Edition reissue of The Bodyguard presents the film for the first time on DVD in its proper aspect ratio, but the 1.78:1 anamorphic widescreen transfer wasn't exactly worth the wait. Though colours appear natural, a few outdoor scenes in natural light are washed-out, drab-looking, and lacking in detail. (On the other hand, this Vaseline-smeared effect of Glamour Shots photography fits in pretty well with the Harlequin intentions of the piece.) Grain, wonky shadow detail and the stray minimal flaw and banding defect balance out the fact that there's minimal edge enhancement. I don't know how much of this to blame on the source elements, which should, for a 1992 film, probably be in better shape. That being said, the nightclub scenes sparkle, and as two of the film's major sequences occur in rowdy interiors, no harm, no foul when you get right down to it. Meanwhile, the remastered DD 5.1 audio sounds consistently fabbo, with crowd scenes in particular rendered with fidelity, good volume, and excellent surround effects. The finale at the Oscars is as bombastic and artificially-bloated as the real deal.

As Special Editions go, this one's pretty light on extras. A 25-minute "Memories of The Bodyguard" features new interviews with Kasdan, Costner, and, in footage from 1992, Houston. Weird that Houston isn't in the new stuff; maybe she was at the Wailing Wall while they were shooting it. Key revelations are old revelations: that this is Costner's baby and that it was a project originally intended for Steve McQueen (hence the haircut) and Diana Ross (hence the crazy). Personally, I would have liked to hear Kasdan reflect on where his audience went and why, in his estimation, puerile garbage like The Bodyguard rakes in a mint while decent little pictures--his own Mumford, for instance--get the ol' shaft. An anamorphic theatrical trailer and the music video for Houston's "I Will Always Love You" (which helped make The Bodyguard soundtrack something of a social phenomenon all by itself) round out the traditionally keepcased platter. Originally published: February 22, 2005. 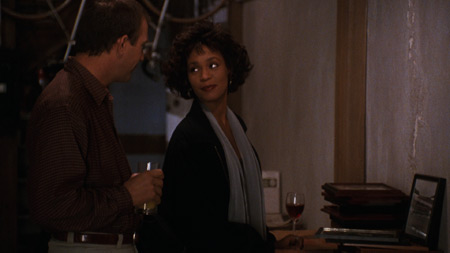 THE BLU-RAY DISC
by Bill Chambers Warner's fortunately- but not cynically-timed Blu-ray release of The Bodyguard (it was scheduled for release prior to Whitney Houston's death in recognition of the picture's twentieth anniversary) contains a remarkably filmic 1.78:1, 1080p transfer. The newfound presence of true, crunchy grain (indeed, I'm inclined to believe, if not necessarily lament, that the original negative was not the source of this master) restores a lot of that diffuseness that had been a key element of Andrew Dunn's cinematography but compressed out of the image on DVD. HD also, predictably, ramps up fine detail, and while this remains a soft-focused affair, the presentation is clear enough to detect pockmarks in Houston's otherwise-creamy complexion. Colours are presumably more accurate than they were in NTSC, the movie's two-tone palette of violet and honey having nuance here unseen since the theatrical release. The film's sound, preserved on BD in 5.1 DTS-HD MA, continues to defy its age. Unlike a lot of early multichannel mixes, this one doesn't go overboard on the split-surround effects but doesn't ignore the possibilities of the discrete environment, either, and the crowd scenes are filled with clever localizations that ramp up their claustrophobic intensity. The LFE channel is robust and Houston's vocal gymnastics are reproduced with glass-shattering clarity. Returning from the Special Edition DVD, in standard definition: the much-played video for "I Will Always Love You"; the retrospective making-of "Memories of The Bodyguard"; and the (unlisted) theatrical trailer.