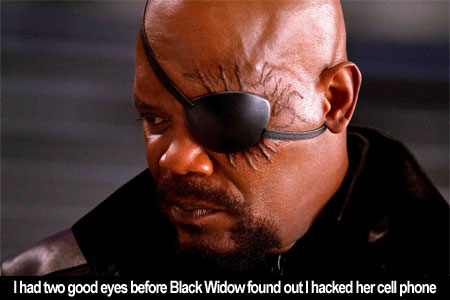 by Walter Chaw Joss Whedon delivers his definitive artistic statement with the completely inoffensive, agreeably stupid Marvel's The Avengers. It's a giant, loud, sloppy kiss planted right on the forehead of a fanboy contingent that will somehow find jealous dork solidarity in the largest product excreted this year by a Hollywood machinery that's the playground now of Whedons and Apatows and Farrellys, where it used to be the domain of John Fords and Sam Peckinpahs and Von Sternbergs. Not a full-grown man among them, they're drunk on power and nerd cred, making references to their references and amazed that someone like Scarlett Johansson returns their calls (or that they could be married to someone like Leslie Mann in a world not gone mad). The Avengers is a brilliant balance of indecipherable against crowd-pleasing, with bouncy fight scenes, one-liners as character development, and the absolute confidence that everyone in the audience has on purpose seen each of the films designed as a prequel to this one. As the pendulum swings back to pleasuring 18-year-old boys vs. 16-year-old girls (despite Titanic in 3D's attempts at swinging it back), take heart that if, at the end, it only reminds of the loudest, most expensive team-up episode of "Shazam!", it at least has the sense to deliver the best Hulk moments...ever.

In a nutshell, as if it matters: Nick Fury (Samuel L. Jackson), head of super-secret government agency S.H.I.E.L.D., assembles the titular super-freaks to battle Norse god Loki (Tom Hiddleston) and his band of bloodless, PG-13 battle droids (plus a troika of armoured, flying manatee). Loki can either teleport or project a hologram of himself, making him a formidable foe to brother Thor (Chris Hemsworth), Captain America (Chris Evans), Iron Man (Robert Downey Jr.), Black Widow (Johansson), Hawkeye (Jeremy Renner), Hulk (three terabytes or so), and, hey, isn't that Jenny Agutter over there on that screen? There's some dialogue (unfortunately), some tense-like arguments, and some jokes about how even square Cap understands a reference to The Wizard of Oz, how insufferable Iron Man likes Point Break, and how mild-mannered Bruce Banner (Mark Ruffalo) just can't catch a break. There's no character development, in other words, with romance-like moments introduced and dropped with equal haste; the development of a civilized Hulk introduced and mysteriously fulfilled; and the introduction of Asgard into the "real" world introduced and...yeah, never mind. On the bright side, when it comes time to finally level Manhattan, The Avengers goes a long, long way to erasing memories of the near-identical destruction of Chicago in Transformers: Asshole.

Meanwhile, Jackson confirms that he's stopped trying, Whedon subsumes the things that made him irritating in favour of new things that make him anonymous, and best not to spend too much time wondering why it is first that it's an advantage to have a flying aircraft carrier, then why said carrier doesn't launch its arsenal against the alien threat. The Avengers doesn't make a lick of sense, in other words, and doesn't have to. It's a giant, bullying, bruising flex of brand and pop archetype. It doesn't miss the trick of a post-credits sequence setting up the beloved villain of the inevitable sequel--doesn't miss any tricks, in fact, en route to providing every single thing its intended audience wants (but not a damn thing more). It's pleasantly homoerotic, references the Holocaust in a random sequence, and offers absolutely no stakes or doubt in outcome in a film stocked full with indestructible superheroes. The Avengers, finally, has no inner life--there's nothing to explore here, except maybe the ways that men express their insecurities in the avatars they create, giving some good Freudian weight to a sequence where Hulk hunts Black Widow in the bowels of a flying ship. But whenever it threatens to be about something--like when Bryan Singer or Chris Nolan direct a superhero movie--Whedon reveals he lacks the confidence to be much more than the operator of the world's most expensive amusement park ride. Still, for the last hour or so, it's a great one.

I spent the whole second half waiting for Thor to power up Ironman with lightning like when they were dueling but it never happened :(