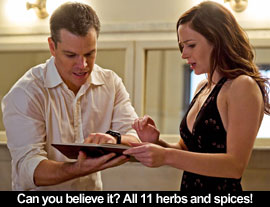 by Walter Chaw George Nolfi, writer of Ocean's Twelve, The Sentinel, The Bourne Ultimatum, and other movies I can't really remember if I've seen returns to his "Renaissance Fair: The Movie" (a.k.a. Timeline) roots with this howler of a hyphenate debut. Somehow mushing together the worst elements of bad films as disparate as The Box and Return to Me with an uncannily bad ear for dialogue and the instincts of a twelve-year-old Catechism student, The Adjustment Bureau jollily romps through Christian quandaries of predestination vs. free will by pitting fedora'd Wim Wenders angels against milquetoast Matt Damon and his badly-slumming object of desire Emily Blunt during their Satanic (I guess) quest to be married to each other. It doesn't take a stand one way or the other, having its host and eating it, too, all the way through to a genuinely stupid conclusion in which it's revealed that the almighty DIRECTOR is neither and both male and female and appears to all of us in His/Her own way. I suppose you could say that The Adjustment Bureau is a Wim Wenders movie if Wenders were a douchebag given to sackless pop-Christianity musings scored (by the up-and-down Thomas Newman) with what sounds like the music from Field of Dreams as performed by an orchestra of baby deer.

Our hero, David (Damon), is a Senate candidate undone by a mooning incident who meets-cute ballerina Elise (Blunt) in a men's room immediately before his Bulworth-like concession speech. Quickly separated, they meet-cute again three years later on public transit, with the life of a new Blackberry hanging in the balance (adorable! hip! product placement-y!). Soon David accidentally discovers that his life is being manipulated by the traveling "Mad Men" players, who freeze time, erase memories, "inception" close confederates, and apparently arrange appearances on "The Daily Show". (Sort of like that episode of the '80s revamp of "The Twilight Zone" where groups of jumpsuited goons built every single minute like stages on an endless cargo train called Time.) These goons, led by head goon Thompson (Terence Stamp), dress better and travel by means of special doors with their magic hats while operating at the beck of a faceless Director who passes down edicts through The Book that dictate the Fate of everyone on the planet--because, left to our own devices, all us humans were able to manage were The Dark Ages and, um, WWII and, uh, the Cuban Missle Crisis. Suggesting, of course, that everything bad in the world is created by not-God and everything good by God--suggesting again that there is an equal and equally-powerful counter-agent to God that was not created by God. And by God, what I meant is The Director. And by Satan, what I mean is the only black member (Anthony Mackie) of the "Adjustment Bureau" (which sounds like it should describe a group of guys who go around rearranging your junk)--the only one "courageous" enough to test the will of The Director.

Big, capitalized issues (Free Will, Predistination, the Source of Sin) are raised herein and left to founder with a giant shrug at the end--a sort of literal, do what you want to do, that's what He/She had planned from the start equivocation that wins no converts while losing the choir. The Adjustment Bureau is a big, dumb, awkward, bumbling mess of ill-formed arguments and a complete lack of courage. Compare it to works of genuine religious insanity like The Passion of the Christ and Salo for a quick gut-check of the difference between something that means what it says and doesn't give a fuck what you think about it and this weak sister of a flick that pisses on itself for fear of offending. Consider that David is as blank and uninterestingly good as Elise is pliant and inoffensively an object for David to fuck, make life-decisions for, and rescue--and how at the end, after all the gaping inconsistencies of having omniscient beings (ones capable of freezing time and spraining ankles) unable to run down David and Elise at full sprint, the best the film can offer is a Bagger Vance soliloquy about life being what you make it. Unable to make anything of its theology, in other words, The Adjustment Bureau also fails as a romance, thriller, sci-fi flick (based loosely on a short story by the fast-spinning Philip K. Dick), action film, and character drama. Nothing about it works; it would be offensive if it weren't so clearly an object better pitied or ignored. It's a conversation-starter for idiots, God bless 'em. Originally published: March 4, 2011.