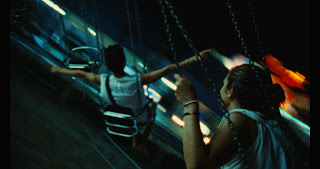 by Angelo Muredda Conceptually sandwiched somewhere between Maren Ade’s terrific Everyone Else and Terrence Malick’s Badlands, Alessandro Comodin’s Summerof Giacomo is a richly textured portrait of dumb love in the grass, times two. As the lengthy credits of electric blue font superimposed on black and scored to languid birdsong suggest, this is chiefly an aesthetic experience, and Comodin delivers a gorgeously lensed (on 16mm) account of twentyish Giacomo and Stefani’s wayward hike through the countryside in search of a river by which to set up camp for the afternoon. The press notes tell us that Stefani is a childhood friend, but that hardly matters: all that we gather and need to gather is that something might have happened at some point, but outside of this hike, it’s over. What we’re left with, then, apart from their pathfinding and inevitable squabble, is a dense sensory record of the seriously goofy and – this is nicely underplayed – deaf Giacomo’s experience. His cochlear implant is briefly glimpsed in the first over-the-shoulder shot of him clanging randomly at a drum set, and you could happily read the film as an experiment in attending to the sounds, both slight and explosive, that pass through the device en route to his dufus skull.

I don’t mean that as an insult. Looking like a wiry young Patrick Bauchau, Giacomo is an original. He’s all jackal screeches and nihilist exclamations (“lousy nature!”), and his 16-year belated glee over the Chemical Brothers’s “Setting Sun” is infectious, even though he’s a total cad. A last act reveal introduces a beautiful third player who pushes things even further into the territory of Rohmer’s moral tales, but not always productively; this doesn’t feel like a dramatic monologue sort of movie, and doubtless Giacomo wouldn’t want to hear it. Summer of Giacomo is at its most remarkable when it hews closely to its star, whether he’s seducing a girl with mud clods to the face or chanting “We Will Rock You” wildly off key, for ages. ***/****