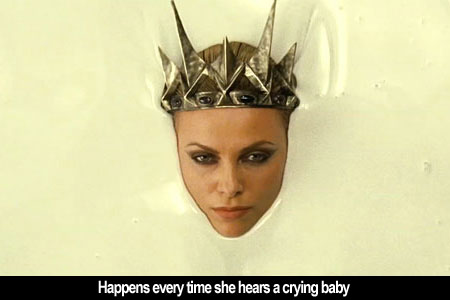 by Walter Chaw A handful of arresting images aside (and even those owe more than a passing debt to artist Bev Doolittle, or Terry Gilliam minus the tchotchkes--and here's Lily Cole again, post-Parnassus), Rupert Sanders's dreary Snow White and the Huntsman plods along without much sense on its way to producing not much with little impact and no purpose. Though beaten to it by Gary Oldman's legendary turn in the inexplicable Tiptoes, it has a gaggle of hale British actors playing dwarves, including a humiliated Bob Hoskins, tasked with being blind-guy exposition for little miss Joan of Arc. And it has a gorgeous Charlize Theron, demonstrating in full fetish-wear that she has no idea she's in a Twilight ripper by turning in a pretty good character performance as an evil step-witch who's spent way too much time reading The Beauty Myth. Indeed, the Big Bad Wolf in this fairytale is Naomi Wolf.

Ravenna (Theron), see, hates men because all men want is a pretty face and, worse, some men trade their wives in for younger models after they've given them the best years of their lives. That's not true of the Huntsman (Chris "Thor" Hemsworth, still dreamy), freshly-widowed and sent into the Dark Woods (puberty) to track down Snow White (Kristen Stewart) astride her white stallion (virginity), for Snow White is prettier than Ravenna (actually no, not by a long shot, but alas), thus threatening...um...I don't know. Something about eating hearts and drinking blood, but not in a Catholic way...well, sort of in a Catholic way, in that by eating Snow White's heart, Ravenna will achieve eternal life, which she explains by breathily intoning "Immortality, forever!" Yes, and for all time into eternity ever after. Snow White and the Huntsman is a movie specifically designed for Stephenie Meyer's audience of lonesome illiterates, hoping they'll rip their sweaty bug-eyes away from Fifty Shades of Grey long enough to feast on a circa-1995 feminist fairytale update (watch it on a double-feature with Drew Barrymore's Ever After), complete with a Fabio-tastic hero and an inexplicable Princess Mononoke interlude.

Stewart demonstrates that as an actress, she's pretty interesting installation art, a sucking hole and a blank projector screen at the same time--the Edie Sedgwick of Poor Little Rich Girl and Beauty #2, who might have had something going on somewhere in there, but mostly just stood around looking pretty like, say, a soup can, or a banana. I confess that whatever wavelength Stewart's appeal operates on is a pitch I can't hear, though I have complete confidence that her pale, buck-toothed, gape-mouthed Culkin vapidity is doing what it's supposed to in Snow White and the Huntsman. I'd like to think that Stewart is an active participant in her exploitation as the world's palest Rorschach blot, but I suspect she doesn't know that she's the heroine in romance-novel cover art: Doomed to be replaced by the reader's face in her mind, held in some brawny embrace.

The most successful parts of the film are the parts where commercial veteran Sanders is allowed to work his thirty-second magic: that first entry into the hallucinogenic wood, that bit ripped off from Hellraiser where Ravenna drags herself out of a black puddle. Meanwhile, any monologue by Ray Winstone, dwarf or not at the moment, is a good monologue (same goes for Ian McShane, who's earned the benefit of the doubt into eternity for "Deadwood"); there's some admirable audacity in a loving standoff between girly and troll that pays homage to Alien: Resurrection; the random launching of a few trebuchets is bettered only by Luc Besson's unfairly derided The Messenger; and I did love that for all the talk of man's inhumanity to woman, at the end of the day the young one wins by stabbing the old one in her pumper. Girl fights in bustiers and corsets. That's the kind of feminism I can really get behind.

I love what you said about Kristin's performance. I kept thinking CLOSE your mouth, your teeth are like white beacons distracting me from the movie! I'm sure she has potential but Twilight has ruined her acting in this film. I think it wouldn't have been as noticeable if Charlize wasn't as complex of a character and as good at it.