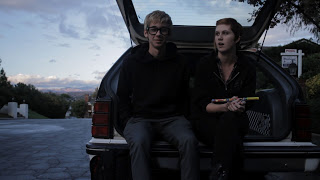 by Angelo Muredda Like a delicate magic trick, Only the Youngis best watched in a state of rapt fascination. An unostentatious feature debut from Elizabeth Mims and Jason Tippet, the film chronicles a few months in the lives of three impossibly sweet teens in a desert town. Impressively, it does so without signposting major events along the way. Instead, we weave through their relationship and family dramas with only their changing hairstyles as obvious chronological markers, catching everyday lyricism in first car rides and teen girls’ catlike head nudges.

On paper it isn’t much: lanky Garrison and skittish Kevin have been best friends for years, and continue to be despite the impending threat of graduation and the complication of Skye, Garrison’s on-again off-again girlfriend and Kevin’s sublimated crush. That’s about it for narrative, though plenty comes out incidentally in their relaxed conversations. Garrison and Skye’s courtship is entangled, as these things tend to be, in a host of issues bigger than the couple, including an unexpected development in her living situation and, more importantly, his immaturity as a teen boy drawn to girls outside of his immediate frame of reference. Taking for granted the wholesome friend next door, Garrison briefly dates Kristen, another nice girl who Skye, in her best but still unconvincing impression of a mean person, calls “A hip hop dancing liberal. And short.” That all three subjects happen to be evangelical Christians is a bit startling at first, but Mims and Tippet take their faith seriously. Garrison and Skye banter about marriage, of all things, like reincarnated old souls; their earnestness is something we don’t see enough of in movies about teens. That’s not to say that Only the Young goes down like medicine: it’s above all a beautiful film, formally translating the wooziness of these kids’ sun-kissed days into graceful footage of their bodies gliding through abandoned skate parks like gangly Adonises. Children are the gods of this city, as Garrison half-jokingly announces over the opening credits, but Only the Young reassures us that they’re benevolent rulers. ***1/2/****