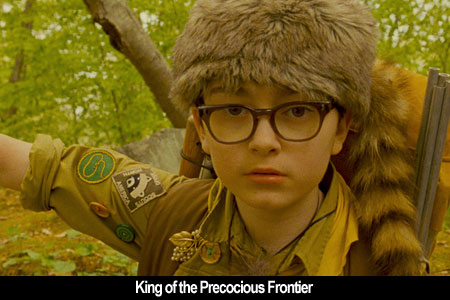 by Angelo Muredda In his post-mortem of the 65th Cannes Film Festival, over which he presided as jury president, Nanni Moretti complained that a number of Competition filmmakers seemed "more in love with their style than with their characters." Whether Moretti had festival opener and Competition entry Moonrise Kingdom in mind is debatable, but this is the kind of criticism Wes Anderson has faced throughout his career. Moonrise Kingdom won't win many holdouts over to Anderson's corner: Those who think he's spent the last 16 years building dollhouses may snicker from the first sequence, where the camera laterally tracks through an actual dollhouse of a set to find a mid-1960s family sequestered in tiny rooms, parsing their magazines and adventure novels. Those baffled by The Darjeeling Limited's juxtaposition of Kinks songs with snippets of Merchant-Ivory and Satyajit Ray scores may also scoff as the camera tracks past a battery-operated record player pushing out Benjamin Britten's "The Young Person's Guide to the Orchestra," an educational piece narrated by a disembodied voice that neatly introduces "all the separate parts of the orchestra." As if to facilitate a no-hard-feelings exit for the unenthused, Anderson telegraphs his aesthetic from the overture.

Yet there's more to this opening salvo than a laying out of the ground rules. More than any of Anderson's previous films, this is an inviting project--elegantly directed, and graceful in its marriage of style with the humanist characterizations Moretti ostensibly craved. If the staggered introduction to the woodwinds, brass, string, and percussion of this family feels like a callback to the storybook tableaux that cue up the cast in The Royal Tenenbaums, the line that follows--"After this, you will hear the whole orchestra"--suggests something new. Moonrise Kingdom makes good on that cheeky promise. In concert with the Britten numbers woven throughout the soundtrack, the film offers itself up as a children's fugue, where the opening exposition is beautifully developed and tenderly recapitulated in the director's most mature coda to date.

Familiar as Anderson's aesthetic is, then, there's a structural sophistication to Moonrise Kingdom that sets it apart. While I've long appreciated the steeliness behind Anderson's whimsy in even lesser films like The Life Aquatic, the top-heaviness of the character design sometimes leaves me cold: You look at uniformed Steve Zissou as he tells you about his boat and sense that all you'll ever know about him is right in front of you. Moonrise Kingdom acknowledges and even subtly critiques this over-determination. The first set we see is a converted lighthouse, the home of 12-year-old Suzy Bishop (Kara Hayward), who by the end of the main titles yearningly looks out a pair of binoculars, away from this place and into a field. We don't know it yet, but she's scanning for Sam (Jared Gilman), who in the next fastidiously-mapped sequence--which rhymes Camp Ivanhoe with Suzy's home--is revealed to be an escaped Khaki Scout of Troop 55. An innocent outlaw-type along the lines of Owen Wilson's Dignan in Bottle Rocket, Sam doesn't turn up until sometime later, once Suzy wanders into that meadow, as they've arranged via a series of letters exchanged over the past year. Those missives, which we hear for the first time later still--a narrative quirk Anderson attributes to co-screenwriter Roman Coppola--form the spine of a lyrical flashback that lets the protagonists reveal themselves in their own fleeting words. Until then, Sam's an absent lead.

Though it might seem at odds with the orchestral motif that figures Suzy and Sam as instruments waiting to play their part, this deferral of their meeting gives the film a welcome improvisatory spirit in its most important section, which details their coupling away from families biological and surrogate. The leads aren't part of the orchestra, we gather, until they bust out of their respective dollhouses and trade the identity markers those spaces (and their director) impose on them for something like a natural state out in the open. In Suzy's case, that means packing her best vintage dresses and hitting reset on the violent behaviour that landed a copy of Coping with the Very Troubled Child above her parents' refrigerator. For Sam, an orphan and state ward, it's a matter of shedding the foster home system's assessment of him as "emotionally disturbed" and channelling his scout training into a performance of woodsman bravado that's just good enough to convince his partner.

It's touching that instead of wildly reinventing themselves, both children simply upgrade their prosaic identities on the fictional island of New Penzance. Suzy has thought to bring provisions for the kitten she's smuggled along; she's even left a thoughtful note for her brother in place of the record player she's lifted, promising its safe return within ten days. Her pragmatism is vintage Anderson, but without the archness we've come to expect from, say, Max Fischer penciling in Margaret Yang's audition time. Instead, we get the sense that Suzy is gamely trying on adult mores in what should be a judgment-free space, which is why Sam laughing when she mentions the parenting book stings. (And also why his apology, "I'm on your side," feels like more than just warmed-over James Dean.) Away from everyone who supposedly knows them best, they rechristen the cove they settle at--a set of coordinates in what narrator Bob Balaban tells us is Chickasaw territory--"Moonrise Kingdom," a name that resonates as both a secret between conspirators and a young adult's dicey colonialist fantasy, straight out of one of Suzy's adventure books.

Anderson is fond of matching such precocious children with regressed adults, but for the first two thirds, he keeps an arm's length between these camps. In their private kingdom, the kids dance to Suzy's Françoise Hardy records in a sun-kissed sequence that DP Robert Yeoman, delivering his best in grainy Super16, shoots like woozy outtakes from Pierrot le fou. (Another touchstone is Badlands, especially Martin Sheen and Sissy Spacek's impromptu dance to Mickey & Sylvia's "Love is Strange.") There's a primal spirit to their honeymoon--Sam pierces her ear with a fish hook before she tells him to "do the other one"--that throws into dull relief the sexual stagnation of the guardians who want to pull them back to reality, especially Scout Master Ward (Edward Norton), a math teacher whose devotion to the troop suggests he's taken an ascetic's oath as far back as when he was Sam's age. Suzy's parents, underplayed by Bill Murray and Frances McDormand, are equally stalled, notwithstanding McDormand's tryst with the island's lone police officer, Captain Sharp (Bruce Willis). There's a lovely moment where Willis, who gets the usual Murray role of the wistful sadsack, communes with a dispirited Sam over his own losses: Better for a smart kid to pursue love with reckless abandon, he agrees, but, "Even smart kids stick their finger in an electrical socket sometimes."

That warning signals a closing act that gathers adults and children alike--all seeking refuge from a storm--for the promised orchestral finale, set in the same church where Sam first spotted Suzy in a production of Britten's Noye's Fludde. Even with Tilda Swinton as an electric blue-draped bureaucrat named Social Services, this section flags under its noisy pyrotechnics. But it does so necessarily. All that Sturm und Drang melts away before the delicate final shot, in which Anderson surrenders his usual slow-motion procession to hone in on a detail from a lost place that's already slipped out of reality and into memory.