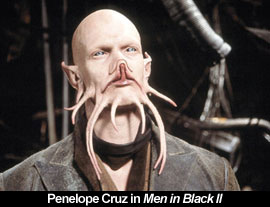 by Walter Chaw Coming in at just shy of eighty-five minutes, Barry Sonnenfeld's Men in Black II is that breed of value-free summer entertainment--call it the "lacklustre blockbuster"--that gives mainstream movies a bad name. It's all first act and no second or third, meaning everything that happens in the film would function as the set-up in a real film (see also: all of 'Episodes' 1 and 2), and that its primary purpose is to act the whorish shill for product placement--never does the silver screen so resemble a bulletin board as when this variety of film drags itself into the googolplex. Special effects are asked to behave like character, motivation, and narrative while the actors paid exorbitant amounts to caper by themselves before a blue screen do their best not to cackle like Snidely Whiplash making off with burlap bags that have dollar signs painted on them. The audience is the damsel in distress in this flickering melodrama, tied to the railroad tracks as a great lumbering behemoth barrels down, the engineer asleep at the rudder.

Agent Jay (Will Smith--yes, the names are spelled out in the credits) is really sick of his job as a "man in black," defender of Earth against "the scum of the universe," and his malaise evidences itself in every yawning lope and slack line delivery. Smith has never looked so bored and I've never been so bored watching him. Agent Kay (Tommy Lee Jones, taking a page from the Anthony Hopkins book of selling one's soul), having had his memory wiped in the previous film, acts as the postmaster in a rural Massachusetts town. When evil snake-ball Serleena (Lara Flynn Boyle) lands on our planet and takes on the shape of a Victoria's Secret lingerie model, Agent Jay, at the urging of Agent Zed (Rip Torn), finds Agent Kay because Agent Kay is the only person who knows how to stop Serleena. Lovely Rosario Dawson cameos as the main motivating character in this drama, a girl named Rita with the thankless job of trying to make us forget that Linda Fiorentino--who really needs the work--declined the invitation to return for this sequel.

In Men in Black II, the action sequences are stunningly boring and the gags are punchless and dated. What was funny in the first film (the revelation that folks like Sylvester Stallone are aliens) is old in the second (Michael Jackson and Martha Stewart are aliens, duh); what was funny the first time in Airplane! (the inflatable auto-pilot) is just a peculiarly bit of recycled material here. Men in Black II is absent of imagination and life, ripping off stuff from Beetlejuice, Toy Story, The Jewel of the Nile, and the aforementioned Airplane! (a Peter Graves cameo gets a laugh just because of his association with a funnier movie) with a kind of casual stupidity that isn't quite terminal until Sonnenfeld and company decide that Bill Cosby's smug mugging is the best way to find a laugh in a script (by the brain trust of Robert Gordon and Barry Fanaro) too busy self-immolating to entertain.

The plotholes are alarming (Kay, after his memories are restored, goes on a quest to find his missing memories; four alien nightcrawlers are instructed to turn off the power in a complex for no reason and are then chastised for doing so; Rita somehow winds up with pivotal bits of the film's puzzle for no purpose other than expediency of plot), the mayhem and the CGI stupendously inept. Most egregious, however, are the multiple endings, which begin with venerable Torn doing a bit of slapstick more humiliating than his mooning scene in Freddy Got Fingered and finish with a ton of false climaxes that are totally meaningless because there are no rules established for the vanquishing of the beast. In the great tradition of Jaws: The Revenge, Men in Black II is one of those sham constructs that relies on our indefatigable appetite for a monster that despite having been blown into smithereens a few dozen times somehow returns for one last glorified screensaver.

The problems with Men in Black II are myriad, but they can be encapsulated by the not-real-shocking revelation that the picture is all about the Benjamins. It's a moneymaking machine, pure and simple, poised to make a quick score on the lucrative Fourth of July weekend (marking Smith's fourth such cash grab after Independence Day, Men in Black, and Wild Wild West) before audiences drawn by their affection for the film's fitfully clever predecessor discover that this follow-up is destined to rank amongst the worst sequels ever made. It is an enterprise without honour, in other words--one that leaves a bad taste in one's mouth for Smith's and Jones's greed and the imbecilic filmmakers who, even with five years and more advantages than perhaps anybody in the history of the medium, can't manage a story with a beginning, a middle, and an end. If we don't demand a standard of quality for the art that we choose, we deserve the trash that we get. If culture's lemming-pressure compels you to see it this weekend despite that nagging suspicion in your gut that Men in Black II stinks, buy a ticket for The Bourne Identity instead. Originally published: July 4, 2002.