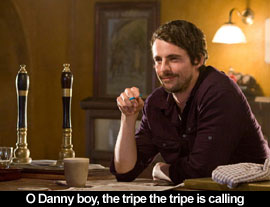 by Walter Chaw A rite of passage for starlets aspiring to graduate from the B-list is this crucible of the romantic comedy where, governed by the suffocating strictures of a time-worn formula, the penitent are asked to prove their box-office appeal. See, the genre represents the only variable, however slight, in what shakes out to be something like the Royal Shakespeare Company's tradition of cycling Hamlets. Already through the corny gates, I imagine poor Amy Adams (remember when she used to be better than this?) welcomed into the fold by the unholy Moirae of Sandra Bullock, Renée Zellweger, and Julia Roberts as she teams with Limey Matthew Goode in a babysitter's club-safe series of delightful misunderstandings on the Emerald Isle. Adams, an exceedingly promising American actress as evidenced by turns in Catch Me If You Can, Junebug, and Doubt, demeans herself now in picaresque cash grab Leap Year when her Anna, wanting to be betrothed to douchebag cardiologist Jeremy (Adam Scott), is pushed into the brawny arms of bog-trotting Declan (Goode) in a happy-go-smacky Forces of Nature imbroglio. Seems Anna wants to propose to the reluctant Jeremy in Dublin, where, once every four years, local tradition allows the especially desperate to Sadie Hawkins their cold-footed beaus. But, uh oh, type-A Anna is forced to hire slovenly man of stinky action Declan to ferry her 'cross the proverbial Mersey and, in the process, learn something about herself while teaching him something about himself. Slapstick, interrupted kisses, awkward sleeping conditions, a dancing-at-the-wedding sequence, a food-prep montage, and provincial bumpkin comedy ensues.

It's not quite as odious as most of the Bullock/Roberts/Hudson/Zellweger/Witherspoon pantheon, but it's also only as lively as a weeks-dead marmot. Consider that the height of comedy in this corpse is a pair of Waking Ned Devine irregulars who argue in their village-drunk way over superstitions about days of the week. So central are they to the proceedings that director Anand Tucker (who never misses a chance to let his camera bloom and perform the beloved slow push-in) devotes minutes on end to their exhausted, prehistoric Seamus n' Andy shtick. A certain variety of elders-ploitation and even paternal racism, not only does the punchline belong to them, but the migraine-inducing question of why it is that these two should be standing alongside our swooning heroes on the Cliffs of Mohr haunts one into the small hours. Never mind, as Anna and Declan meet-cute in Declan's little pub-cum-hotel-cum-five-star-restaurant, the place quivering under the axe of the evil bank-man so that Anna's obvious money (she has a Louis Vuitton bag--what a princess!) is the only excuse Declan needs to take her in his beat-up jalopy on their scenic road trip to destiny and Dublin. Along the way: a little Rick Steves local flavour; a castle and a romantic tale; a fortuitous rainstorm; a horny old Italian couple; and more adorable Euro-local stereotypes than the casting call for extras in "The Slaughtered Lamb," though curiously there are no sheep in this tale of the Irish countryside. Declan beats up some local toughs to distinguish himself as the Alpha to Jeremy's Omega, cooks to show he has a tender inside, and reveals his own hidden anguish to demonstrate to the target demographic of soft-in-the-middle forty-something hausfrauen that he's a project. Anna, for her part, reveals that she, too, had a childhood of disappointment, with John Lithgow's eye-blink cameo as her exuberant daddy the only thing worth much of a shit in this thing--meaning that we feel kind of protective of him when she slags him.

Leap Year is tedious stuff: instantly forgettable and extraordinary in its complete disinterest in being distinct in any way. It's all been done before and better in lists and lists of movies that every single person watching the blighted thing can name as it unfolds, suggesting to me that the only appeal of films like this, popping up as they do three or four times a year, is the cozy, post-mod fugue state they create in their audience. It's like a bowl of oatmeal. Leap Year is terrified to offend in any way, jettisoning set-ups for jokes and perverse situations in favour of moonlit beaches and every familiar situation from every identical romcom, lobbing them across the plate and into the mitt without anything resembling a swing. (Most insulting are the various ways the picture avoids sex (including having oft-humiliated Anna puke on Declan's shoes, aye) while justifying infidelity.) The best that could be said about the film, in fact, is that it's so inert it slips into forgetfulness with nary a ripple. It's not worth defending and, as such, not worth attacking. Truth of it is, I debated a long time whether to even bother reviewing it, which is my way of saying, if you see it, you're exactly the type of person who would. Originally published: January 8, 2010.