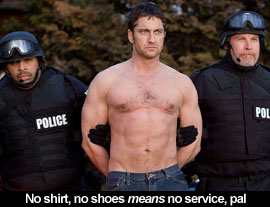 by Ian Pugh SPOILER WARNING IN EFFECT. The most that can be said for Law Abiding Citizen is that it understands the dichotomy of Gerard Butler, the Scottish beefcake whose schizoid career has him playing a screaming grunt one month and a kindly, rough-around-the-edges dad/love interest the next. After murdering a notable percentage of Philadelphia's legal system, Butler's black-ops such-and-such Clyde Shelton warns that, if he is not immediately released with all charges against him dropped, he will "KILL. EVERYONE." Coming from a character who is initially introduced to us as Joe Average, that priceless bit of leaden melodrama almost single-handedly consigns Law Abiding Citizen to the "camp" drawer--but, improbably, it's also an uncomfortable moment that perfectly captures Butler's nebulous, malleable status as a movie star. The dumb joke/terrifying conjecture being that, with 300 still lingering in the air, you have no idea how far he'll go in "killing everyone." Is it a coincidence that the film should give Clyde comic-book disguises with which to evade capture and lure his prey? Of course not, because Butler belongs in a comic book. It's not just his cold stare or his steel jaw, it's the fact that, at the mercy of practically any working writer, he can represent anything or anyone, villain or hero, with preposterous ease. This time, he's concocting bloody, convoluted vengeance against the men who destroyed his family and the system that doled out questionable justice--and in so doing, he becomes an amalgam of the Joker, the Riddler, and the Abominable Dr. Phibes.

For that alone, Law Abiding Citizen would make a fine companion piece to Surrogates, considering how well that film understood Bruce Willis (in many ways Butler's prototype). Unfortunately, it lacks the accidental poetry of that little zeitgeist-in-a-bottle, merely shoving Fracture's battle of legal wits into a blender with eight or nine other movies concerned with the moral quandaries of going Bernhard Goetz on society's undesirables. Desperate to maintain his high conviction rate, hotshot attorney Nick Rice (Jamie Foxx) cuts a deal with the criminals who murdered Clyde's wife and child. Ten years' worth of bitterness and judicial education later, Clyde manages to torment and kill the killers--an act he broadcasts with enough arrogant pride to land him a quick trip to prison. Finally granted license to manipulate the law to his own favour, Clyde leaves vague clues and ultimata that lead Nick to discover the nasty death traps he's devised for the lawyers and judges who failed to live up to his standards. Nearly all of this was done before in one way or another, but that doesn't mean the film can't lift ideas and set-pieces wholesale from Death Wish, Death Sentence, Se7en, at least five episodes of "CSI", and three or four of the Dirty Harry films. It even comes complete with The Dead Pool's remote-controlled killing machines! Trade the R/C bombs for EMPs attached to assault rifles--it doesn't matter, the principle is the same.

That mentality is precisely why the film degenerates into the worst kind of guessing game. Because this genre has been pounded into the ground with varying degrees of success, director F. Gary Gray feels justified in going through the motions and delivering everything expected of him. Any and all questions about the rationality of vigilantism in a world of questionable justice are abandoned because several decades' worth of similar plots have already cemented your perception of the concept, and no degree of exaggeration is going to change your mind now. What's left is trying to determine whom Clyde will kidnap next and in what grisly fashion he plans to off them. (There's another source from which Law Abiding Citizen liberally steals: there are more than a few stretches that resemble toned-down torture porn. While the same could be said for a lot of these "legal outrage" action/thrillers, is it a coincidence that this one arrives a week before Saw VI?) The only point where that emptiness actually pays off, in fact, comes in trying to determine the origin of this whole mad cycle. When it's revealed that Clyde's tactical brilliance traces back to some rather shady government work, it inspires a re-evaluation of everything that's happened up 'til then. "You can't fight fate," one of his assailants tells him before laying waste to his domestic paradise. So why was Clyde left alive? What violent ghost from his past, what unimaginable debt, could have prompted this massacre? The particulars of the assault on Clyde himself and its aftermath are wisely left unanswered, but then a less abstract form of villainy takes the reins, and the potential for intrigue dies. Indeed, Law Abiding Citizen wants to talk tough about moral and judicial grey areas (the title itself is a pretty heavy dose of irony, no?), but its deepest philosophy is that jerry-rigging a cell phone to explode someone's brain might be taking vengeance a bit too far.

That's the real downside to treating Butler like a comic-book character, especially given Hollywood's traditionally bleak view of comic books: the attempts to delve into moral uncertainty are so grossly over-the-top that the film only ever offers a choice between 'good' and 'evil.' As such, you simply can't discuss Foxx's good guy, or the actor's phoned-in performance, at length. The film is ostensibly about Nick learning to better appreciate a true notion of justice, yet there's nothing to distinguish him from a thousand other likeminded characters. It's the sort of role Kevin Costner would have played ten, fifteen years ago--the only real question of his heroism arises from the suspicion that no one could possibly be this selfless and stalwart. Dig deeper, though, and you'll discover that he's selfless and stalwart without fail. (Even the question of whether Nick is a negligent family man is brushed aside when the killing starts, as his own wife and child are relegated to the background as vague, faraway motivators for his actions.) Nothing ventured, nothing gained. Law Abiding Citizen is proudly perfunctory; that it should more or less encourage you to applaud its worthlessness should hardly be considered a step forward for a tired genre. October 21, 2009.