**/****
screenplay by Jesica Yu, based on the book The Ripple Effect: The Fate of Fresh Water in the Twenty-First Century by Alex Prud'homme
directed by Jessica Yu 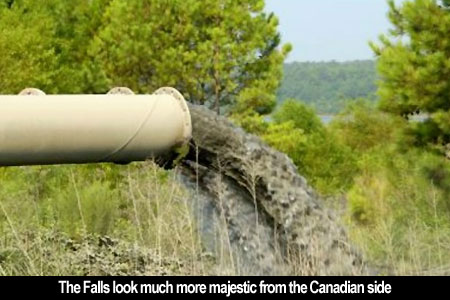 by Angelo Muredda Last Call at the Oasis is the latest casualty of Michael Moore's success. Like virtually every other North American informational doc with an activist slant since Moore's Bowling for Columbine, Jessica Yu's film tackles a serious issue--unequal access to the world's dangerously finite freshwater supply--with a barrage of animated charts, righteous talking-head interviews, ironically spliced music cues (Johnny Cash's cover of Bob Nolan's "Cool Water," Pink's "Raise Your Glass"), and archival footage from less enlightened educational fare, in this case 1948's "The Adventures of Junior Raindrop." Besides having an obvious facility with these tropes, Yu has her heart in the right place; as with Participant Media's other non-fiction efforts (among them, An Inconvenient Truth and Waiting for "Superman"), with which this film shares its DNA, the politics are sound, landing firmly on the side of the disenfranchised and the weak, in hopes of bringing attention to what might otherwise be a lost cause. But there comes a point where the deluge of aesthetic shortcuts overwhelms the message, and makes the good work these movies are striving to do seem hopelessly routine.

Based in part on Alex Prud'homme's The Ripple Effect, the film addresses the freshwater crisis from a number of geographic and economic vantage points while generally grounding itself in North America. Yu relies heavily on the work of environmental activist and legal clerk Erin Brockovich, who since Steven Soderbergh's eponymous biopic has become a kind of one-woman stand-in for the weak-kneed EPA whenever questions of contaminated water in underprivileged communities come up. In an usual choice, quite a bit of footage from that film resurfaces as a supplement for the work Brockovich currently does in fighting the presence of hexavalent chromium (it's sort of assumed that we remember Julia Roberts's explanation) in tap water. Despite her Hollywood clout and clear expertise in grassroots organizing, Brockovich is one of the least compelling subjects, insofar as her story feels cribbed from that other, better-known text. Things pick up in the presence of more straight-shooting experts like scientist Jay Famiglietti, who we see giving specialized testimony on the California water shortage before a terser one-on-one interview that ends in, "We're screwed, yeah."

That line has a punch the rest of Last Call at the Oasis sorely lacks, with the doc eventually morphing into a light-hearted jab at the bottled-water industry. Paul Rozin, an academic who appears to specialize in the psychology of revulsion, takes the reins for much of this section, making glib but reasonably funny comments about how selling recycled water (read: processed sewage water) to the masses is analogous to persuading people to wear Hitler's sweater. "We live by necessity in a contaminated world," he announces, which Yu hits firmly on the nose by cutting to shots of a dog licking his owner's nose and a gym rat sweating onto a machine that the next guy happily parks his body at. We're all connected, see?

Presentation aside, Rozin's point is a fair assessment bound up in a potent corporeal metaphor. Certainly, it evokes the global criss-crosses involved in water distribution and consumption more elegantly than the abrupt trip to Australia we also get. Yet this is a film that wouldn't know contaminated if it spit in its mouth; it's hard to make such a smart, loosey-goosey argument within the confines of post-Moore info-doc formalism--an antiseptic genre if ever there was one. It would be remiss of me to suggest Yu doesn't give a damn: she isn't simply indulging her sentimental side when she captures a pair of girls in a cancer-ridden community riding their bikes in slow-motion. There are actual stakes here, albeit invisible ones in some cases, hidden until the next generation inherits either the droughts or the mystery illnesses wrought by present-day callousness. But while the converted will find their outrage confirmed and fundraising initiatives will have their post-dinner screening, for everyone else, Last Call at the Oasis may register only as another savvy exercise in issue-based liberal filmmaking.

Last Call at the Oasis starts its Toronto run at the Bloor Hot Docs Cinema on Friday, May 24th.