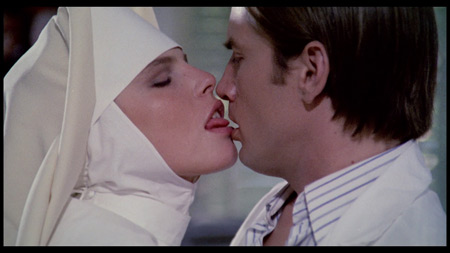 by Bryant Frazer It sounds like a grand old time, all right. First, there's that title. Killer Nun. Adjective noun, conveying irony and promising subversion. Then there's the cast. How can you not want to see Anita Ekberg star with Joe Dallesandro in a killer-nun movie? And the premise (dope-addled sister at a convent hospital starts abusing patients) does not disappoint--imagine a season of "Nurse Jackie" under showrunners Dario Argento and Abel Ferrara. Yet somehow, director Giulio Berruti blows it: A derivative slasher pic and an only mildly lascivious sex film, Killer Nun is the sort of sleepy-eyed misfire that could give nunsploitation a bad name.

Ah, nunsploitation! Typically, nunsploitation films were period pieces that depicted an isolated group of women of religious devotion, sheltered and supposedly celibate, who are nonetheless driven to extremes by their oppressive surroundings. WIKIPEDIA traces the genre to as far back as the Polish film Mother Joan of the Angels, but it has clear roots in the masterful Black Narcissus by Powell and Pressburger, as well as the devilish silent movie Häxan, which contains a sequence set in a convent. Still, the real granddaddy of nunsploitation is Ken Russell's amazing The Devils (based in part on the same historical incident of supposed demonic possession that inspired Mother Joan...), one of the greatest--and, not coincidentally, most perverse--films ever made on the subject of religious repression and persecution.

Killer Nun lacks that kind of gravity, but it does trot out an eye-rolling Mother Superior (Alida Valli), whose slow reaction to the crisis at the convent hospital under her watch reads as an opportunistic critique of a system that fails to humanely treat addiction and mental illness. "Sister Gertrude," she says, casually popping a pill while denying Gertrude's increasingly desperate requests for hospitalization, "it is a nun's vocation to suffer."

Addicted to morphine and suffering from blackouts following her recovery from brain surgery, Ekberg's Sister Gertrude becomes a hypochondriac, a nymphomaniac, and a sadist. She mistakenly believes that the tumour plucked from her head was cancerous, in spite of her doctor's insistence to the contrary. Fairly early on, she loses it at the dinner table in impeccably campy fashion, snatching a geriatric female patient's dentures out of a glass of water and smashing them to tiny, toothy bits with her foot. The old woman suffers a fatal heart attack soon after, and although the film draws a straight line from Gertrude's behaviour to the woman's death, none of Gertrude's co-workers are prepared to do the same--save sweet Sister Mathieu (Paola Morra), who declares her love to Gertrude, no matter what.

Ekberg is, I think, pretty good as this stuff goes. She portrays the nun more like a steely headmaster presiding over a student body than like a nurse dealing with patients. She has to play hysterical, too, collapsing and writhing on the floor in a drug-induced stupor, weeping as she watches an elderly man in a wheelchair enjoy a blow job in the rain, and throwing herself against the walls of a hospital hallway, crying out repeatedly, "I am not a murderer!" Morra, meanwhile, is resplendent in a body seemingly made for Eurocult frivolity. Her two nude scenes with Ekberg (who remains mostly covered) aren't especially sexy, though the second one gets a weird charge from Gertrude's demands that she a) put on silk stockings, and b) call herself a dirty little prostitute. Lesbian action is, alas, absent, though Morra's final-reel come-on to Dallesandro's Dr. Roland is genuinely erotic--largely because she commits to the requisite dont-you-want-me-baby shtick in full religious habit, which is kind of the point of this particular fetish. I'd like to see her in a movie that's less serious about itself than this one.

More intriguing is an amazing sequence about a third of the way into Killer Nun. Berruti has Gertrude experience a series of feverish visions involving a hospital patient, a corpse in a morgue, and her own bloody brain, visible through the hole in her skull during surgery. The shots are carefully- planned and timed, with matched cuts between dream and reality suggesting confusion and disorientation. What's more, the startlingly contemporary music cue underneath this sequence, composed by Alessandro Alessandoni, is perhaps the film's single most distinguishing feature. (Alessandoni is best-known to movie buffs as the musician who performed the twangy guitar part on Morricone's main title for The Good, the Bad and the Ugly.) The same gimmick becomes a little tired later on, when Berruti intercuts a prickly murder with a dull conversation between Roland and a hospital administrator, only drawing attention to the now-crushing banality of the film's storyline, but this scene by itself is almost worth the price of admission.

Killer Nun is a reasonably compact 88 minutes, but it feels longer, especially in an increasingly distended second half that introduces new major characters to an already busy mix. (Sometimes it feels like Berruti's actively padding the runtime, with redundant edits extending some scenes to the breaking point; I'm guessing there wasn't much footage left on the cutting-room floor.) Berruti seems to be on the fence about whether he's directing a full-on exploitation flick, and maybe he thought that careful attention paid to Gertrude's helpless descent into madness would make up for a more generic approach to matters of sex and death. A twist ending brings the movie in line with the popular Italian thrillers of the 1970s, but Berruti doesn't have the heart for the spectacular cruelty in which his compatriots specialized. Despite weak echoes of both Argento and Fulci, the bloodletting is executed without much conviction or imagination. Frankly, death-by-cotton-ball (the fate of that poor chap in the wheelchair) is never going to pass muster in the Giallo Hall of Fame. It may be wrong to pile on a director for not being crass enough, but face it--this ain't Fellini. With a title like Killer Nun, crass is what you're selling. 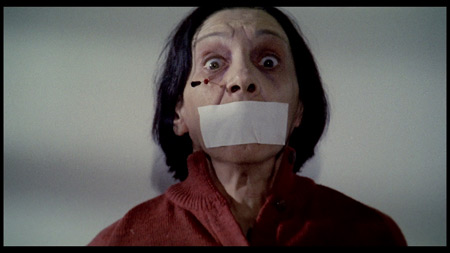 THE BLU-RAY DISC
While connoisseurs will differ on the value of Killer Nun related to its Eurocult brethren, most of them will be happy with the usual Blue Underground Blu-ray presentation. I dont want to belabour the issue, but the grain/noise situation is in the same ballpark as the company's other releases of similar vintage. (A patina of grain is clearly visible even when the picture dips to black.) Users with bigger screens and/or larger viewing angles may find this to be nettlesome, but from a more typical viewing distance it's not a huge bother. The picture is perhaps a mite soft but almost entirely clean, while the film blemishes that are apparent when scrutinized on a frame-by-frame basis suggest that a noise-reduction pass has cleared the lion's share of dirt and scratches.

The 1080p transfer was encoded using AVC and is slightly windowboxed to exactly 1.85:1. Average bitrate is just shy of 31 Mbps, and I didnt notice any compression artifacts under normal viewing conditions. The image is occasionally a mite jittery and goes briefly wobbly in a couple of shots, probably the result of damage to the original camera negative--the source for this transfer, according to Blue Underground.

Audio comes in twin DTS-HD MA tracks for English and Italian listening, both of them split across the left and right front channels. Although the English-language dub isn't so bad, the track is much brighter than the Italian version, with a higher noise floor and less low end. By contrast, the Italian track is significantly cleaner and the bass elements of Alessandoni's score land with a much more satisfying thump. Subtitles are keyed to the audio tracks, the main subtitle stream providing a SDH transcription of the English dub and the "English for Italian" subtitles generally more closely reflecting the Italian dialogue. French and Spanish subs are here, too.

Also on board the disc is "From the Secret Files of the Vatican", a 14-minute talking-head interview (in standard-def) with Berruti, who discusses the concept for the film (snatched from a newspaper headline about a Belgian nun who worked in a nursing home with an unusually high mortality rate) and notes correctly that the not-really-a-lesbian-scene lesbian scene "didnt cross the line," ascribing his decision to soft-pedal the sex to his respect for Ekberg. He complains about edits that were forced on the picture by its distributor, ruining some parallels he intended to draw between sacred Catholic rites and Gertrude's own drug rituals, and blames the casting of Morra on his producer. ("I couldnt say no in the face of his tears.") The title of this featurette is tongue-in-cheek: it refers to the director's discomfort with marketing tactics designed to make the film more notorious than he would have liked. The slim helping of extras additionally includes Killer Nun's spoiler-filled U.S. trailer (3 mins., 1080p HD).

Just wondering where the New Releases section of the website can be found now?