by Bill Chambers SPOILER WARNING IN EFFECT. Arriving on DVD with its cult status in the bag, Hard Candy was inspired by a Japanese crimewave that found underage girls posing as prostitutes to bait wealthy businessmen they subsequently drugged, robbed, and in some cases tortured. I think I'd rather see that movie--in dealing more with entrapment than with vigilantism, it probably wouldn't want for integrity like this one does. Hard Candy pulls its punches too often for its own good (mainly, it would appear, in the interest of sustaining momentum, pendulum-like), and its literalmindedness only makes things worse. The picture's chiaroscuro tableaux brazenly paraphrase Edward Hopper, for instance, and lest there be any doubt about artistic intentionality, the two lost souls at the centre of this chamber piece arrange to meet at Nighthawks Diner. But then a T-shirt with Hopper's seminal "Nighthawks" silkscreened onto it turns up as part of the narrative, which is overkill and self-defeating besides, as in reducing Hopper to a decal, Hard Candy itself becomes kitsch.

Alas, highly-topical, overly-equivocating pseudo-satires are a little played-out. Not that Hard Candy is a snark-fest like Saved! or Pumpkin, but in its reliance on the deus ex machina, grotesque caricatures (see: Sandra Oh's soccer mom), and teenage ego-stroking, it's comparably puerile. In Hard Candy, an online flirtation between 14-year-old Hayley (Ellen Page, capturing a bit of Maria Falconetti in her close-ups), a.k.a. Thonggrrrl114, and thirtysomething shutterbug Jeff (Patrick Wilson), a.k.a. Lensman319, culminates in a rendezvous at Jeff's sanctuary, an Art Deco bungalow where he photographs--and maybe victimizes--his jailbait models. Hayley, a self-styled decoy in the "To Catch a Predator" mold, commits to emasculating Jeff (and all that that implies), steadfast in the belief that he has sufficiently incriminated himself through his passive-aggressive responses to her Lolita shuck-and-jive. Though name-checked Roman Polanski's violation of Samantha Geimer is indefensible, I'm loathe to the wellspring of adolescent sanctimony surrounding the episode; and for a while, Hayley is so insufferably self-righteous that the picture looks as though it will concentrate the brunt of its commentary on the hysteria attendant to allegations of child molestation, credibly channelling the worst tendencies of organizations such as Perverted Justice through that most moralistic of creatures: the pubescent female.

What has tongues wagging is the tour-de-force castration sequence, although it's hard to imagine a scenario in which a castration sequence wouldn't wind up being the focal point of the conversation. (We're not that jaded yet.) Misery by way of Miike, it earns every ounce of dread leading up to it, and the denouement of this set-piece--Hayley flushing a pair of testicles down a garbage disposal--left me crestfallen in a way that no movie has since the destruction of the figurines in Dogville. And yet I wasn't offended until Jeff subsequently groped at his nether regions and relievedly declared, "I'm all here!"--we've been punk'd. Perhaps with an eye on the Sundance brass ring, the film actively renounces its low-budget privilege to be either a serious meditation on the whole soliciting minors for sex over the Internet phenomenon or quasi-feminist grindhouse schlock; you can sense that it wants to be talked about more than it wants to actually say anything. Proof lies in Hayley's convoluted rationale for springing her commensurately Byzantine mousetrap: Jeff was an accessory in the slaying of a local girl--the revelation of which retroactively transforms every piece of circumstancial evidence that Jeff is a pedophile into stuffing for a straw man. It clears your conscience of any compassion you may have felt for this prisoner of a suburban Abu Ghraib, for however Jeff's persecution goes down, he's getting his just desserts. Hard Candy leaves us to contemplate the antiseptic act of murder and the propriety of biblical revenge.

No surprise that screenwriter Brian Nelson started out as a playwright--Hard Candy is not so much small-scale as it is proscenium-bound. That's probably why, as fearless as the two leads are, the theatre-trained Wilson plainly has the home-court advantage: having honed her craft on television, a medium that breaks performances up into mosaic tiles, former child star Page is hung out to dry a time or two by the choice to linger on idiosyncratically perforated monologues so that the digital colourist (who receives an opening credit) can desaturate the image. Taking this virtual mood lighting into account, director David Slade apparently tried to compensate for the production's lack of resources by turning the staginess of the material into an aesthetic, even though he shoots in the defiantly cinematic Super35 format. It's a misstep, because the film looks all the more derivative of--and thus inferior to--landmarks in the hunter-becomes-prey genre like Ariel Dorfman's "Death and the Maiden" and David Mamet's "Oleanna" as a result. Re-reading Jonathan Rosenbaum's capsule review of Oleanna, Mamet's own underrated feature-film adaptation of his play, throws Hard Candy's essential timorousness into sharp relief:

"[T]he two characters are so evenly matched by the dramaturgy that they become Strindbergian antagonists in a life-and-death struggle--equally odious in their authoritarian reliance on institutions to define their own identities and equally crippled by what might be described as their political impotence..."

How I wish Hard Candy had the same courage to be ambivalent.

A much less histrionic tale of reckoning, James Marsh's The King strives for the same Zen calm as co-screenwriter Milo Addica's similarly lurid Birth but comes off as merely protracted. Swallowing his Mexican accent so that he sounds like Pee-Wee Herman's masculine bellhop from Pee-Wee's Big Adventure, the overexposed, generally unpleasant Gael García Bernal plays Elvis--no, not that Elvis (the pic's cheeky title and scattershot allusions notwithstanding), but a sailor who takes his leave of the Navy and tracks down his deadbeat dad, David (William Hurt, who could only be Bernal's biological father in the same metaverse where Marc Anthony sired Dakota Fanning), now a pastor living in Corpus Christi. Quickly turned away by the born-again family man, Elvis lures David's oblivious teenage daughter Malerie (the lollipop-like Pell James) into a clandestine affair, leading to a tragicomic In the Bedroom confrontation with Malerie's pious brother, Paul (Paul Dano).

When people accuse a movie of being made by a computer, they generally mean that it's drably conventional, prefabricated to a fault; The King suggests to me what a computer-generated movie would actually be like: discordant, amoral, and populated with Sims. While the picture has a defensible context for its Martian objectivity, tethered as it is to the sociopathic Elvis's point-of-view (and I suppose on one level, the absence of didacticism is laudable), its detachment doesn't seem entirely by design. It is, however, perhaps what a synthesis of documentarian Marsh's naturalistic impulses and Addica's manifest love for the taciturn cinema of the early-'70s was destined to yield. Text is swapped for subtext in The King; characters with implicit motives take implicit courses of action; and the whole thing washes out as a particularly leaden existentialist joke. Cast fruitfully against type as Paul's prim wife, Laura Harring paints a portrait of grief that provides fleeting moments of suture, but the filmmakers' stoicism finally proves insurmountable and indefatigable.

THE DVDs
Lionsgate (Maple in Canada) unleashes Hard Candy on DVD in 2.34:1 anamorphic widescreen. The razor-sharp image falls victim to mild ringing artifacts thanks to some utterly gratuitous edge-enhancement. If I have my intel correct, Slade oversaw the transfer, and the result is apparently deadly-faithful to the digital intermediate in terms of colour. (In fact, a bit of grain in the shot of Jeff driving Hayley to his house is the only organic compromise to the almost sterile perfection of the presentation.) Whites occasionally run hot, though I suspect this is a desired effect. Equally crystalline, the Dolby Digital 5.1 audio is by design not as mercurial as the film's palette, but it's a beautiful reproduction of an especially percussive sound design. Extras begin with two commentary tracks, the first pairing Slade and Nelson, the second Wilson and Page. Although I had my worst suspicions--that Nelson is daughter-whipped, that the film is a cynical plea for attention, that all involved have mistaken evasiveness for ambiguity--confirmed by the disc's extras, I found both yak-tracks thoroughly engaging. Admitting that she kept her distance from him on set, the charming Page takes this opportunity to get reacquainted with Wilson and by midway through is comfortable enough around her co-star to chirp the goofy non-sequitur "Hel-lo Mr. Sof-ty!" in reaction to a shot of an ice pack on Wilson's naked groin. Meanwhile, as articulate as Slade and Nelson are, the underlying tug-of-war between their visceral and cerebral sensibilities, respectively, makes for curiously compulsive listening. 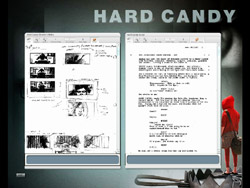 These yakkers own up to more digital trickery than does Cliff Stephenson's 7-part, 52-minute documentary, "Creating Hard Candy". Note Nelson's early remark that he wanted to write a script with a smart teenage girl as the "protagonist," citing Buffy the Vampire Slayer herself as an exemplar: sorta deciphers that Rorschach blot for you, doesn't it? (It ultimately pains me to criticize Nelson, who exudes genuine warmth and humility.) As on the Open Water DVD, a conspicuous amount of airtime is devoted to singing the praises of Lionsgate, but the sentiments are sincere. Indeed, the studio's marketing department rose to the occasion in preparing not only an enticing trailer but also an elegant, instantly iconic one-sheet for the film that capitalized on a Little Red Riding Hood motif Nelson insists was unintentional, the by-product of Page's scant wardrobe choices and Slade's gravitation to the colour red. Separate from the making-of "Controversial Confection: The Soul of Hard Candy" is a featurette as self-congratulatory as it is self-explanatory, and there's nothing revelatory among the 5 "Deleted/Extended Scenes" despite Hayley's precedent-setting use of Windex as a weapon. A handsome ROM interface (above left) allowing the user to browse Nelson's script and Slade's "notebook," Hard Candy's trailer, and a block of previews for See No Evil, An American Haunting, "Desperation", and Are You Scared? that additionally fires up on startup round out the supplementals.

TH!NKFilm shepherds The King to DVD in a purposefully hazy but sometimes unappealingly chalky and oversaturated 2.35:1 anamorphic widescreen transfer. In truth, the presentation is fine, yet I can't help but think it would be subjected to further refinement on a bigger label. More objectively flawed is the Dolby Digital 5.1 audio: dialogue is mixed much too low (there's hushed and then there's inaudible), necessitating a boost in volume well past reference level, at which point Max Avery Lichtenstein's inventive score sounds intrusively loud. On another track, Addica, dominating a feature-length commentary he recorded with Marsh, pulls a Wayne Kramer, accusing critics of living in ivory towers whilst pretentiously likening the film's slow-burn intensity to that of A Clockwork Orange, Badlands, and Le Samourai. (Hard to say which is worse: the defensive tone of this yakker or the needy, Marsh-penned "letter from the filmmakers" tucked inside the keepcase.) Also on board: a 7-minute block of expendable deleted scenes, one of which gives a face to the pair of breasts Elvis shags at the beginning of the film; and a superfluous video rehearsal of Bernal's big scene with Dano (3 mins.). The King's trailer caps off the platter, while semi-forced trailers for Little Athens, Down in the Valley, and 10th & Wolf automatically cue up prior to the main menu. Originally published: October 18, 2006.