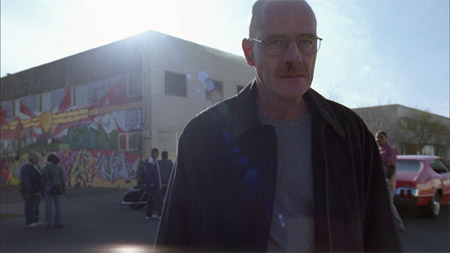 by Bryant Frazer Describing the ideal temperature for pan-roasting, Tom Colicchio advises budding chefs that the oil in the pan should sizzle, not sputter. That's an apt description of what Bryan Cranston does, with amazing physical control, through the entirety of the first season of "Breaking Bad". He resists going over the top, but still turns in a performance that could cook a steak.

Cranston plays high-school chemistry teacher Walter White with a 50-yard stare in a 20-foot room. He has the grim but fierce, piercing demeanour of a man who was resigned to illness before it was diagnosed. In the series premiere, he learns that he has cancer. He has it bad, and he doesn't have very long. His measly public-servant health-insurance plan won't cover risky, high-end treatment, and because he toils in the public school system, it goes without saying that his bank account is virtually empty. To generate enough funds to cover his care and provide for his family after his inevitable death, he sets himself up in a methamphetamine lab, blackmailing a local hoodlum and former student named Jesse (Aaron Paul) into serving as his distribution consultant and turning a scientist's methodology and eye for detail to the task. He cooks up the Best Shit Ever--although, as some great philosopher or other once noted, with mo' money comes mo' problems. And just like that, "Breaking Bad" is off to the races.

This is one of those outstanding serialized dramas that owes a great debt to "The Sopranos", which did the single-season story arc better than anyone. If you're like me--that is, if you find this style of episodic storytelling as compulsively consumable as potato chips dipped in dark chocolate--you'll get an enormous kick out of the first season of "Breaking Bad". It's not that it's soapy or trashy viewing along the lines of "Mad Men" or "True Blood" (respectively), but more that it's expertly and confidently paced. In its darkest moments, "Breaking Bad"--which reflects and refracts the current American economic malaise with artisanal clarity--is unutterably bleak. (Sometimes I felt like I wanted to turn the TV off, but what good would that do, so of course I kept watching.) But this first season is structured like a good novel, offsetting the grim terminal-cancer stuff with lighter, pulpier moments dealing with the vagaries of sexual potency, the finer points of methamphetamine-cooking, and various dilemmas associated with corpse disposal. The action ebbs and flows; one episode is riotously violent, another grimly focused on Walt's struggle with his illness. While Jesse's presence as Walt's reluctant sidekick feels a little forced at first, the rapport they build as episodes proceed becomes more tolerable and even enjoyable. The results are nicely balanced, like the chapters of a well-constructed novel, and each segment leaves you wanting more. Like, right now.

Then again, it's nothing like a perfect show in these introductory episodes. Walt's home life isn't nearly as compelling as his interactions with Jesse, with neither his wife (Anna Gunn), his special-needs son (RJ Mitte), nor his kleptomaniac sister-in-law (Betsy Brandt) drawn with any particular nuance. His brother-in-law, Hank (Dean Norris), is a narc who busts guys like Walt day-in and day-out, an obvious way to inject some tension into the proceedings. Series creator Vince Gilligan leans on cute, writerly frameworks that draw unwelcome attention to their artifice. The worst offender? One episode is framed, clumsily, by flashbacks in which a younger and more virile Hank, seen exclusively in silhouette and shot at what appears to be magic hour, mewls misterioso about the chemistry of the human body as though he were screen-testing for an Alejandro Gonzalez Iñárritu film. Occasionally, too, there are scenes and gestures--my sister is a kleptomaniac!--that seem better suited to a routine family sitcom than to a grim crime drama about cancer and crystal meth.

But that's enough complaining. In this first season of just seven episodes (the Writer's Strike brought production to a premature end), "Breaking Bad" firmly establishes itself as maybe the most downbeat TV series in recent memory--as well as one of the most viscerally exciting. That's a considerable accomplishment; though I have a lot of catching up to do, Gilligan's high-heat cooking style bodes well for subsequent seasons. My main question is where will he take this poor fellow next: Walt is an extraordinarily sympathetic character, but his moral standing (not to mention his expected lifespan) is so completely compromised so early in the run of the series that I wonder whether he'll find his bearings (and, dare I say it, redemption) later on, as the clock ticks towards his untimely demise. If Gilligan can handle an inevitable expansion of his canvas without letting narrative threads go slack--I complained above that Walt's family life is a little under-drawn, but I also know that one should be careful what one wishes for--things can only get better and tenser from here.

THE BLU-RAY DISC
"Breaking Bad" on Blu-ray adequately conveys the atmosphere of the dry Albuquerque desert. Shot on celluloid in Super35, the 1.78:1, 1080p image sparkles with the kind of tight film grain that comes to resemble oatmeal once the high-definition image has been compressed into smeary cable-vision and broadcast to its weekly audience. The show's aesthetic isn't exactly flashy, but Gilligan has a penchant for simple, oddball imagery that looks good on a living-room TV, like the brief overture to the pilot episode (shot by The Thin Red Line cinematographer John Toll) that consists of a pair of Walt's pants ballooning in the desert breeze, drifting groundward. Interiors tend to be very dark, or at least backlit with low fill lighting, and details often disappear into the shadows. The 5.1 DTS-HD MA tracks are strong enough but obviously made-for-TV. Despite plenty of bass in the sliding guitar line that underpins the show's theme song, directional sound effects and heavy use of the LFE are pretty rare in the actual episodes. When they do show up, the effect is merely practical rather than enveloping.

Two of the episodes are graced with group audio commentaries. The pilot has jabber from Gilligan, Cranston, Gunn, Paul, Norris, Brandt, Mitte, and editor Lynne Willingham. Honestly, that's too much of a good thing. Although it's fun to hear Cranston being a constant cut-up, and there is some entertaining and somewhat salty banter ("What's a pilot without a hand job?" someone asks), the interesting anecdotes generated by this sort of melee (AMC eventually decided that said hand job would not be seen in airings of the show before 10 p.m.) are too often buried in a deluge of run-of-the-mill back-patting and bland observations about locations and such. The second commentary (on 1.6, "Crazy Handful of Nothing") takes place with a slightly smaller crowd but adds writer George Mastras to the mix.

None of the bonus material here is especially riveting, but there sure is a lot of it. There's a high-quality if very typical behind-the-scenes featurette, "Making of 'Breaking Bad'" (11 mins., HD), with cast and crew interviews and B-roll footage. Also included are deleted scenes from episodes one, five, and seven. The source is mediocre-quality SD (perhaps Avid files from the editing room), though they've been upscaled to 1080i and encoded in high-bit-rate AVC to keep artifacts to a minimum. Unfortunately, it's a pain in the ass to watch them. Each scene must be selected individually from the menu page for the corresponding episode, which rankles because all of them are so short. (There's a 21-second gag deleted from the season finale that constitutes 15 seconds of actual scene and another six of the generic blah-blah-blah title card that's attached to every clip.)

"Inside 'Breaking Bad'" (32 mins., SD) collects 14 brief, themed segments with interviews and show footage originally created for AMC's promotional website. It's OK if you really enjoy cast and crew interviews or don't remember what you just watched. Fortunately, each bit is chapter-selectable, so you can sample without sitting through the whole thing. "Vince Gilligan's Photo Gallery" is a slideshow collection of 25 not-bad behind-the-scenes photos in HD--but as usual with these things, it would be nicer if the images were presented at full-screen resolution instead of within a much smaller window inside the 16x9 frame. The package is rounded out by run-of-the-mill screen tests for Paul, Gunn, Brandt, and Norris (8 mins. in total, SD) and an unremarkable instalment of AMC's now-cancelled Sunday-morning talk show "Shootout" (17 mins., SD), wherein erstwhile VARIETY Editor-in-Chief Peter Bart and movie producer Peter Guber trade pleasantries with Gilligan, Cranston, and "Breaking Bad" executive producer Mark Johnson (plus VARIETY critic Brian Lowry) as part of an episode that seems dedicated to discussing how swell is AMC's programming. Consign "Breaking Bad on AMC," a :60 standard-def letterboxed TV commercial, to the Completely Useless Extras file.

Finally, there are Sony Pictures HD previews for, um, "Breaking Bad" (this one a shorter 30 seconds), Michael Jackson's This Is It, 2012, The Boondock Saints II: All Saints Day, Black Dynamite, and Universal Soldier: Regeneration, plus the inescapable "Blu-ray Disc is High Definition!" promo. Originally published: November 3, 2010.