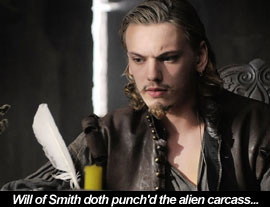 by Angelo Muredda Anonymous comes out swinging against the Shakespeare industry with all the force of a midsummer night's fart in the wind. If director Roland Emmerich and screenwriter John Orloff--a match forged in Mordor--had their way, the film would upend university curriculums, supplementing every Shakespeare syllabus with an elliptical "...but what if..." written in invisible ink on the last page. To that end, they've taken their baby on a tour of college campuses, and scheduled Facebook-webcast debates in which they've stunned Shakespeareans like James Shapiro with wise nuggets comparable to Adam Sandler's astonishingly incoherent address at the end of Billy Madison. It hasn't been clear sailing all the way, mind: popular historian Stephen Marche recently took to the NEW YORK TIMES to debunk such "prophets of truthiness"--Emmerich and Orloff are but a new, high-profile strain of Oxfordians, a group who name nobleman Edward de Vere as the true author of Shakespeare's texts, even the ones dated after his death--for advancing a lunatic conspiracy theory based on little more than class snobbery. Shakespeare scholar Holger Syme was even less charitable, proposing in a blog entry that has since become an Oxfordian recruitment camp fronted by Orloff himself that the film's chief sin is not historical inaccuracy but its filmmakers' posture as courageous iconoclasts, railing against established wisdom. Anonymous, then, has had a fairly storied pre-release career.

It's a good thing, too, because Anonymous itself is a piece of shit, as boring as it is pompous. In Emmerich's lone gesture to watchability, he gets just about the worst of it out of the way first, panning down from a laughable God's-eye-view of New York City to hone in on a scarf-decked Derek Jacobi strolling importantly into an old theatre with "ANONYMOUS" emblazoned on the marquee. Surely this is meant to signal maturity, trading in Godzilla's Big Apple smash-and-burn for the more academic (!) interiors of Broadway. And probably we're meant to think of the city-symphony of Manhattan, but Emmerich, high as he's aimed, accidentally recreates that moment in "Siskel & Ebert"'s opening credits where the cab driver gives Siskel a too-wide grin and an enthusiastic thumb up. No matter. Jacobi's task: to recite the WIKIPEDIA entry on "Oxfordian theory" to a bunch of chumps who've no doubt paid good money for a bad show, and to advance an alternative origin story for Shakespeare. So we enter Emmerich's long-gestating stab at the Shakespeare mythos, which focuses on de Vere (Rhys Ifans, giving better than he gets) in the closing days of Elizabeth I's (Vanessa Redgrave) regime. Oppressed as a child by the puritanical, anti-theatrical strain of surrogate parent William Cecil (a wasted David Thewlis) and snivelling, hunchbacked foster brother Robert (Edward Hogg), the Earl of Oxford toils away at composing seditious verse in secret before uploading his cache of plays to surly Ben Jonson (Sebastian Armestom doing Orlando Bloom). Unwilling to give his own name to the anonymous boon he's inherited and troubled by its genius, Jonson unknowingly deposits it in the hands of a rat-like actor by the name of William Shakespeare (Rafe Spall), who's only too happy to claim barn-burners like Henry V as his own, even if his illiteracy keeps him from scrawling his name on the cover.

And what a cover! That the film should present Shakespeare's oeuvre as a stack of leather-bound tomes saved for a politically opportune moment, filed away like cadavers in de Vere's "secret writings of Oxford" drawer, is bad enough. It's in the representation of Shakespeare as a preening, murderous, and illiterate ham, however, that Anonymous most clearly shows its hand as a crass hit-piece rather than a fun bit of historical revisionism. While this same material might have been a solid foundation for a pretty good piece of slash, or a decent Tom Hooper-helmed bit of "Masterpiece Theatre", Emmerich and Orloff don't seem to realize that it's pulp. They're hell-bent on delivering their outlandish argument with straight faces to the poor bastards stuck in Jacobi's dinner theatre.

Imprisoned by the self-imposed demands of this ridiculous project, Emmerich and Orloff get carried away into convoluted territory that would defeat good filmmakers. For one, Shakespeare and the Cecils have to be transformed into ogres to make de Vere, about whose character they know approximately nothing, sympathetic. Left with little to work with in the historical record, they instead turn their villains' bodies into grotesques: Spall's pathetic moustache tells us all we'll ever know about Shakespeare's fraudulence, while Thewlis is dumped under a pound of old-man makeup and parked in a rickety wheelchair, so you know he's bad news. Before long, the secret authorship thread itself spirals away (and with it the character who's reinstated as a genius) as the film labours to explain de Vere's curious parentage, and to make a case for how Shakespeare's plays were surely the work of a disgruntled nobleman obsessed with the "power of words" to affect political change. Beyond reciting that banal mission statement a half-dozen times and mouthing key lines from Hamlet under his breath, Ifans gets very little to do here, his part frittered away in lengthy, unnecessary flashbacks where his younger self (Jamie Campbell Bower) becomes romantically involved with a young Elizabeth (Joely Richardson, Redgrave's daughter). This romance exists mostly to set up a clumsily-staged revolt at the elderly Elizabeth's door in the last act. Emmerich's attention to the ear-shattering gunfire of the CG crowds spilling over into her courtyard suggests he's already moved on to his next disaster movie, as bored with this uninvolving political intrigue as are Jacobi's captives.

The strangest thing about Anonymous, though, is its utter disinterest in the work it so desperately wants to attribute to de Vere. In Orloff's impoverished imagination, each text exists only for the utilitarian dart he can retroactively hurl it at. A Midsummer Night's Dream? It's literally child's play, written by a prepubescent deVereSpeare as light entertainment for a twentysomething Elizabeth--who, in one of many head-scratching choices regarding the monarch, comes off as a pedophile. Venus and Adonis? A hastily-scribbled reminder of their love in later years, of course; a letter wouldn't do. Worst off is Richard III. Putting aside the historical pretzel Anonymous ties itself into by steering clear of the more appropriate, succession-focused Richard II, the film implies that de Vere quickly dashed off the play as a scathing critique of deformed men, meant to turn British subjects, as well as the Queen, against the younger Cecil. The audience responds as intended, pelting Richard with vegetables, completely unmoved by the canny rhetorical appeals that prove so effective to other characters in, you know, the actual play. The filmmakers can think what they like about the true authorship of these texts, but to reduce them to nothing but crude propaganda and to then argue that they ought to be re-canonized as such is to lower Shakespeare to the level of, well, Roland Emmerich. Mission accomplished? Originally published: October 28, 2011.