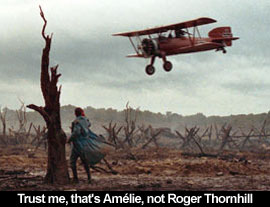 by Walter Chaw Jean-Pierre Jeunet reunites immediately with his Amélie minx Audrey Tautou in this curious little Great War bauble, which locates the last time the French were considered military powers in a story of cowardly self-mutilation at the Front that results in the obsessive search of one war widow for the erstwhile deserter fiancé she knows in her heart is still alive. The picture, in other words, blows the patriotic flute for both the French and the Yanks, who, surely coincidentally, are the two entities financing the piece. (It's also probably a coincidence that a period epic romance set against war is opening just in time for Oscar consideration.) A Very Long Engagement is a tale of suffocating, all-consuming love, thus it works as something like a bloody companion piece to the oppressive romantic illness of Amélie, going so far as to dip into that film's bag of tricks (the matte Paris, the heroine returning lost artifacts, the butter-smooth montage introductions, the affection for idiosyncratic secondary characters) and recycle its tone of freakish insouciance. Jeunet's latest is so charming that it feels aggressive--and so well made that the horrors of trench warfare have all the impact of a beautifully-dressed, slightly morbid department store window.

Mathilde (Tautou) has a limp and Manech (Gaspard Ulliel) asks her if it hurts when she walks. They court atop a lighthouse, consummate in a farmhouse, and a moment--maybe the only quiet one in the whole film--where Mathilde replaces her lover's hand cupping her breast as they sleep is breathtakingly romantic. The rest of the film, though, is a Rashomon clockwork wherein multiple witnesses, greased by Mathilde's doggedness, relate their disparate tales of Manech's fate, these anecdotes intercut with a parallel investigation undertaken by an embittered prostitute (Marion Cotillard) hunting down the deranged officials responsible for the death of her pimp. What disengages about A Very Long Engagement is that Mathilde's love comes down to gamine glances and a certain wide-eyed self-satisfaction--Mathilde's and Jeunet's in equal measure. It's a story told with the smugness of someone who knows the ending (Mathilde and Manech have a psychic bond: Jeunet's read (and written) the script), causing the events of its two-plus hours to land with the weight of an ornate minute-hand marking the time.

A Very Long Engagement ranks high among the year's most technically extraordinary films. Whatever its inconsequence and emotional vapidity, I confess a lingering affection, a downright admiration, for Jeunet's sideshow confections. He has a gratifying understanding of the poetry of synchronicity (used to best effect in his Delicatessen), a nice way with fabulizing the mundane, and a certain commercial aptitude that at its best reminds that the cinema is first a visual medium. The Rube Goldberg series of unfortunate events that leads to the explosion of a zeppelin in the world's least-prepared war hospital is, Jeunet-style, both deliciously choreographed and appalling in its conception. Jeunet may be France's answer to Terry Gilliam--but where Gilliam's trip to WWI in 12 Monkeys was filthy, Jeunet's gift and handicap is that the mud in his Somme looks clean enough to eat off. Even so, I appreciate that he names Manech's trench "Bingo Crépuscule" (possibly translating as "right on twilight" (translation of that pending)) and, moreover, I like how A Very Long Engagement touches again on 2004's fascinating mania for films dealing with a loss of memory. It's gorgeous filmmaking despite its failures as a narrative worth caring about. As time goes by, it's becoming increasingly clear that that might just be the seal of Jeunet's work. Originally published: November 26, 2004.