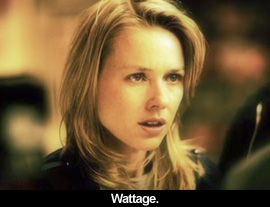 by Bill Chambers Alejandro González Iñárritu's Amores Perros was the first film in the wake of Pulp Fiction to wallow in criminal behaviour and monkey with chronology that still managed to stake its own cinematic claim (not the least of which, inaugurating the Mexican New Wave) far removed from the squatters in Tarantinoland, and if I found its fatalism terribly endearing, I realize now that I also derived a lot of pleasure from its trip-hop vibe, which served a function as the film's levity. To its great detriment, 21 Grams has no sense of humour: Iñárritu seeks to depress you with his English-language sophomore effort by weaving a tapestry of dejection and sorrow, but unless the sun breaks through the clouds once in a while, how can we lament it? That Iñárritu dismisses the human process of adaptation in examining the aftermath of a fatal car accident is only half the problem: he underestimates the swiftness with which an audience grows acclimated and eventually impervious to suffering, too.

Sean Penn is another liability. In the Nineties, his constant threats of retirement from the field of acting brought out a commercial defiance in him that was electrifying (think of his polarizing turns in She's So Lovely or Hurlyburly), but as he's made peace with his true calling, he's transformed himself into an actor (and a director, come to think of it) obsessed with extolling the sanctity of little girls. What is Penn in I Am Sam but a retarded Maurice Chevalier thanking Heaven for Dakota Fanning? In Mystic River, he romantically grieves for the murder of his daughter, while in two of his three features behind the camera, The Crossing Guard and The Pledge, surrogate Penn Jack Nicholson sets out to avenge the deaths of wee lasses at all costs. Though the masterful The Pledge consolidated enough avenues of discourse to lead one to assume an end had finally come to Penn's pre-emptive grieving over the corruption of the closest thing we have to angels on this planet, the motif reasserts itself with 21 Grams, in which the life of Paul Rivers (Penn) is so deeply impacted by the hit-and-run homicides of two female tots that he vows revenge against their killer. Penn doesn't embarrass himself in the role, but he's scratching a peculiar itch out of habit--there's no feeling left on that particular patch of skin.

Benicio Del Toro and Naomi Watts tender affected performances as the aforementioned killer and the mother of the deceased, respectively; both invoke their brooding star personae without really transcending it. Watts, the kind of platinum knockout described in the black-and-white age as bringing her own light (her name says it all), swerves back-and-forth between siphoning her natural, enchanting melancholy and coercing it. A devastating moment where Watts's downward-spiralling Cristina Peck chides Rivers for being nice to her ("You can't just tell a woman you like her") is rendered too distant a memory--torpedoed, actually--by Cristina's trembling solidarity as she looms over Paul's waking corpse, her arrested breathing and mucousy sobbing coming off as a plea for a Daytime Emmy. Saddled with the flavourless name Jack Jordan by screenwriter Guillermo Arriaga (whose christenings--one major speaking part is even referred to in the credits as "Gynecologist"--are almost satirically homogenized to meet the American status quo (wasn't one of the more interesting things about Amores Perros the fact of its ethnicity?)), Del Toro mostly unmemorably essays another God-fearing roughneck prone to stirring up tempests in a teapot.

21 Grams' time-hopping structure, its most-discussed and least successful aspect, draws attention to how familiar the other elements are; one wonders if Iñárritu leaned on the shopworn (using Penn's piety, Watts's heartsickness, and Del Toro's volatility as flash cards) to make the picture more decipherable. Owen Gleiberman speculated in ENTERTAINMENT WEEKLY that the story told in an A-B-C fashion would result in something duly conventional--that, in essence, a sense of intricacy is bound to emerge from watching the You've Got Mail DVD in "shuffle" mode. But Iñárritu has not simply thrown a jigsaw puzzle up in the air and filmed the splatter--he's working around missing pieces. When it dawns on us that Paul and Cristina have acquired bloodlust in the absence of any semblance of any credible emotional transition, the picture becomes something worse than conventional: evasive. Spurious and misanthropic, 21 Grams is a contraption without nuts and bolts, a skin-deep achievement (and here's an opportunity to mention that the film looks like Persona reconceived as a SHARPER IMAGE spread) that falls apart at the seams. Originally published: December 31, 2003.