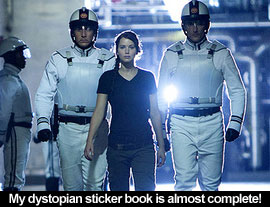 Now that the United States has remade Kinji Fukasaku's Battle Royale, it's fair to wonder when it'll tackle Ichi the Killer or Tetsuo, the Iron Man. It's all part of a greater conversation around what it is that made the U.S. more sympathetic to Japan after 9/11, whereas before, films like Fukasaku's grim little sociological masterpiece were seen as contraband in America. Marinating in social superiority only gets you so far, I guess, until the detonation of a WMD over a civilian population suddenly redraws the lines and changes your worldview. It's no accident that Suzanne Collins's series of tween dystopia books is wildly popular in this post-millennial zeitgeist--no accident, either, come to think of it, that the "Girl with the Dragon Tattoo" books, featuring brutal rape and unforgivable fantasy vigilantism (and a fetching girl-hero, it bears mentioning), were the rage of blueblood, blue-haired reading circles: grandma in the Times Square grindhouse circa 1974. What's genuinely frightening about the wide, middlebrow acceptance of such traditionally deviant fare is that it's a glimpse into what happens when a country founded by Puritans suddenly has its apocalyptic paranoia and hardwired xenophobia briefly confirmed. If you're a Republican with a moral barometer in these, our United States of America in 2012, take a good, hard look at what's happened to your party and tell me that I'm wrong. It takes a hell of a lot of crazy to make Margaret Atwood seem prophetic--to make Mel Gibson trend towards the middle.

So here's Gary Ross's hotly-anticipated The Hunger Games, a surefire blockbuster with a built-in audience and Twilight-like buzz, that has children slaughtering one another for the pleasure of an in-film audience as fatuous and free of self-examination as the "real" audience, which I suspect is coming to it because it's secretly a tween romance with a strong and courageous girl-hero who nonetheless gets an awful lot of help making it to the sequels. Something American remakes of Japanese flicks seldom get right (an exception being Walter Salles's underrated Dark Water), it seems, is that in Japan, the girl-heroes don't ever need men to save them--how alien a concept, right? More than that, it's a telling indication of the elements from Japanese cinema since the end of WWII we would like to emulate and examine now (nihilism)--and those we would choose to ignore (hopefulness). Tarantino uses Japanese cinema correctly in a sentence when he not only casts Battle Royale star Chiaki Kuriyama in Kill Bill, but also features an epilogue to that saga that reveals his girl-hero's greatest act of heroism is giving up the hero stuff (during which she did not need the intervention of a man) to be a mother. That's awesome. Less awesome is a film about kids killing other kids that treats this pretty lightly while under-developing a heroine who alternates wildly between smart and stupid, wily and clumsy. Note a moment early on where she misses badly in a demonstration archery shot, only to manage to shoot the apple out of a roast boar's mouth to make a feminist splash. It's all so very relatable: the awkward girl who goes to the prom with the captain of the football team, with no bucket of pig's blood in sight.

The girl is Katniss (Jennifer Lawrence), who volunteers for the titular Running Man-cum-The Truman Show deathmatch that pits two representatives from each of twelve impoverished Districts against one another, required to pay annual tribute to these very special Olympics in memory of some long-ago quelling of their uprising by a monolithic city-state. That's how we roll in the future...or is it actually THE PRESENT but THROUGH A GLASS DARKLY? No fair guessing, as Katniss and co-District "tribute" Peeta (Josh Hutcherson), hot for Katniss upon throwing a burnt loaf of bread at her (readers of the book will explain this to me, and I can't wait), are trained for the main event by alternately drunk/despondent and engaged/inspired Haymitch (a suddenly ubiquitous Woody Harrelson) and soulful stylist Senna (Lenny fucking Kravitz). Lady Gaga (Elizabeth Banks) is also around for a while but disappears before I could figure out who she was (readers of the book, see above). Also no fair guessing that Katniss has some survival skills, won from staving off Hunger in the Forbidden Woods around her looks-like-West-Virginia coal-mining community. Paula Malcomson (Al Swearengen's favourite whore, Trixie) plays Katniss's mother in the most egregious example of not using a brilliant actor in a film since Tom Hardy sat quietly around the edges of Inception.

If it's meant to be a profound statement on how an Empire like the U.S. strip-mines foreign nations for their natural resources while leaving them in resentment and backwards disarray, just fomenting the hell out of revolt, The Hunger Games fails to do much more than leave a faint, unpleasantly ambiguous racial whiff. Katniss's best friend in the game, see, is a young black girl who does what black people do in movies starring white people, i.e., save them, then die for them; later, a black guy will do Katniss essentially the same service. Katniss, meanwhile, vacillates between a clever survivor-type who makes the most of a scavenged rucksack loaded with bowie knife and rope, and a weepy idiot who wails to the heavens in a clearing while a group of people wanting to murder her is looking for her in those same woods. She is in one moment the master of the bow and in the other someone who doesn't think to retrieve the limited amount of arrows she has from the people she kills and, besides, doesn't seem to have the sense God gave a donkey when she stands too close to landmines. The problem is the same as J.K. Rowling's attempts at creating a sport with Quidditch, ultimately, in that as inventors of sports go, Rowling clearly has never played one. As writers of wilderness survival go, Collins is no James Dickey.

If The Hunger Games, on the other hand, is meant to be a social critique of our voyeuristic state, it's awfully squeamish about showing the reaction to the atrocities on display. Moments where Katniss is acting like a moron, for instance, would have been well-leavened by the play-by-play of colour men (Stanley Tucci and Toby Jones) remarking on how she's making a lot of noise, wasting time, and failing to arm her sidekicks despite numerous opportunities to do so. How about the crowd's reception of Katniss playing out (or doesn't, who knows; there are no hints in either performance or direction) the manufactured romance between her and Peeta? How about more insight into how the 1% lives, or why the games are called "Hunger Games," or why there needed to be a holodeck? There are no rules to the world, meaning that it's bad sci-fi. There are no parameters to the game, meaning that it's bad thriller. And there's no real interest for the non-initiated, meaning it's bad art.

As a heroine, Katniss lacks any kind of ambiguity: She does what she does to save her baby sister from getting slaughtered but, in the thick of it, she doesn't kill anyone who wasn't trying to kill her first. It's prosaic and uncomplicated. Imagine the scene where Katniss has to murder a completely innocent person because that's what the contest is. Imagine, wait a minute now, if Katniss were black. What The Hunger Games really wants to be is a tween romance--the Oliver Twist version of Twilight, complete with shocking treatment of children and stupid Dickensian names, all pulled into an incomplete vision of The Future hinging entirely on one girl's rebellion against an unfeeling world. It's Judy Blume with more dead children. If we establish that the picture isn't about anything, it's only fair to observe that the first hour is quite well-done: reserved and surprisingly spare in its use of music and melodramatics. The handheld vérité is tired, of course, but not until the action sequences does it become a nuisance. For a long while, I was sold. Somewhere around the arrival of the contestants in The Capitol, however, The Hunger Games goes to hell, complete with training montage, good actors like Harrelson, Donald Sutherland, and Stanley Tucci pretending they don't know they're in a very lucrative shit-show tent-pole, and time in the Games that we recognize as innumerable squandered opportunities for it all to be so much richer.-Walter Chaw

I was just imagine about it and you provided me the correct information I really bookmark it, for further reading, So thanks for sharing the information.