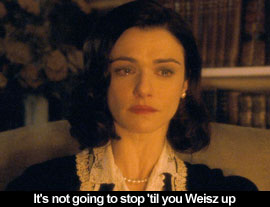 In Of Time and the City, Terence Davies's self-described love song and eulogy for his native Liverpool, the director halts his psycho-geographic walking-tour of old haunts at one point to pay backhanded tribute to the Merseybeat movement. With the meteoric rise of The Beatles, he pronounces in sulky baritone, the well-crafted love songs on which he was weaned became, overnight, as antiquated as curling tongs. Yet just as abruptly as pop turned beat, the young Davies went another way: "I discovered Mahler," he drawls, "and responded completely to his every overwrought note." Davies's studiously unfashionable gravitation to the Romantic, largely for its affinities with the torch songs he so recently mourned, finds apt expression in his sixth feature, a beautifully overripe adaptation of Terence Rattigan's 1952 play The Deep Blue Sea. Like its source, the film chronicles the misfortunes of Hester (Rachel Weisz), a judge's wife in postwar London who leaves her cerebral older spouse, William (Simon Russell Beale), for sexual fulfilment with wastrel Royal Air Force pilot Freddie (Tom Hiddleston), and subsequently finds herself unloved and in limbo. Only a recent convert to such reckless emotional indulgence, Hester, when we meet her, is very much the Mahler sort. Despite its apparent distance from more clearly autobiographical films like Distant Voices, Still Lives and The Long Day Closes, then, Davies is an ideal steward for this material--every bit as attentive to matters of exquisite sadness as his protagonist.

Davies is a master of impressionistic portraiture, and The Deep Blue Sea, too, unfolds as a kind of first-person record of Hester's narcotized daze in the hours following her failed suicide attempt after Freddie forgets her birthday: not the first such memory lapse, we have to assume. The skilfully-orchestrated opening, in which her aspirin and gas-fume cocktail sends her spiralling out of consciousness and sets the camera to tilt-a-whirl (Hester's blurred vision of the spinning room is nicely rhymed with the mental image of her body interwoven with Freddie's in what's presumably their first encounter), soon gives way to a more prosaic passage in the dingy apartment she's kept since her separation. You could fault Davies for showing off here, but he makes sharp use of this prologue to map the two spaces Hester always simultaneously occupies: that of the soft-focus postlapsarian world of landlords and milk bottles which comprise her bombed-out neighbourhood, and that of the past, represented as an out-of-body experience best triggered by barbiturates.

While Hester's present is smothered in cigarette smoke--she's often lit by jaundiced lamps that seem ever about to go out--the highlights of her past are typically bright by comparison. Two sequences in particular, both set to music, break up the routine. The first is a communal pub sing-along to "You Belong to Me," culminating in Freddie's private serenade to Hester, which fades into a recording of same and to a wistful and probably false memory of their slow-dance to it--the lyrics underscoring her uneasy claim on a man who ought to remember who he belongs to, wherever he should roam. The second, and most overtly fanciful, is Hester's hallucinatory trip into the bowels of the subway, on the verge of another suicide attempt. She remembers (or dreams) of Londoners huddled under the platform during a raid, singing "Molly Malone" as we track through a folk diorama that stops with Hester herself. It's a telling memory, given that we've already seen Hester nonplussed by her husband's gift of Shakespeare's sonnets; as always, Davies is attuned to the way people tend to mythologize themselves and their communal bonds through pop music, or at the very least through songs that strike at the right biographical moment, remixing them until they seem like a commentary on their own lives.

Hester is a plum role, and Weisz is more than up to it. So good at mitigating The Constant Gardener's hagiography of her absent spouse by fleshing her out in limited screen time, Weisz here is asked to play someone emptied of her charm, effectively dead by the time we meet her; a phone call where she pleads for Freddie to visit, unable to mask her desperation as she promises she won't natter away at him like usual, is both affecting and eerie. Though Freddie turns out to be a cruel drunk, in an odd way, it's Hester who most resembles Pete Postlethewaite's alcoholic father from Distant Voices: She's an addict well past the point of justifying her erratic behaviour to secure the thing she needs. At one point, William professes confusion at her recent compulsion for instant gratification, admitting he's inexperienced at "matters of this kind," namely sex. "So am I, Bill," she answers, just as baffled but unashamed. It's a terrific performance in a movie that strikes all the right overwrought notes.-Angelo Muredda