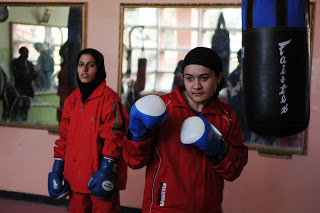 by Angelo Muredda Ariel Nasr’s The Boxing Girls of Kabulopens with clandestine footage of an execution in Kabul’s Olympic Stadium, where members of the Taliban force a woman to crawl before shooting her at close-range. That image haunts the alternately uplifting and sobering narrative that follows, which shadows the faltering Olympic hopes of a trio of young female boxers in a country where patriarchal attitudes toward women, particularly athletes, range from mild acceptance to violent hostility. This is a vibrant film, coloured by the verve of its protagonists, Shahla and siblings Sadaf and Shabnam, who speak candidly about their progressive values and their anxieties about the precariousness of their position amidst threats of assault and kidnapping. They’re presented as jocks, so it’s especially jarring when their future turns out to depend less on their athleticism than on the volatile political conditions of their country and its stance on the rights of women.

Nasr trains his camera on how these attitudes trickle down from government apparatuses and warring ideologues’ position papers to the off-the-cuff remarks of average citizens. Shahla’s brother, for example, vocally opposes their training – ostensibly because of the very real threats posed by more conservative men, who would happily regulate their household on their father’s behalf. Yet Nasr is wise not to take him at his word, later showing him scolding his sister for her lax decorum at dinner and quickly turning it into a referendum on the importance of disciplining women. The film gracefully links these charged domestic scenes to the political arena the girls are always necessarily in by virtue of what they do. But at heart this is a sports doc, and Nasr is just as adept at capturing the high energy of their training sessions, the exhilaration of their first encounters with proper rings in international competitions, and the deflation that comes from losing matches to women with far better training and far stronger financial and social support. It’s an absorbing profile, and at a mere 52 minutes, all too brief. ***1/2/****