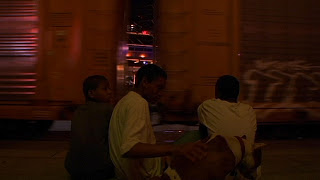 by Angelo Muredda Tchoupitoulas is a rare thing, an aesthetic antidote to the info-dump documentary tradition of talking head interviews and old snapshots. Described in the press notes as a night-time “piggyback ride” through the French Quarter, it’s more like a sweet re-imagining of James Joyce’s “Araby.” That short story culminates in a child’s dispiriting revelation that all that glitters in a bazaar is not gold, but Tchoupitoulasstrikes at something more ambivalent and certainly more beguiling, the bleary-eyed altered state of a 3AM comedown after a night of revels.

Our subjects are a trio of brothers whose bustling New Orleans home reminds of the McCallister house at Christmas in Home Alone, except full of good people. L.A.-based Ohio natives Bill and Turner Ross follow closely behind them as they take the ferry across the water and wander through the music and vendor-filled streets of the French Quarter, occasionally leaving to rove through more restricted spaces like a cabaret and a rock club. In the youngest brother William they have a charismatic narrator. A recurring motif, with which the film also opens, finds him recounting in hyper-articulate voiceover a series of dreams that are at least as surreal as Linda Manz’s narration about becoming a mud doctor “checkin’ out the eart’” in Days of Heaven. Terrence Malick seems a touchstone in other ways, too: a long twilight setpiece where the children roam through the haunted remains of an abandoned ship they call the Titanic – William briefly pauses to strike an MJ pose beneath the chandelier – is as free-form as the grass-stomping centrepiece in The Tree of Life. The brothers Ross jettison all pretence of found footage and simply refuse to account for why a camera crew might be invited on this voyage, particularly after the kids miss the last ferry and are presumably left roaming without adult supervision. It’s a smart move with a beautiful payoff: a high-energy, wondrous, and wistful look at boyhood that dispenses with banal questions about the adults behind the camera. ***1/2/****