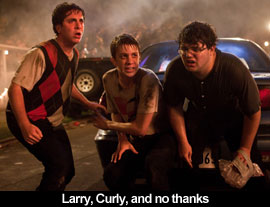 by Angelo Muredda With Bridesmaids, Judd Apatow made the case for the producer as auteur--a spiritual godparent to screenwriters' Kristen Wiig and Annie Mumulo's every deferred comedic beat. It's only taken one try--the perfunctorily- titled, written, and staged Project X--but Todd Philips can now claim the same, to everyone's great detriment. Late in the game, protagonist Thomas's dad surveys the wreckage of his vanilla son's soiree and says, with something like pride, "I didn't think you had it in you." It's a callback to the strained thematic machinations of The Hangover Part II, where straight-laced Stu (Ed Helms) recognizes he has a "demon" in him, and if that makes him a horrible spouse, then so be it. While Project X is suffused with the same deep misogyny and awe before Dionysian dickishness as its producer's directorial work, it's also a testament to Helms's grounded performance as those films' mild-mannered demon-in-wait--and proof of how unsustainable Philips's poisonous alchemy is in the hands of the truly useless. That would be first-time director Nima Nourizadeh, who has no instinct for narrative, characterization, or composition, and whose licentious camera unfailingly roves up the skirt of every 18-year-old extra lassoed in what the press notes eerily call a "nationwide talent search." Woe and hilarious Taser gags to anyone who searches for talent here.

The plot, such as it is: Sweater-vested dirtbag Costa (Oliver Cooper, the poor man's Jonah Hill) is throwing a birthday bash for Thomas (Thomas Mann, the poorer man's Michael Angarano), whose parents are going away for the weekend, leaving the house primed for Social Network-style Final Club house-party shenanigans or worse. The Pasadena-wide invite starts with superfluous third friend JB (Jonathan Daniel Brown, ostensibly funny because he's both fat and well-dressed), possible serial killer and camera operator Dax (Dax Flame), and Thomas's suspiciously-female childhood friend Kirby (the unfortunately-named Kirby Bliss Blanton), who's pre-emptively dismissed by Costa as unworthy of his best bro's interest on account of she's "one of the guys." Enter queen bee Alexis (Alexis Knapp), whose staggering upskirt-shot-count tells us she's objectively hotter than Kirby, until the movie, in a concession to the charms of supermodels next-door, solemnly decides otherwise. Alexis opens the floodgates to over 1000 other kids welcomed by text or by Craigslist, and we're off. Windows get smashed, dogs get launched by trampolines and balloons, dwarfs get stuffed into stoves, and nobody seems to have a very good time, though screenwriters Matt Drake and Michael Bacall repeatedly have randoms say, "Can you fucking believe this?" and, "This is one hell of a night."

But it obviously isn't. Apart from the dutifully iPhone-recorded, joyless moments of property damage and meticulously "found" footage of fleeting breasts, most of the debauchery is saved for the credits, which desperately stitch Hangover-cribbed images of "what really happened" with Fast Times-lifted "where are they now" captions. As if it matters. One unctuous character is said to have undergone three paternity tests as a result of the party, which is fascinating considering all we've seen him do is call people "faggot" and drink Cristal out of a chalice. For a teen sex comedy conceived by a bunch of assholes who just needed an excuse for a girls-in-rompers open casting call, Project X is painfully unfunny and remarkably sex-phobic: Poor Thomas gets scolded for even thinking about birthday sex, Kirby is such a paragon of neighbourly chastity that she might well be our man's LSD hallucination, and the only sentient beings who conclusively seal the deal are the dog (twice) and the unseen "Wheelchair Robby," who apparently got a handjob at another, much better party beforehand. Robby seems not to have gotten an invite this time, but he's a better man for it, believe me.-Angelo Muredda