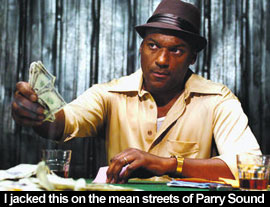 There's a nice bit in Alfons Adetuyi's debut feature High Chicago where gambler and aspiring cinema proprietor Sam (Colin Salmon) screens Ralph Nelson's Lilies of the Field for his wife (Karen LeBlanc) at a deserted drive-in theatre. The Sidney Poitier star vehicle, about a roving handyman who stops at an Arizona farm and meets a group of nuns who are convinced he's been divinely commissioned to build them a chapel, is a smart intertext for a movie about a man on his own quixotic journey to build a drive-in theatre in Africa, not least because Poitier's performance earned him the first competitive Oscar for an African-American man. This isn't the only time the film, set in 1975, recalls important milestones in black popular culture: Sam's slow-motion, funk-inflected entrance to the poker table in the opening scene sets him up as a contemporary of figures like Richard Roundtree and Ken Norton, while his high-stakes gambling spree is scored to Fela Kuti's "Let's Start." It's the most compelling example, though, because it rises above blank name-checking and provides sorely-needed context to a narrative that too often trades on clichés about gamblers going for one last game. There's probably a good movie to be made from the outline of brother Robert Adetuyi's screenplay, and surely something interesting about this yearning to trace a lineage of black entrepreneurial spirit starting from Poitier--an obvious target, but why not?--yet High Chicago settles short of the goal.

Part of the problem, as well as the biggest missed opportunity, is that the film is purportedly set in "Copper Cliff, Michigan"--actually Copper Cliff, Ontario, a mining community annexed to neighbouring Sudbury in the early '70s, around the time the film is set. I mention this trivia not only because I happen to be from Sudbury but also because the film advances an odd sort of regionalism without region in this half-hearted commitment to being set in a particular place--frequently honing in on signs that announce where we are and filming primarily on-location, wherever that is. Funded with Northern Ontarian money, Adetuyi and crew make good use of Sudbury's charmingly ramshackle downtown core and especially its infamous smoke stack, which creeps up in the background like a haunted totem in every shot with a car window. But this is a mining town, and while mining is Sam's day job--along with everyone else's, it's briefly suggested--we get little sense of either the tight economics or the physical toil this entails, making his repeated claim that he has to get out of this dump, fast, feel strangely unmoored from reality. The decision to set Sam's minor tragedy in an imaginary sector of Michigan that looks to house only his family and his poker buddies also feels like a demographic sleight of hand, insofar as it denies us any insights into what it means to be a black miner in this time and place.

Instead of exploring their potentially fascinating milieu, the brothers Adetuyi dwell for far too long on the nondescript pub in which Sam indulges what other characters repeatedly call his serious gambling and alcohol addictions, both of which seem pretty well in check, actually. These gambling scenes, particularly one that culminates in a violent showdown with a blue-suited high-roller, are dully scripted and needlessly protracted. They do little to nuance Sam's big dream, which can be difficult to process, for his exasperated wife and the viewer alike. 1975 is a bit late for a back-to-Africa scheme by a man who otherwise seems to have only vague cultural ties to the continent, and who, apart from his interest in Poitier, appears more interested in projector technology than in the films he'd be screening.

All the same, Adetuyi has a good eye for production design, and for a first feature, High Chicago is mercifully light on the needless experimentation with film stock and fast cutting that mars other debuts. His camera is steady and his framing cleanly establishes characters' positions with respect to one another in space, which feels refreshing amidst haphazardly-assembled pop extravaganzas like The Hunger Games. It's also nice to see strong actors like LeBlanc (excellent in Charles Officer and Ingrid Veninger's Nurse.Fighter.Boy) and Salmon getting good roles, even if their characters fall on the stock side of things. A British actor best known stateside as M's yes-man in some of the recent Bonds (or, depending on your frame of reference, for getting carved up into cubes by lasers in Paul W.S. Anderson's Resident Evil), Salmon delivers whenever the script lets him.-Angelo Muredda

High Chicago has its Toronto premiere on April 14th at the 2012 ReelWorld Film Festival.