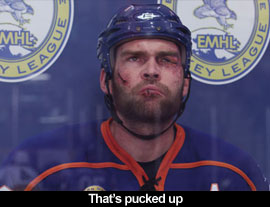 by Walter Chaw The best hockey movie since Slap Shot and the most pleasant and well-meaning Canuck-sploitation flick since Strange Brew, Michael Dowse's Goon is a prime example of how to make an insightful guy-movie without indulging in the cheap scatology of American Pie and its offspring. Not that there's anything wrong with cheap scatology, mind, only that it seems played-out, and so it's something of a revelation to find that franchise's own secret weapon, Seann William "Stifler" Scott (who, let's face it, is impossible not to like ever since he was brought to orgasm through manual stimulation of his prostate in that franchise), so quiet and unassuming in the title role as dim, sweet Doug Glatt. Doug's a natural-born bouncer in an armpit dive, see, who, after laying out a local bruiser taking his beef into the stands, is offered a shot at becoming a full-time enforcer for a bus-and-motel league. He shows up at his first practice wobbly in figure skates, proceeds to give his teammates a sound beating for their hooted derision, and is promptly called up to the bigger minor-league team the Halifax Highlanders.

It's invested in masculinity as a pain ritual and it characterizes hockey as a gladiator bloodsport; every moment on Goon's ice feels predatory and claustrophobic. Doug has no skills beyond breaking heads, and there's real sweetness in the reverence he has for his situation. Over dinner with his disappointed parents (fellow Pie vet Eugene Levy and Ellen David) and gay doctor brother (David Paetkau), Doug pleads that they recognize he's pretty stupid and that playing under contract for a minor-league hockey team is probably the best he could hope for in terms of success. It's a poignant moment played dead straight without a hint of Gump-like shit-eating wise-'tard film wisdom--just a big, dumb lug asking that his parents be happy about what makes him happy, not what they believe will make him happy. It's the same plea Goon makes on his behalf to us, really: that we accept that the veneration and fellowship he earns by spilling pints of blood, his own and others', is the only bliss he'll know--and enough. Veteran goon Ross Rhea (Live Schreiber), celebrated for a long career in beating the shit out of people on the ice that's coming to an end after a string of concussions, makes for a wonderful villain. He's the exact cagey counterpoint to Glatt's unaffected simplicity, bound by the same understanding that their role as professionals is to act out the bloodlust of an arena full of fans.

Doug's best friend is foul-mouthed Ryan (co-writer Jay Baruchel), who, in an odd twist, essentially fulfills the Stifler role. His love interest is sweet-faced Eva (Alison Pill), who never lands as a completely credible character, but functions well as the Dulcinea to Doug's bruiser Quixote. Goon's ending recalls the last few minutes of Robert Aldrich's The Longest Yard, while the operatic climax suggests Raging Bull, clarifying that the filmmakers had something more on their minds than an occasionally-grotesquely violent celebration of boys being boys. And though the spectre of the recent suicides of real-life hockey enforcers Wade Belak, Rick Rypien, and Derek Boogaard (and a remarkable, honourable NEW YORK TIMES article by John Branch about the culture of enforcers in hockey) hangs over Goon like a cloud of disquiet, the film itself is less a celebration of Doug's actions than one of finding a niche in a life and living the hell out of it. Sweet, minor, the picture is also an analogue for Doug: There's nothing deeper to Goon than the message that there's something, and someone, for everyone, and that often, what's most in the way of us finding our bliss are the expectations generated outside the heart of it. Goon's an inevitable cult classic with an endlessly quotable screenplay, committed performances, and a tough-guy ending with just enough ambiguity. It's a winner, eh? Originally published: April 13, 2012.

Married to manage bloody gore and sweetness into one damn near irresistible package (so much harder than what it seems to be). Nice to see Scott bounce back, Liev always elevates everything he's in, and it mostly gets the hockey bits right. Thanks for the rec, might never have seen it without your review.