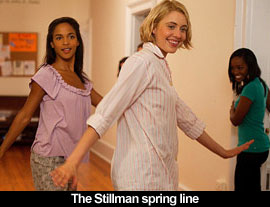 Damsels in Distress is a hard movie to sink your teeth into--a stick of gum soaked in brine. Whit Stillman's first effort since 1998's The Last Days of Disco, it's a light-headed fantasia that's committed to its gonzo vision, best expressed by a character who calls her favourite soap scent "very precise." Very precise, indeed: Less wealthy than Metropolitan's socialites, Damsels' cadre of female sophomores breathe even more rarefied air. Though each actress works her peculiar cadence into these pronouncements to uncanny effect, they seem possessed by their creator even more than is typical for Stillman's characters, genteelly handling accusations of hypocrisy with defenses like, "We are all flawed. Must that render us mute to the flaws of others?" Stillman's rigorously formal dialogue is always a trial-by-fire for actors--easily passed in Last Days by Kate Beckinsale, for example, but stumbled over by Matt Keesler, who looks embarrassed to identify as a "loyal adherent to the disco movement"--but something's different this time. Always accused of being hermetic but usually too enamoured with other people's ephemera (e.g., collections of Scrooge McDuck memorabilia) for that to be true, this time he's properly set up shop in the projection booth at the back of his mind.

The setting is Seven Oaks, a fictional East Coast college that's only recently gone co-ed. Transfer student Lilly (Analeigh Tipton), our initial audience surrogate, is immediately befriended by aforementioned soap-aesthete Violet (Greta Gerwig) and prim subordinates Rose (Megalyn Echikunwoke) and Heather (Carrie MacLemore). They're on a mission to rejuvenate the moribund student body through a regimen of hygiene and tap dance, offering free lessons (and donuts) in the Suicide Prevention Centre they run. Violet doesn't think much of Lilly's interest in exotic older grad student Xavier (Hugo Becker), preferring on principle the company of borderline illiterate "sad-sacks" like frat-boy boyfriend Frank (Ryan Metcalfe), whose lack of good looks and basic sense strikes her as an opportunity. Before long, though, her sunny demeanour and faith in the power of intervention are progressively broken down by cynics like "Daily Complainer" editor Rick DeWolfe (Zach Woods, a dead ringer for Stillman stalwart Chris Eigeman) and by Frank's infidelity with her newest protégé, Priss (Caitlin Fitzgerald). The fallout sets Violet on a path of reinvention that diverges from Lilly's more conventional turns to Xavier and, on occasion, mysterious "strategic operator" Fred (Adam Brody), who Violet knows from another life.

This set-up is awfully convoluted, but Violet's depressive crash ("I prefer to think of myself as being in a tailspin," she says) feels real enough. Stillman's films are all vaguely autobiographical, and Violet might be his closest avatar yet: a hyper-articulate, out-of-time idealist who's well-educated and theoretically wealthy without seeming to have any actual money. Although Violet's fixation on starting an international dance craze called the Sambola is a cute wink too many, Gerwig finds integrity in an android whose programming consists largely of Penguin Classics editions of the western canon. "I find that very attractive," she admits when Fred turns out to be a fraud, and there's something touching about her open interest in his deception, her appreciation of his need to present himself as a character in order to feel confident enough in his skin to actually be a strategic operator. For Violet, whose own origins are unremarkable, a life unmediated by elaborate projects and periodic theatrical reinventions is hardly worth living.

That's a fairly novel sentiment, but while the film's own protean shifts from comedy of manners to bitter satire to musical are exhilarating at first, they eventually become tiresome--the product of not just confused characters but also a script that can't decide on what it is. I'm not sure this indeterminacy falls on the right side of the fruitfully ambivalent/lazy dichotomy. Towards the end, we discover that Violet's in a class called "Flit Lit," on the dandy tradition in literature. We see her professor mulling over the borderline status of inheritance-draining novelist Ronald Firbank: "He was too unserious in his unseriousness," he quips. Self-awareness is always nice, but it doesn't make Damsels in Distress a great movie. Often compared to humorist P.G. Wodehouse (another dandy), Stillman at his best combines that offhandedness with respect for even the most odious of his yuppies. Not so, here: Frank's a slug, and Xavier's Cathar faith is merely the pretense for an extended, not very funny joke about anal sex. The closing musical number is fun, but feels unearned and frankly hollow next to Last Days' utopian subway dance to "Love Train." Call it too unserious, even for Stillman.-Angelo Muredda