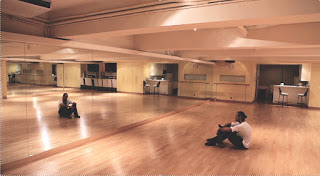 There’s plenty of everyday drama here, but Ballroom Dancer is hampered by Anna’s growing disinterest in training and presumably the documentary. For those of us who can’t appreciate the technical nature of ballroom dancing, she’s the only real access point to her brooding partner. Her blankness, coupled with Bonke and Koefoed’s brave but misguided aversion to showing archival footage of the Slavik-Joanna partnership, makes it hard to tell whether Slavik has lost something physically or just can’t get it together with his new partner.  It’s not that he’s a poor subject: his insistence on better articulating himself in conversation with one of his many trainers (a rotating cast of counsellors) proves him to be as pensive as he is graceful. But without a clear sense of his strategy or personality, the film’s dourness takes its toll. **1/2/****